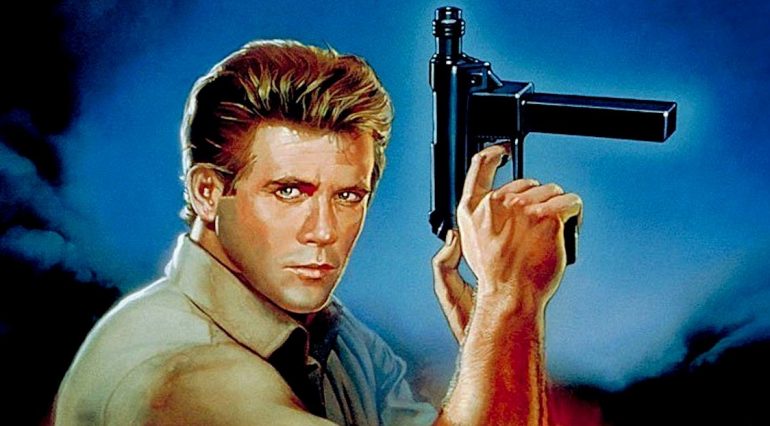 Michael Dudikoff is an Avenging Force (1986)

Plot: A senator is targeted by the Pentangle, a right wing paramilitary group. His friend, a former CIA agent and martial artist, tries to help him. The group kidnaps the agent’s sister and tries to hunt him down, “The Most Dangerous Game” style.

It had been a few years since I watched Avenging Force with Michael Dudikoff and I forgot just how ridiculously entertaining it is. I never realized how similar Hard Target was in terms of story and location – people being hunted for sport in Louisiana.

Rather than Lance Henriksen as the villain however, we have the late great John P. Ryan (Delta Force 2) who plays Prof. Elliott Glastenbury, a white supremacist nutjob who leads the hunts but also wants to take out Larry Richards (Steve James) who is running for Senator. Sadly it’s a story that could still be relevant today especially if you’ve been keeping up with the news…

We all know this was initially meant to be a sequel to Invasion USA as Chuck Norris originally played Matt Hunter but he didn’t return for this movie and was replaced by Michael Dudikoff. It was rewritten for him and became a standalone tale rather than a sequel.

Dudikoff always brought easygoing charm and likability to his roles and he is a complete hero in this movie who will do anything for his friend Larry even stating at one point “Your fight is my fight. You just remember that”.

There is no shortage of action with fight scenes every few minutes keeping the pace going nicely and it has a high bodycount too.

Watching Steve James teaming up with Dudikoff and kicking ass was always awesome but it’s still such a shame that James was taken from us too soon as he passed away at the age of 41 (my age now).

Watching the movie today some of it can come across as unintentionally humorous however, it can be pitch dark at times with the scene of Larry being killed then his wife and kids being shot still shocks to this day. It just makes you hate the villains even more so when they get what they deserve it’s all the more satisfying.

The funny parts got me thinking that we need to create a drinking game for this movie for 1) any time someone rolls on the ground during an action scene and 2) any time James P. Ryan looks totally batshit crazy. He has one of the best character introductions of all time; during the opening scene two men are being hunted through the Bayou by Glastenbury’s goons who all look like something out of Mad Max with gimp masks and leather attire. Then we pan up to a tree where Glastenbury is standing wearing a bizarre Mardi Gras mask while smoking a pipe, because the main thing you would want to do while hunting people for sport is smoke a pipe in a tree.

Aside from that though Avenging Force is a great ride packed with action, Dudikoff at his badass best and some truly hateful villains. It was very much open for a sequel but it didn’t make enough money at the box office for a follow up. Too bad as watching Pentangle villains getting smashed is always fun.