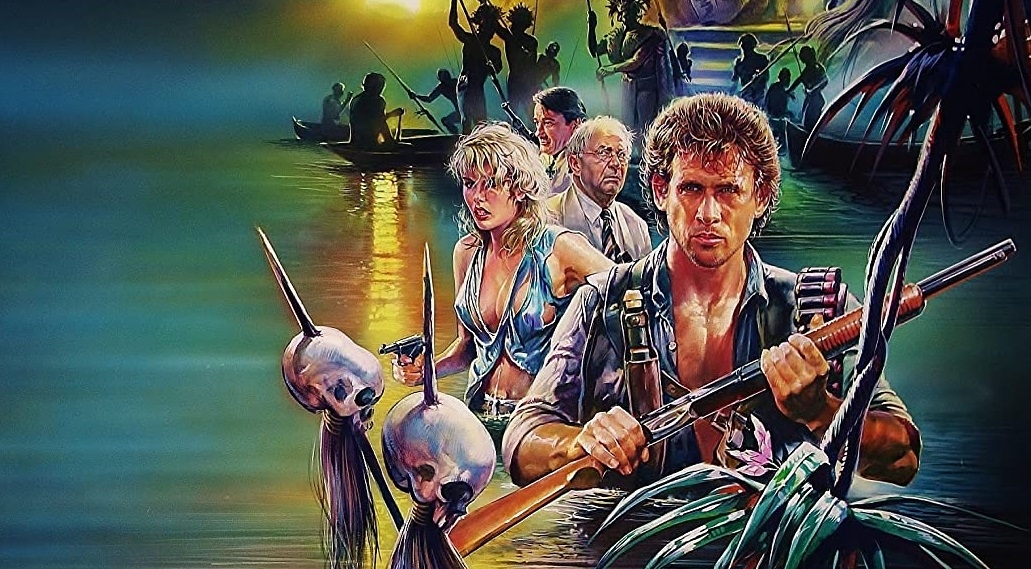 River of Death is a Cannon movie that isn’t talked about as much as say American Ninja but with a cast that includes Michael Dudikoff, Donald Pleasance, Robert Vaughn and L.Q. Jones it deserves an audience.

Based on the Alistair MacLean novel of the same name and tells the story of a guide (Michael Dudikoff) who encounters cannibals, Nazis (Robert Vaughn, Donald Pleasence) and a lost city in his search for a kidnapped client in the 1960s Amazon.

It’s a rather strange beast as it isn’t exactly packed with action taking a while to get going but feels like Indiana Jones meets Apocalypse Now with a side order of Joseph Mengele.

Robert Vaughn is the evil Nazi scientist (amazingly named Dr. Wolfgang Manteuffel) hiding out in the jungles of South America (despite being filmed in Africa) with Donald Pleasence seeking revenge on him for shooting him years earlier. That’s when Dudikoff’s guide John Hamilton comes in as he wants to find a lost city where one of his previous clients was kidnapped. There’s quite a lot going storywise with each character having their own motivations for finding the lost city which is why it takes a little long for the action to kick in.

John Hamilton is wonderfully surly and not all that sympathetic at first but Dudikoff’s James Dean looks and charm make you like him anyway.

Enough hasn’t been said about the music score to River of Death by Sasha Matson; it doesn’t sound like anything you’ve heard before creating an almost dreamlike atmosphere but never whimsical. You would expect Indiana Jones style rousing adventure music but that’s not what they were going for with this movie and it fits the tone which is generally serious. There are very few jokes but that is one of the reasons it all still holds up so well; there are moments of horror as well as action with Dr. Wolfgang Manteuffel proving pure evil.

In terms of action there are some impressive explosions, brief fights and shoot outs so if you’re expecting American Ninja in the jungle you’ll be disappointed.

The 88 Films DVD I bought recently is wonderfully remastered with near perfect picture and sound; too bad there are no subtitles though as I need them for most movies.

Overall, River of Death may not be quite as action packed as other Cannon pictures but the cast alone makes it worthwhile and any movie starring Donald Pleasence is worth a blind buy.