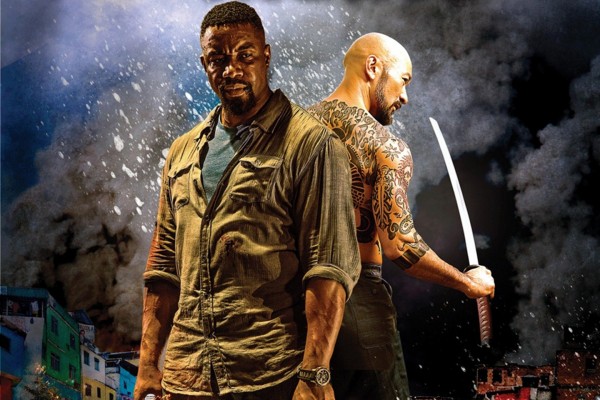 In an Action Elite exclusive, we chat with actor Michael Jai White where we discuss The Dark Knight, Undisputed, The Expendables, Black Dynamite, Fast and Furious 7 (which he may or not be in) Blood & Bone, Arrow (and a potential ‘Suicide Squad’ Spin-off), Skin Trade, Favella and… Saved by the Bell.

Stay tuned for a cameo appearance by martial arts legend Tony Jaa and some great out-takes at the end.

We also have random butlers and clatter in the background, but being the seasoned pros that we are, we were unfazed.

*Side-note: upon watching the video I noticed that I actually said The Dark Knight Rises at one point, but I meant The Dark Knight; hey, it was 1 in the morning, OK!?!*

About Michael Jai White from his Official Site: Michael Jai White is a legitimate holder of eight black belts of varying degrees in eight different Martial Arts forms. Beginning his Martial Arts training at the age of eight and achieving his first black belt at the age of twelve, he now has over twenty years of experience. Originally a student of the legendary Shigeru Oyama , (at the time Shigeru Oyama was the world renowned head of the U.S. Kyokushin Karate Association) he is now the head of World Oyama Karate. White went on to achieve a black belt in seven other karate styles; Shotokan, ITF Tae Kwon Do, WTF Tae Kwon Do, Kobudo, Goju Ryu , Tang Soo Do and the Superfoot system. Michael just tested for and earned his 8th blackbelt at the JLFS/Superfoot summer conference(October11th 2013). He has also had years of Wu-Shu Kung Fu training under current American Wu-Shu team coach, Eric Chen. White has trained privately with the likes of Bill” Superfoot” Wallace, Benny ” The Jet” Urquidez, Shihan Bobby Lowe, Shokei Matsui, Jean Claude Van Damme, James Lew, Don ” the Dragon ” Wilson, Peter Cunningham, Billy Blanks, Gene Lebell and Joe Lewis. White has also worked behind the scenes on stunt fighting sequences with Steven Segal. White himself has amassed countless trophies, awards and Grand Championship honors from open “point System” to inter-federational tournaments both home and abroad Throughout his twenty-plus years as a Martial Artist. U.S. Open, North American J.K.A., World Knockdown Free sparring Champion are among many titles donned by White before moving to LA to continue his already successful dramatic acting career. Although in the midst of the glamour and glitz of Hollywood White maintains that he is a martial artist first and still maintains skills competitive to any current champion of “fight” or “form.” “Regardless of what I’m into I always want to be able to get on the training floor with anyone at any time. I am a Martial Artist, first. I apply my Martial Arts discipline, focus, strength, and spirit to my life as well as my acting work. It is a way of life. Life cannot physically or mentally put me through more than I have voluntarily traversed through Martial Arts training. I am ready for anything. From the “Mike Tyson” story to “Spawn,” four to five months of rigorous filming at a time can’t touch twenty years of sweat.”