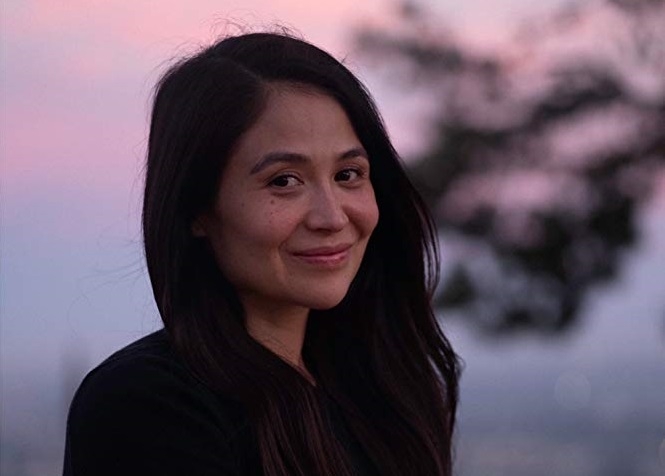 Mindy Kelly Interview on The Art of Self-Defense

She stopped by to talk about working on the film.

How did you get involved with The Art of Self-Defense and what appealed about the project?

I got involved because the cinematographer Michael Ragen introduced me to Riley Stearns about a year before I got sent a script. He was looking for female department heads and I come from the music video background but I also did stunt coordinating and I’m a martial artist so he felt that I fit the description of whatever he was looking for. Then I got sent the script and two months later we were filming.

How did you find working with director Riley Stearns?

A dream; I feel like I don’t know if every movie is like this but I hope so (laughs).

You wore many hats in this movie; how did you juggle everything around?

Well like I said I come from a music video background so you don’t have a lot of time and limited resources so I just did what I had to do to get the job done and by stunt coordinating you are not only finding the talent to double actors where you’re trying to make the director’s vision come to life. Choreographing and designing the scenes, teaching the actors what they needed to do in order to their job. I had a week to train Jesse and Imogen and a day to train Alessandro. Alessandro was on set Monday practicing his kata with his dialogue. 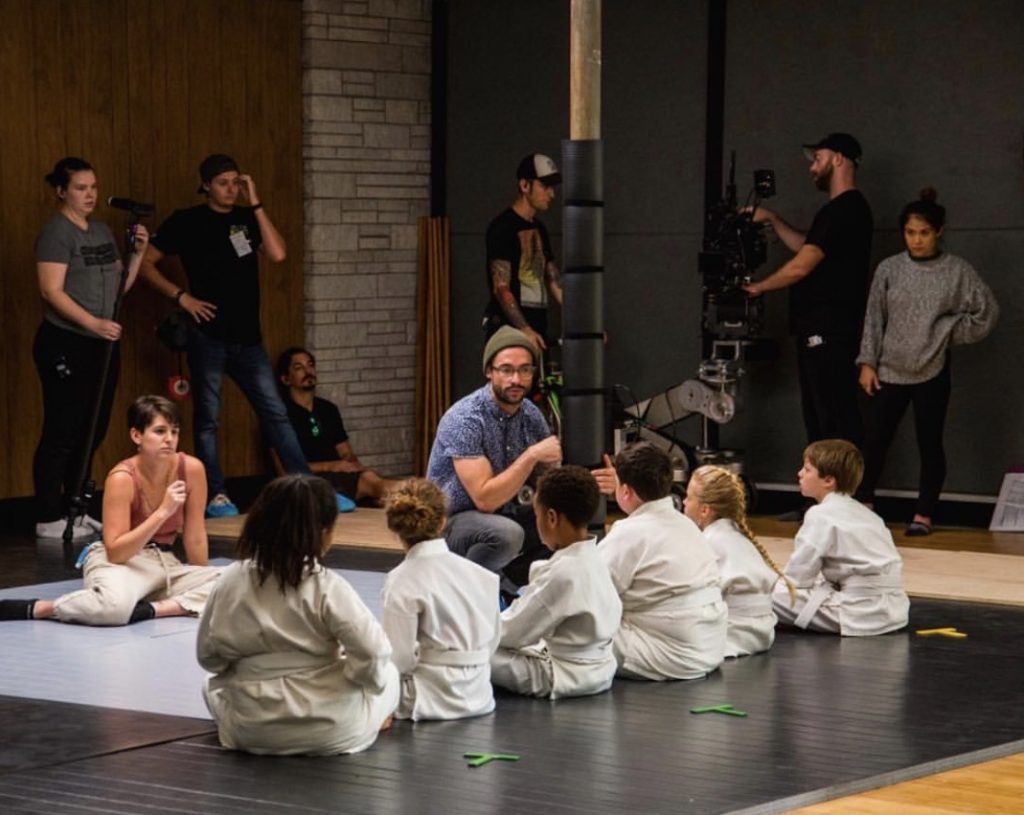 Did any of the cast have any training beforehand or were they starting from scratch?

Training them from scratch; none of them had a martial arts or dance background. I mean all of them have a little bit of fight background from their movies but martial arts is a totally different beast. For Jesse I started off teaching him the foundations of what it takes to be a yellow belt in the world he was living in. The same for Imogen whose world was a brown belt. So I taught them that then I also taught them fight choreography and what was going to be required for them for their development within the story; then also the stunt scenes and fight choreography. I had two hour blocks for five days where I trained Jesse for two hours then I trained Imogen. Then after that I watch how people retain information then I choreograph accordingly to that while also making sure it captures Riley’s vision. You have to consider movement as an extension to one’s psyche and Riley created this unique world that’s still grounded in a gritty reality which provided a perfect platform for the actors to tell the story through their body movement. I like to think of it like playing a piano where you can play a note but it depends how you play it; so you can throw a punch but it’s how you throw a punch and what is the emotional drive behind that punch that makes it interesting and I wanted it to be Jesse’s journey. I wanted to see Jesse do a front jump kick (laughs) and that was my main focus was getting them prepared to do that.

(laughs) Which also added to the choreography so when Jesse is fighting the cop and he disarms the cop where he has the gun; he takes a moment and looks at the gun. He decides “oh I know martial arts. I don’t need this gun.” He then gets rid of the gun and uses his karate to take down the cop and then… that whole scene (laughs).

And that was Jesse himself doing that in the scene wasn’t it?

Yeah! I didn’t know what that scene would be like until I got to Kentucky to see where the actual location is so I choreographed according to our environment. So I thought “I haven’t seen anyone get killed on a fire hydrant before so that may be cool” (laughs) and then Riley laughed and giggled and thought it was cool. 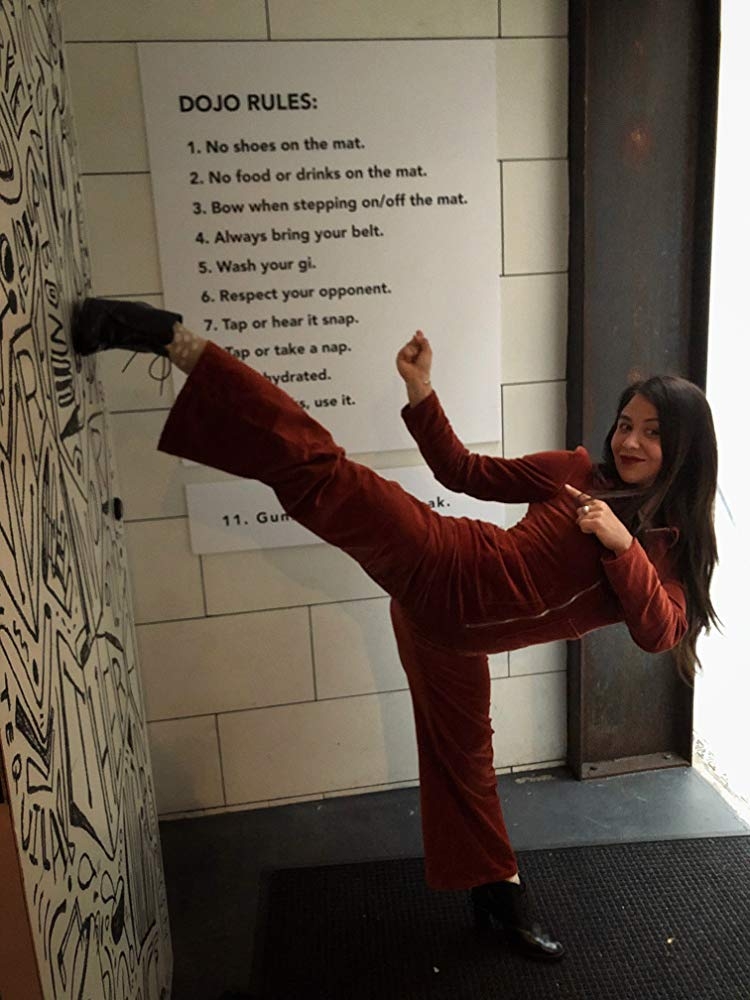 You also have scenes with young kids performing martial arts; how did your methods change for them?

Well Imogen’s secret weapon was that she studies jiu-jitsu and also Riley Stearns is a purple belt in jiu-jitsu so the way that she took down Thomas in the night time class is her using her jiu-jitsu techniques against him which like no one really knows that’s taken from outside of the movie but that’s what she’s teaching the children. I think that’s such a cool thing because she is forced because she is a woman to take the children’s class. What I found was so great about that scene is that these kids have such a strong female role model in their life so that meant something to me. The kids were great too (laughs)…

What was the toughest scene to put together?

I would say the most complex scene was the cop one that was outside; it was so cool cos it played out in a wide shot which is really hard to do from start to finish and make sure it flows. They drive in, there’s a fight scene and the other people come in on motorcycles and they exit the frame and keep it all tight which had me going “YES!” because it’s a very complex scene with very different components that are in one scene. So that was probably the most difficult scene but also it turned out really cool so I’m really excited (laughs). Also the gym fight was my favourite (laughs) just because we have a stunt double come in and block out the scene full out with Thomas played by Steve Terada who is also a martial artist as well. The stunt double and he blocked it out twice and the whole crew was thinking it was crazy. I was sitting there quietly in the corner knowing what Imogen was about to bring and when she stepped in everybody’s mouth just dropped and were like “oh my gosh!” and I was like “Yeeeaah!” so I was the proud sensei in the corner. She absolutely killed it. Everybody killed it – Alessandro, Jesse… I mean Jesse is running and getting hit on the head in the beginning scene. Jesse can run fast but there were so many moments where I felt like a proud sensei (laughs).

How challenging is it to make each fight scene seem different?

Well you’re telling a story each time so when Sensei and Jesse are fighting the way that I choreographed it was that Jesse is only supposed to do chop punches so he’s not really meant to do a jump front kick. He goes and attacks Sensei and he blocks him and then he gets frustrated and tries a ridge hand and gets slapped in the ear because the Sensei is like “how dare you disrespect me” and then Jesse gets really frustrated and does a jump front kick and then Sensei blocks him and uppercuts him. He was not supposed to be doing this being new so the Sensei was like “don’t disrespect me in my own dojo”. That’s how I created that scene as well.  So very much I’m just trying to make Riley’s vision come to life; when I would send things to him and he would laugh then I knew that’s what he wanted (laughs).

Do you find working on a smaller budget production like this that there is more creative freedom or is it all still on a tight schedule?

This is my first feature film that I’ve worked on as a head of the department so I think I’m more into the indie roles because I like the story and the narrative aspect. I like how this is a unique story and a standalone film; Riley was our leader. He set the tone which came from love and trust. By him having that energy it spread and that’s why I think we made the film that we made because of him and his vision. He knows exactly what he wanted and it made is easier for us to do our job.

What was your daily routine on the movie? Was every day something different?

I train every day (laughs); yoga is the minimum. Flexibility is longevity so like something that Bruce Lee would talk about is if you’re flexible like a tree so if the wind blows you’re not going to snap and break and you’ll go with the flow. So I focus on flexibility and strength; I don’t use any weights, it’s all my own body weight. I do it because it makes me feel good, it centers me and it’s just the way of my life. So I do that as well as work; a minimum of stretching and training every day for my own mental fragility I guess you could say (laughs). It’s what makes me happy as well as working with other people as you are giving a part of yourself to them and we’re having fun rather than it feeling like work and I think that’s also what made this project unique and fun.