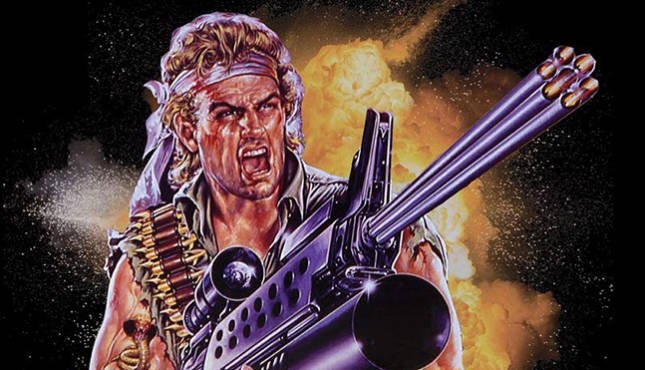 Mine’s Bigger Than Yours: The 100 Wackiest Action Movies (2021) Book Review

Mine’s Bigger Than Yours: The 100 Wackiest Action Movies is hilariously entertaining and a love letter to the genre we adore with both authors clearly knowledgeable about the subject and providing a cheeky sense of humour throughout.

Plot: A celebration of the wildest and weirdest that action cinema has to offer, the hosts of the Really Awful Movies podcast take you on a fun-filled pilgrimage through the nuttiest movies in the genre. Traversing both decades and continents, these 100 titles reach beyond the typical patron saints of action, giving unsung genre heroes like Vic Diaz, Reb Brown, and Godfrey Ho their due. Our intrepid hosts have highlighted action gems with all of the necessary components for greatness: Heroes! Villains! Henchmen! But something’s typically missing. Usually, it’s a budget. Often, it’s talent. But that doesn’t mean these films aren’t as entertaining as any mainstream fare. Divided into nine chapters by subgenre, featuring stills and posters, and with a foreword by genre icon Brian Trenchard-Smith, Mine’s Bigger Than Yours is a romp through the world of fisticuffs, jailbreaks, pit fighting, mercenaries, and really big explosions—all the stuff that makes action movies great.

Review: You know when the cover of your book features Reb Brown from Strike Commando and the title is a line of dialogue from Steven Seagal’s Hard to Kill you’re in for a fun read. The scene in question where the title is mentioned is when the amazingly monikered Mason Storm is facing off against a knife wielding goon in a store where he states “I know what you’re thinking. Mine’s bigger than yours, right? It’s not fair.” He then precedes to lower his shotgun lulling the bad guy into a false sense of security. Within seconds he is twisting the guy’s leg the wrong way like he’s opening a bottle of cheap wine.

Anyway, Mine’s Bigger Than Yours is the kind of lighthearted fare that makes for easy reading that’s sure to leave the most miserable swine (like me) with a smile on their face. Exploring 100 of the wackiest action movies many classics like Bloodsport, Commando and a few Seagal gems are discussed as well as some obscure oddities that many will have never heard of. I know for a fact I hadn’t seen a bunch of them so I’ve got some watching to do…

The reviews are mostly 2 pages long and there are several chapters broken down by genre to make it easy to find; because of the fun tone it’s breezy stuff and just when you think you want to put the book down you have to turn the page and see what magnum opus is talked about next.

It’s perfectly formatted and this may seem like a strange thing to credit but the Contents page at the front tells you which film is in each chapter and what page it’s on so everything is easy to find.

The book is written by Christopher Lombardo and Jeff Kirschner who clearly have knowledge of the genre and great intellects in general because I had to Google several of the words and references they used throughout because I’m not the sharpest tool in the box.

They do lose marks for speaking ill of Stan Bush’s classic Bloodsport song ‘Fight to Survive’ and there were a few typos in the review of Lock Up as well but we all do those from time to time.

Overall, Mine’s Bigger Than Yours: The 100 Wackiest Action Movies is a must-read for action fans, clearly written with love for the genre and even once you’ve finished it you’ll want to pick it up and start again.