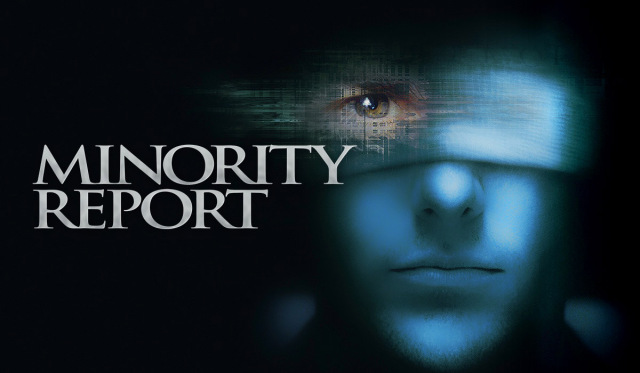 Minority Report is not one of my favourite Spielberg films and I miss the days when he made “fun” movies. It’s a good movie, but I just don’t love it the way everyone else does.

Plot: In a future where a special police unit is able to arrest murderers before they commit their crimes, an officer from that unit is himself accused of a future murder.

Review: I know this is blasphemy but I never really got into this movie; I hate the whole colour drained visuals and I just find it very difficult to like. It’s well made and Tom Cruise gives a great performance and yet I couldn’t take to any of the characters.

It’s so grey and dreary that I rarely find myself wanting to give it a re-watch. I watched it again recently on Blu-ray for the first time and it was really nicely remastered with great visuals and sound, but no matter how many times I watch I just don’t love it.

Peter Stormare’s character is disgusting and I can’t stand the sneezing scene which is just really off-putting and the worst thing about the movie.

There is plenty to like though, like Patrick (The Sandman) Kilpatrick as one of the main cops on the Cruiser’s tale. The effects are pretty decent but the most important thing is how influential this movie is. Look at all the touch screen technology there is today and any time you see an ad on TV, people always say “oh that’s just like Minority Report”.

It’s amazing how quick it changed from science fiction to science fact. Still waiting on the pre-cogs though. I loved that whole concept and the story itself is very entertaining.

Colin Farrell is great as the smarmy git who is trying to get the operation shut down and this was the role that really brought him to the attention of the world.

The action is well done with the stand out scene being the factory fight scene and futuristic car chase.

The music isn’t one of John William’s best scores and it’s rather forgettable, which is frankly a travesty for the greatest film composer of all time. It’s not bad by any means but if you ask me to hum the theme I couldn’t do it.

Overall, Minority Report is not one of my favourite Spielberg films and I miss the days when he made “fun” movies. It’s a good movie, but I just don’t love it the way everyone else does.