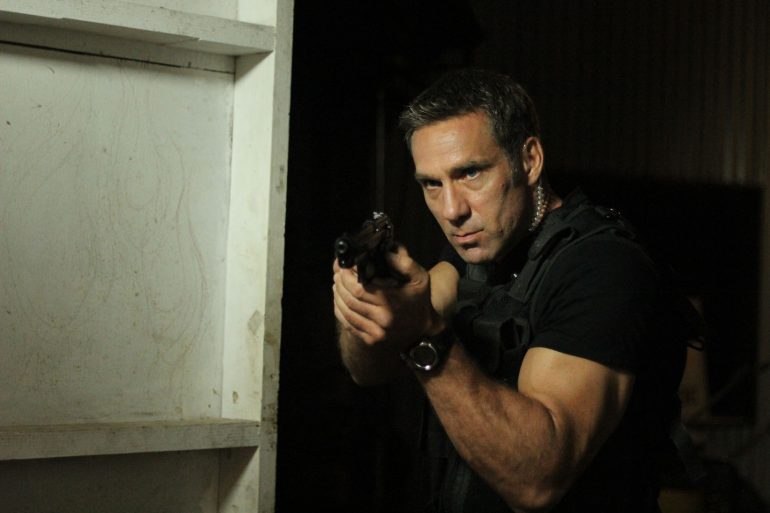 Misfire is an engaging action thriller with a first rate performance from Gary Daniels and there is enough action to please genre fans.

Plot: Hardened DEA agent, Cole, descends into the dangerous underworld of Tijuana, Mexico in search of his journalist ex-wife who he believes has been abducted by a charismatic Cartel boss with aspirations for public office.

Review: Gary Daniels returns in this action thriller from director R. Ellis Frazier (Dead Drop). If you’re looking for lots of fight scenes then you’ll be disappointed; there are a few but this is more of a slow burn character-driven affair.

Daniels is arguably on career best form acting-wise, despite not saying very much. His character of Cole is incredibly intense and does most of his talking with his eyes. There’s a great scene when he’s sitting talking to his brother after he’s been arrested and the way Gary looks at him really stuck with me. He just looked like he’s going to explode with rage and then at the end of the scene compassion takes over and he puts his hand on his brother’s shoulder.

Like I said, Misfire is a little slow to get going in the first half but when the action happens it feels authentic and visceral. Nothing unrealistic happens and there is a genuine sense of threat during the shoot-outs. Bullets fly everywhere and the fact that it is genuinely shot in Baja only adds to the realism.

I love how the locals stand and watch in the background as action scenes are happening. I’m not sure if they were extras or just real people randomly looking but it really made it feel like you were watching a documentary of this story unfolding.

I would have liked to see more of the Cartel boss Raul Montenegro (Luis Gatica) who was great in what few scenes he had.

Vannessa Vasquez is jaw-droppingly gorgeous and incredibly likeable as Gracie; she managed to be tough and sympathetic which isn’t easy to pull off.

The final 20 minutes is where the action really kicks off and Gary has a few awesome hand-to-hand fight scenes, coupled with some well executed shoot-outs.

The poster (see profile picture) paints a very different picture from what the actual film is like; I remember this happened with Frazier’s film Across the Line, where it was made to look like an explosive action movie but was more of a character driven thriller. That’s the case with Misfire too; there are no exploding helicopters and the action is small scale, but that’s not necessarily a bad thing.

Overall, despite a slow start, Misfire is an engaging action thriller with a first rate performance from Gary Daniels and there is enough action to please genre fans.