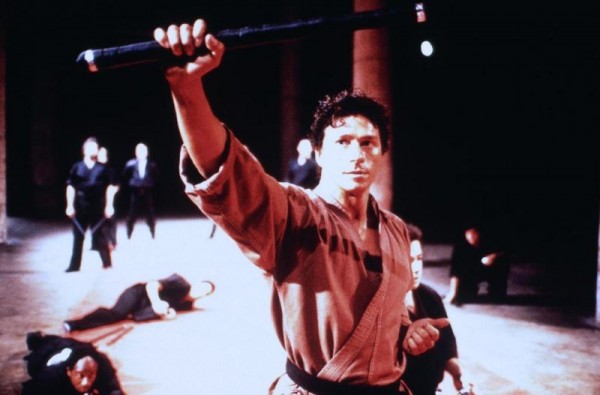 Plot: Kurt Harris (Jeff Wincott), a bitter, ex-cop goes undercover in the “Peacemakers” after his friend is killed by their leader. While there, he discovers that the woman wants to run for mayor, and will do anything to achieve this goal, even murder.

Mission of Justice is the type of action movie I love; straightforward story, plenty of action and great fight scenes. It also has a good cast including Jeff Wincott, Matthias Hues, James Lew and Brigitte Nielsen.

Jeff Wincott always feels like an authentic action star; he looks tough as nails but he also has the moves to back it up. He has a great climactic fight scene with Hues in this movie which is one of the many highlights.

It’s a pretty violent movie too with a pretty shocking scene of a woman getting beaten up which isn’t easy to watch; thankfully the perp gets his ass kicked by Jeff which makes it better.

There are almost too many great fight scenes to pick a favourite but I have to say that Wincott doing The Gauntlet and beating up about 20 guys at once was pretty awesome (which apparently he had to learn very quickly), but also the fight scene in the car garage was pretty cool. Keeps your eyes open in the Gauntlet scene for John Wick director Chad Stahelski…

I love the logic of movies like this; Jeff clearly kills several people in this movie and yet there never seems to be any consequences for blatant murder, why? Good old action movie logic; he’s the hero therefore laws and rules don’t apply.

It’s got some awesome electric guitar flavoured music which always helps and you won’t be bored for a minute either moving along at a fast pace.

Obviously it’s pretty low budget and some of the supporting cast struggle but nothing that detracts from the sheer entertainment value.

Brigitte Nielsen was a surprisingly decent villain; she looks good and has a sexy voice, but was also pretty damn mean too with Matthias Hues playing her henchman which is one of my favourite bad guys of his.

Overall, Mission of Justice remains my favourite Jeff Wincott action movie with some great fight scenes and any movie which has a battle between Matthias Hues and Jeff Wincott is automatically great.