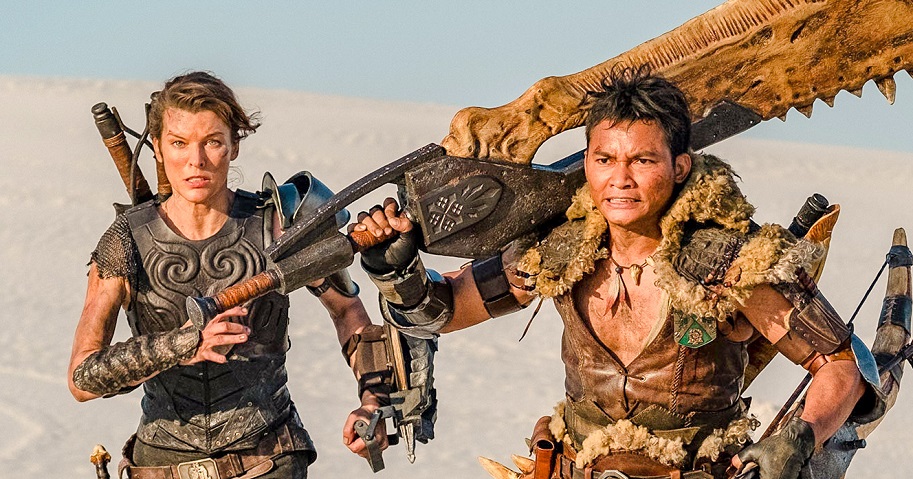 Monster Hunter is hardly classic action cinema with too many overly edited action scenes and a frustrating use of slow motion but it’s well paced and wastes no time getting going. It’s nice to see Tony Jaa in a decent sized role and the visuals are spectacular but by the time it’s over you’ll have forgotten it within minutes. The 4K Blu-ray is worth a purchase if you like the movie as it looks and sounds incredible.

Plot: Behind our world, there is another — a world of dangerous and powerful monsters that rule their domain with deadly ferocity. When Lt. Artemis and her loyal soldiers are transported from our world to the new one, the unflappable lieutenant receives the shock of her life. In a desperate battle for survival against enormous enemies with incredible powers and unstoppable, terrifying attacks, Artemis teams up with a mysterious hunter who has found a way to fight back.

Review: I think I was a little overly harsh on Monster Hunter when I first watched it; I recently picked it up on 4K to give it a revisit and I’d be lying if I said I didn’t enjoy it so I thought I would redo my review.

I’ve never played the videogame Monster Hunter that this movie is based on but I have seen a lot of footage from it so I have an idea what it looks and sounded like.

I was looking forward to seeing this mostly because I love monster movies but it also had Tony Jaa in a major role rather than as a side character. Then I remembered it’s directed by Paul W.S. Anderson who made the Resident Evil movies; admittedly they had their moments so if you liked them then this feels similar in terms of visual style and tone.

Milla Jovovich stars as Artemis, a Ranger who with her squad gets sucked into another world filled with monsters; the rest of the movie involves Artemis trying not to get eaten/killed while also attempting to get back home. Along the way she meets Hunter (Tony Jaa) who apparently really likes chocolate and at first they fight for no reason whatsoever even though he previously tried to save her and her team.

They become allies and work together in trying to get more weapons so they can defeat the “Diablos” and Artemis can get home. The characters are generally one note and not especially memorable but there is a little heart with Hunter keeping little statues as reminders of his deceased family and Artemis holding on to her wedding ring.

It’s constant action and very well paced although I still think the set-pieces are overly edited and there is too much slow motion. The visual effects are undoubtedly impressive, and the monsters look fantastic and straight out of the videogame. Director Paul W.S. Anderson is clearly a fan and did his best in recreating the world of the game for this movie.

Milla Jovovich has long since proven her her ass kicking abilities and she has good chemistry with Tony Jaa.  As I said there wasn’t any reason for Artemis and Hunter to fight but it was an excuse to see Tony Jaa do his thing and it’s one of the highlights of the movie.

Ron Perlman is introduced as The Admiral and he looks the part as the popular game character; several other characters appear towards the end but we never get to spend any time with them so I couldn’t even tell you their names. It’s very much open for a sequel with one of those frustratingly inconclusive endings however, if we got a sequel I would still watch it.

Maybe I was in a bad mood the first time I watched this but on this viewing I loved the score which was atmospheric and although it lacked a tune it worked for the movie.

I’m not really sure what I was expecting as Monster Hunter is pretty much exactly what we were promised from the trailers; it has impressive visuals and in 4K it looks and sounds crystal clear. I guess things like character development and memorable dialogue don’t matter in a movie about big monsters but this still is nothing more than empty spectacle. It’s fine for a Saturday night with enough action to keep you engaged and Milla/Tony make for a fun duo.

The 4K Blu-ray as I said looks and sounds faultless (although too much still takes place at night) and the special features show all the hard work that went into creating the movie.

The deleted scenes are literally just one of the Rangers telling cowboy jokes; they add a nice bit of characterization but they would have killed the pacing so it’s understandable why they ended up getting cut. The Monster Hunters focuses on the cast and their characters and adds a bit of insight if like me you aren’t familiar with the games. I enjoyed the Monstrous Arsenal which showed us the weapons of the movie which are lifted straight out the games. The most entertaining part was them talking about how Tony Jaa was a natural with them. For the Players Game to Screen also gives us a look into bringing the videogame to life and made me appreciate the hard work that goes into making a film a like this more.

Overall, Monster Hunter is your generic blockbuster filled with hollow spectacle, overly edited action scenes and too much slow motion but it’s still a fun and harmless time. It’s good to see Tony Jaa in a high profile role and the visual effects are impressive; it’s never looked or sounded better than on 4K so if you are a fan of the film and have a 4K player then then it’s worth picking up.