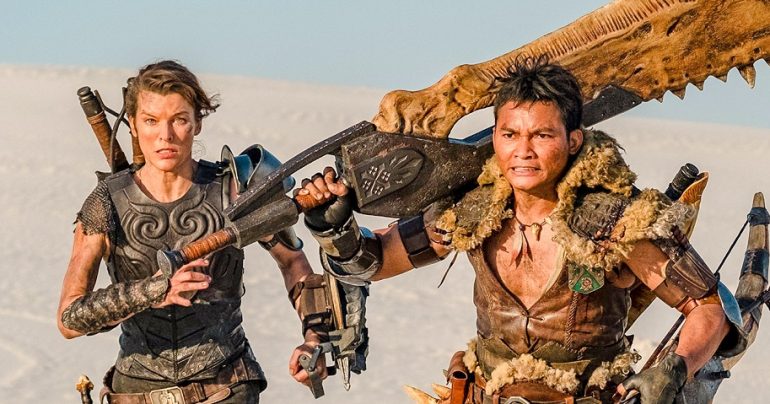 Monster Hunter fails to generate any real thrills or excitement with too many overly edited action scenes and a frustrating use of slow motion. It’s nice to see Tony Jaa in a decent sized role but I just wish it was in a better movie. It’s not without its moments and the visuals are spectacular but by the time it’s over you’ll have forgotten it within minutes.

Plot: Behind our world, there is another — a world of dangerous and powerful monsters that rule their domain with deadly ferocity. When Lt. Artemis and her loyal soldiers are transported from our world to the new one, the unflappable lieutenant receives the shock of her life. In a desperate battle for survival against enormous enemies with incredible powers and unstoppable, terrifying attacks, Artemis teams up with a mysterious hunter who has found a way to fight back.

Review: I’ve never played the videogame Monster Hunter that this movie is based on but I was still looking forward to seeing this mostly because I love monster movies but it also had Tony Jaa in a major role rather than as a side character. Then I remembered it’s directed by Paul W.S. Anderson who made the Resident Evil movies; admittedly they had their moments so if you liked them then this feels similar in terms of visual style and tone.

Milla Jovovich stars as Artemis, a Ranger who with her squad gets sucked into another world filled with monsters; the rest of the movie involves Artemis trying not to get eaten/killed while also attempting to get back home. Along the way she meets Hunter (Tony Jaa) who apparently really likes chocolate and at first they fight for no reason whatsoever even though he tried to save her and her team.

They become allies and work together in trying to get more weapons so they can defeat the “Diablos” and Artemis can get home.

That’s all there is to it and the only hint of heart to the story is Hunter keeping little statues as reminders of his deceased family.

The rest is Paul W.S. Anderson all the way with overly edited action scenes, too much slow motion and a general assault on the senses. The visual effects are undoubtedly impressive, and the monsters look fantastic (even if they do look a bit samey after a while) but it never really engages.

It is at least well paced with Milla doing her usual ass kicking but the real highlight is as I mentioned seeing Jaa in a high-profile role. We rarely get to see Jaa use his signature fighting moves but his sheer easy likability makes him arguably the most appealing character in the entire movie.

Ron Perlman is introduced along with a bunch of other characters whose names I couldn’t even tell you and it’s very much open for a sequel with one of those frustratingly inconclusive endings. This really is just the Resident Evil franchise now with big monsters instead of zombies.

The score is generally tuneless and noisy and not one I would listen to outside of the movie but it works for the onscreen carnage.

I’m not really sure what I was expecting as Monster Hunter is pretty much exactly what we were promised from the trailers; I guess things like character development and memorable dialogue don’t matter in a movie about big monsters but I would have liked to have at least felt something.

Overall, Monster Hunter is your generic blockbuster filled with hollow spectacle, overly edited action scenes and too much slow motion. It’s good to see Tony Jaa in a high profile role and the visual effects are impressive but by the time it reaches the end credits you’ll feel nothing.