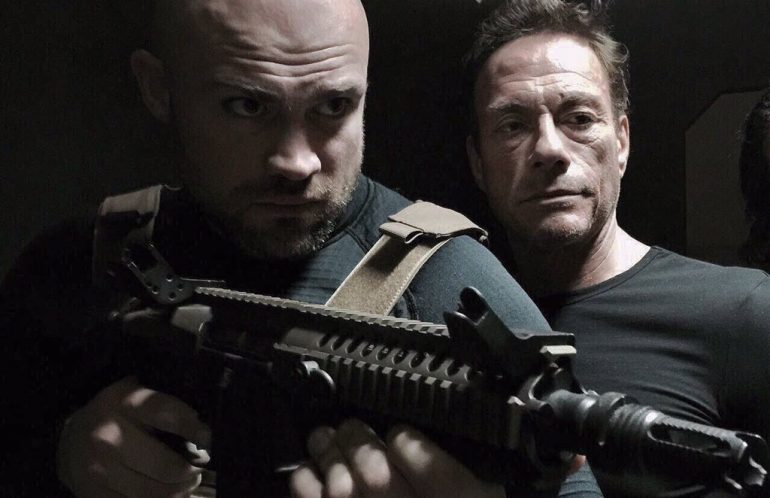 Most Anticipated Actioners of 2018

2017 is nearly over so now seems like the perfect time to look ahead at what we can expect from the action genre in 2018. It looks like we’ll not see The Expendables 4 any time soon which is a shame but there are plenty of other movies coming out which should keep our blood lust at bay.

JCVD and Dolph Lundgren star in this actioner about a deep cover operative who awakens to find himself imprisoned in a CIA Blacksite on board a retrofitted nuclear submarine. Enlisting the help of a rookie agent and another prisoner, he must race against the clock to escape and discover who set him up.

Scott Adkins looks like he’s going to have a good year in 2018 with several awesome looking movies; Accident Man is a dream project for him where he plays Mike Fallon, the Accident Man, a stone cold killer, whose methodical hits, baffle the police and delight his clients, he is the best at what he does. But when a loved one is dragged into the London underworld and murdered by his own crew, Fallon is forced to rip apart the life he knew in order to hold those accountable and avenge the one person who actually meant something to him.

I’m not 100% sure this will make it out in 2018 but I believe filming is currently underway with Scott Adkins and Johnny Strong set to star. The story centers on a New Orleans police detective (Strong) who sets off for Russia in search of the syndicate enforcer who killed his partner. With the help of an old war buddy (Adkins) and the enforcer’s own kidnapped lover, they pave a path of bloody retribution throughout the mean streets of Moscow.

Triple Threat may well be my most anticipated movie for next year. The plot centers on a down-and-out band of mercenaries (Tony Jaa, Tiger Chen) who take on a trio of assassins (Michael Jai White, Scott Adkins, Michael Bisping) who are hired to take out a billionaire’s daughter intent on bringing down a major crime syndicate. The action looks great and could be what The Expendables series should have been… we shall see …

Scott Adkins and Louis Mandylor star in Jesse Johnson’s The Pay Up about two debt collectors who are very, very dark and brilliant who are forced midway through the film to have a complete reevaluation and change their act.

We don’t know any details on the plot yet but Denzel is set to return in this sequel to the well received first movie, so I’m looking forward to it immensely.

Dwayne Johnson stars as FBI Hostage Rescue Team leader and U.S. war veteran Will Ford, who now assesses security for skyscrapers. On assignment in China he finds the tallest, safest building in the world suddenly ablaze, and he’s been framed for it. A wanted man on the run, Will must find those responsible, clear his name and somehow rescue his family who is trapped inside the building… above the fire line.

This was meant to be out this year but was moved to next March; it obviously won’t be a patch on the Bronson classic but it also might not be the clusterfuck we first expected. Maybe Bruce Willis might show some personality again…

Dr. Paul Kersey (Bruce Willis) is a surgeon who only sees the aftermath of Chicago violence as it’s rushed into his ER – until his wife (Elisabeth Shue) and college-age daughter (Camila Morrone) are viciously attacked in their suburban home. With the police overloaded with crimes, Paul, burning for revenge, hunts for his family’s assailants to deliver justice. As the anonymous slayings of criminals grabs the media’s attention, the city wonders if this deadly avenger is a guardian angel…or a grim reaper.

I’m not sure how to feel about this movie yet but I’m keeping an open mind as I remain a big fan of Shane Black and it also stars Thomas Jane and Jake Busey which sells it for me.

Early word hasn’t been positive for the next entry in the Kickboxer series but we’ll find out in a few weeks.

It takes place one year after the events of “Kickboxer: Vengeance”, where Kurt Sloan has vowed never to return to Thailand. However, while gearing up for a MMA title shot, he finds himself sedated and forced back into Thailand, this time in prison. He is there because the ones responsible want him to face a 6’8″ 400 lbs. beast named Mongkut and in return for the fight, Kurt will get two million dollars and his freedom back. Kurt at first refuses, in which a bounty is placed on his head as a way to force him to face Mongkut. Kurt soon learns he will have no other choice and will undergo his most rigorous training yet under some unexpected mentors in order to face Mongkut in hopes to regain his freedom.

Gerard Butler stars in this gritty crime saga which follows the lives of an elite unit of the LA County Sheriff’s Dept. and the state’s most successful bank robbery crew as the outlaws plan a seemingly impossible heist on the Federal Reserve Bank.

I adore the “Has Fallen” series and Gerard Butler has proven himself a modern action hero; I’m not sure we’ll actually see this in 2018 as filming was delayed for 3 months after Butler injured himself in a motorcycle accident but hopefully we do and it has a bodycount in the hundreds.

The fist trailer was released the other day and it was pretty underwhelming but the movie will involve people running from dinosaurs and being eaten so I’m in.

It’s been four years since theme park and luxury resort Jurassic World was destroyed by dinosaurs out of containment. Isla Nublar now sits abandoned by humans while the surviving dinosaurs fend for themselves in the jungles. When the island’s dormant volcano begins roaring to life, Owen (Chris Pratt) and Claire (Bryce Dallas Howard) mount a campaign to rescue the remaining dinosaurs from this extinction-level event. Owen is driven to find Blue, his lead raptor who’s still missing in the wild, and Claire has grown a respect for these creatures she now makes her mission. Arriving on the unstable island as lava begins raining down, their expedition uncovers a conspiracy that could return our entire planet to a perilous order not seen since prehistoric times.

I think the biggest thing people will remember about this movie is Henry Cavill’s mustache and how it even caused re-shoots for Justice League but the Mission: Impossible series has been strong so far; we can expect Tom Cruise punching the moon in the face or some other extraordinary stunts too. No word on plot details yet but we’ll likely hear something soon.

Donnie Yen is set to star in this MMA-themed actioner directed by Kam Kar-wai. Once again there are no plot details but the movie features MMA fighters, stuntmen and more. Expect bones to be broken.

The first movie may have had its flaws but I will never grow tired of large robots punching larger monsters in the face so count me in. John Boyega stars as Jake Pentecost, son of Stacker Pentecost, who reunites with Mako Mori to lead a new generation of Jaeger pilots, including rival Lambert and 15-year-old hacker Amara, against a new Kaiju threat.

This upcoming Ip Man spin-off stars Jin Zhang, Dave Bautista, Michelle Yeoh and Tony Jaa. Jin Zhang was one of the best elements of Ip Man 3 so I’m excited to see what he brings as the lead in this anticipated movie.

Liam Neeson is back in Taken 12; actually this looks interesting but lets hope they fix that shitty CG we saw in one of the earlier trailers. Neeson plays a businessman who is caught up in a criminal conspiracy during his daily commute home.

Jason Statham stars (for some reason) in this movie with him facing off against a giant killer shark. He’d better call it a “cahnt” or I’ll want my money back.

A deep-sea submersible is attacked by a massive creature, previously thought to be extinct, and now lies disabled at the bottom of the deepest trench in the Pacific with its crew trapped inside. With time running out, expert deep-sea rescue diver Jonas Taylor is recruited by a visionary Chinese oceanographer to save the crew from this prehistoric threat.

I always enjoyed the videogames and Lara Croft is a great character so let’s hope they get the movie right this time. Alicia Vikander plays Lara Croft, the fiercely independent daughter of a missing adventurer, who must push herself beyond her limits when she finds herself on the island where her father disappeared.

Sylvester Stallone returns as Ray Breslin, a man who can break out of any prison so it looks like he’ll be doing much the same in this second entry of the impending trilogy. It will also co-star Dave Bautista.

Probably my least anticipated Star Wars movie ever but I know I’ll be there to see how good/bad it ends up being.

Other movies out in 2018 which I don’t really care about are Rampage, Alita, Battle Angel, Maze Runner: The Death Cure and probably a few under the radar movies we don’t even know about yet.