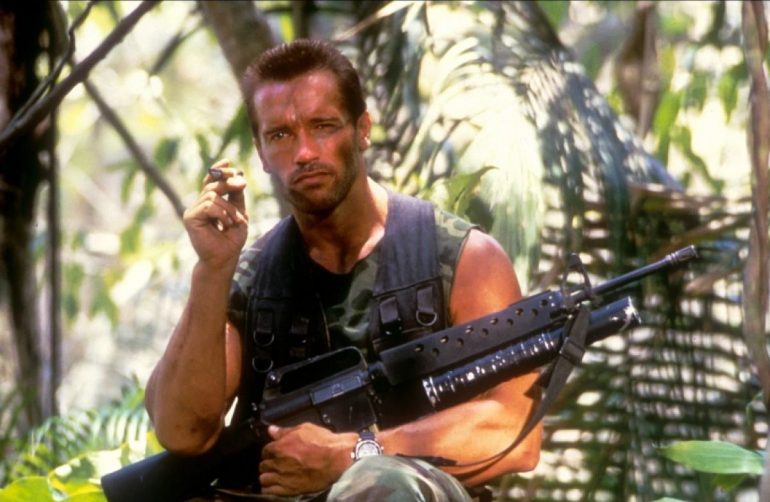 Most Quotable Action Movie of All Time?

I think we can all agree that the original Predator from 1987 starring Arnold Schwarzenegger in his absolute prime is one of the all-time great action movies. It doesn’t just have Arnie though; we’ve got Bill Duke, Carl Weathers, Shane Black, Sonny Landham and Jesse Ventura all at the top of their game and every member of the cast get their moment to shine due to having one of the greatest scripts in action movie history.

After watching it recently it got me thinking that surely it has to be the most quotable action flick of all time. The only other movie that could possibly come close is Die Hard but where Die Hard has John McClane spout the majority of zingers, in Predator it’s a group effort and there are almost too many one liners to mention… but let’s give it a try.

First of all Dutch played by Arnold Schwarzenegger has some of the most iconic lines with the likes of:

”Get to the Choppa!”

“What’s the matter? The CIA got you pushing too many pencils?”

“My men are not expendable. And I don’t do this kind of work”

“So you cooked up a story and dropped the six of us in a meatgrinder?”

“What the hell are you?”

“What is this fucking tie business?”

But his best moment?

Those are just some of Dutch’s finest lines but like I said this isn’t just his show.

The great Carl Weathers plays Dillon; an old comrade of Dutch’s who may be hiding something from the rest of the team. Although his dialogue isn’t quite as good as Dutch and co. he still has a few choice lines.

“So, what are you gonna try next? Cheese?”

“Never knew how much I missed this, Dutch.”

“You saying that Blain and Hawkins were killed by a fucking lizard? That’s a bullshit psyche job. There’s two to three men out there at the most. Fucking lizard”.

Shane Black (Director of Iron Man 3 and The Nice Guys) plays Hawkins who spends most of the movie trying to make Billy (Landham) laugh.

Hawkins: See, she, she wanted a little one ’cause hers was…

[Hawkins pauses, then trails off]

Then his other beauty was:

Hawkins: See, cuz of the echo”.

Then of course the great Mac played by Bill Duke who has a knack for being scary even when he’s playing a good guy.

“You’re ghostin’ us, motherfucker. I don’t care who you are back in the world, you give away our position one more time, I’ll bleed ya, real quiet. Leave ya here. Got that?”

“Gonna cut your name right into him”

Sonny Landham plays Billy who early on realizes this threat is something more than human.

“There’s something out there waiting for us, and it ain’t no man. We’re all gonna die.”

“The only way outta here is that valley that leads to the east. But I wouldn’t risk that on a broke-dick dog.”

Jesse Ventura has some of the best lines in the movie as Blain including the iconic “I ain’t got time to bleed”.

A line which you would never hear in today’s cinema would certainly be “Bunch of slack-jawed faggots around here. This stuff will make you a goddamned sexual Tyrannosaurus, just like me!”

“Son of a bitch is dug in like an Alabama tick.”

“This shit’s something. It makes Cambodia look like Kansas.”

See what I mean? That is one quotable movie which is why it has stood the test of time; here’s hoping Shane Black can conjure up the same magic for The Predator in 2018.