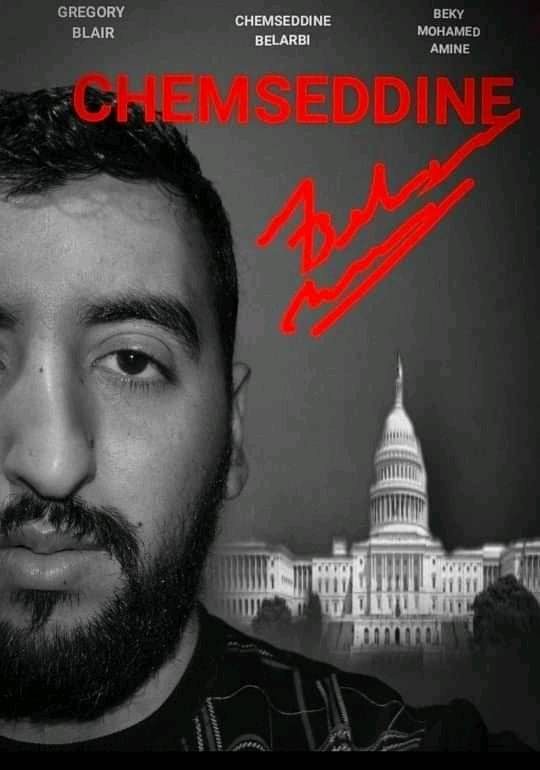 A film produced by Hollywood in partnership with the Algerian Film Production Company. The film tells a true story about the international artist CHEMSEDDINE Belarbi. This artist, who is considered the last artist in Africa, is still designing posters for Hollywood and international films in the traditional way. Some shots are filmed in the American White House.

The film passes a message to the world about who the Arab youth is Art Muslim CHEMSEDDINE Belarbi says about his story:

“My name Chemsou Belarbi. Date of birth 14 February 1987 in the municipality of Ain Tadlas of Mostaganem; I live in a family of six people. I am the oldest child in the family. My father works hard work despite his old age and he gets tired a lot for a living. My brother is very sick because he was doing hard work which affected his health, so a disability in walking occurred. Actually, this affected me a lot.

When I was younger, I used to enter the movie theater; I liked the huge posters hanging on the doors of the cinema. When I came back home I drew some of the scenes I saw in the movies. Some of the movie posters that remained in my memory are  TITANIC – MORA but the problem was that I was living in poverty. I did not even have the money to buy food for our family. In childhood, I used to work hard to collect money in order to buy tickets to the cinema hall. Sometimes I used to work hard and then the business manager did not give me money for my work … I suffered a lot in my childhood but my love for cinema and movies made me continue working to reach my goal.

After I decided to build a small workshop in the middle of our house, I started to draw film posters and paint movie stars. I did not have the money to buy drawing tools and began to produce the colors of the leaves of trees and flowers so that the flowers dried red and yellow and extracted a good color for painting. The drawing feather was made from the clothes thrown into the trash.

I started sending messages to American film production companies. I did not receive any answers so I went through very difficult times. I continued heavy work such as carrying stones and working on escalators, and this affected my health and focus. I was exploited by people who did not give me a wage for my work. I was abused a lot in my childhood. My health began to be affected greatly so I entered the hospital for over two months due to a stomach disease. When I left the hospital I started drawing pictures and exhibiting in the streets and I used to decorate the shops. In 2014, an actor named Juan Manuel Olmedo called me. He asked me to create a poster for his movie and participate in this film. The famous Hollywood actor ( KEVIN D. BENTON). This work was successful then the requests started coming from the directors and producers – Then, it is a delegation of conduct by the comedian and former boxing MAÎTRE MAHLA of Belgium in Oran to meet me. They organized a special ceremony in honor of me then part of my dream came true, as I painted and designed many international film posters.

I am drawing so that the whole world will unite under the flag of peace and I was presenting drawings to children who fled from war zones in their countries and came to Algeria and they loved me, because I love peace for the whole world. I love to draw and present memories to characters from all over the world.