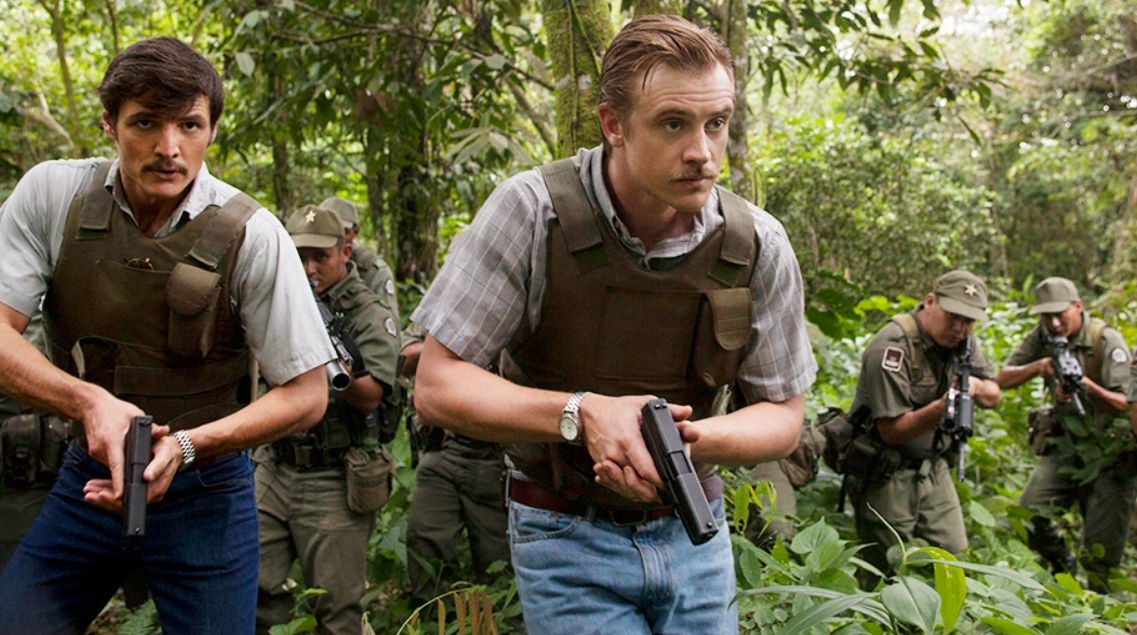 Narcos is one of the best shows on Netflix with faultless performances from the entire cast, near constant tension and of course plenty of shoot-outs and violence for all us action fans.

Plot: A chronicled look at the criminal exploits of Colombian drug lord Pablo Escobar, as well as the many other drug kingpins who plagued the country through the years.

Review: I finally caught up with the Netflix series Narcos recently and finished all three seasons; inspired by the true events in the takedown of the legendary drug kingpin Pablo Escobar and the Cali Cartel, Narcos is a fascinating dive into this dangerous world and it’s hard not to have a very grudging respect for Escobar for the sheer balls of what he would do. He was no doubt an absolute monster but there’s a reason we all still know who he is today.

The series uses real footage of some of the events that transpired during that period showing his dramatic rise as one of the most powerful men in Colombia. Paying off police, locals and politicians leading to eventual terrorism Escobar was untouchable but that didn’t stop the DEA and Colombian government from trying everything in their power to take him down. Some of it you would think is farfetched if it didn’t actually happen which is what keeps you glued as the viewer.

The main cast includes Pedro Pascal as DEA Agent Pena and Boyd Holbrook as Steve Murphy who partner up and attempt all kinds of schemes in order to finally bring down Escobar and his drug empire. This series is completely owned by Wagner Moura who brings Pablo Escobar to life portraying him as a vicious criminal but also a human being who would do anything for his family.

Agent Javier Peña is an interesting character who becomes obsessed with bringing Escobar to justice but by the second season he begins to use questionable tactics including working with Los Pepes who are killing Escobar’s men in public and destroying his empire while he goes into hiding. Javier Peña was involved in the takedown of Pablo Escobar in real life but contrary to what season 3 of this series says he wasn’t involved in the Cali cartel investigation. That explains why there is less real life footage of them than in previous seasons.

Steve Murphy is every bit as obsessed with taking down Escobar as Peña and it even starts to affect his marriage with his wife who goes back to the Sates to escape the madness.

There is the odd episode (especially in the second season) that are a little ponderous but generally Narcos is well paced and we get regular shoot-outs, explosions and brutal killings. It packs a lot in so not only do we get good characterization, but an engaging plot featuring corruption, conspiracies and of course buckets of bloodshed.

You could argue that it is less interesting when Escobar eventually meets his fate by the end of season 2 and the Cali cartel just aren’t as fascinating but I still thought Season 3 was incredibly tense especially every scene involving Jorge Salcedo (Matias Varela) who just wants to run his own security business but he can’t sever ties with the Cali cartel. The most terrifying individual in the entire series is David Rodriguez who has it in for Salcedo and comes from the Joe Pesci school of absolute loons.

Arturo Castro certainly did a good job as his portrayal literally gave me nightmares as there was something about him that was just terrifying. Although this is based on real life I personally felt David’s comeuppance in the show wasn’t nearly satisfying enough and felt a little rushed.

I’m not going to go into any more detail as there are so many characters and story arcs to go through here but if you enjoy your crime stories with lots of violence and scary people doing terrible things then Narcos will be right up your street.

Overall, Narcos is one of the best shows Netflix has done (that I’ve seen) and it’s now got me interested in checking out Narcos: Mexico which I feel I need to see to get a complete picture. Narcos isn’t short on action with regular shoot-outs and a constant feeling of impending violence and threat that should keep you on the edge of your seat.