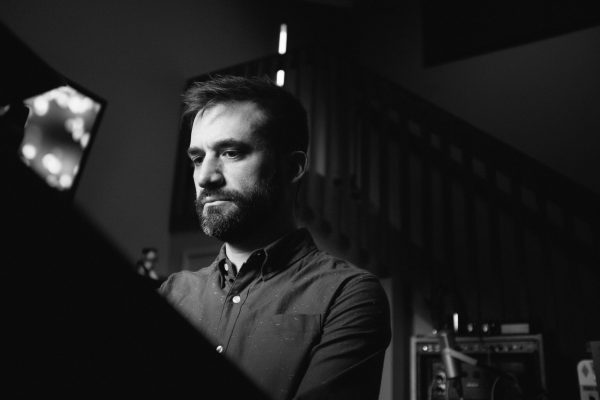 Composer Nathan Whitehead is best known for the scores for the blockbuster film franchise “The Purge.” Recently he completed scoring the feature films “Keanu,” “The Purge: Election Year,” and Beyond Skyline.

Nathan chats with The Action Elite about working on Beyond Skyline.

How did you first get involved with Beyond Skyline?

I scored a movie called By the Gun that Matthew Chausse produced and he’s also a producer on Beyond Skyline so that’s how it started. Matthew and I had just worked together even though it wasn’t as director/composer and so I just reached out and said “Hey Matthew, I would love to talk about this movie” and so that led to a meeting with (director) Liam and I feel like we really hit it off. He said “let’s do this” and we spent 2 years or whatever it was (laughs); this long process of getting Beyond Skyline made. It was just kind of an evolution of relationships that led to meeting Liam.

What was Liam’s vision for the music? Was there a clear of idea of what he was looking for?

Yeah, in some ways he did have some clear ideas; there’s always some exploration into sound and style. A lot of what we would do is listen to and try different music and move it around. I feel that he had a clear vision for the spirit of the movie which doesn’t translate into incredibly specific musical terms but I think it was way better. There’s the combination of an alien invasion, insane martial arts and a story that takes it all over the world but also the excitement and larger than life action all while keeping a sense of fun. So my impression was Liam had a very clear vision of that.

It wasn’t so much that had had to sound like this movie or that score; he really responded consistently and helped guide us on that mix.

It felt like a cross between Independence Day, Die Hard, Predator and The Raid all mixed into one!

You just saying that; that was the substance of so many of our meetings and trying to marry all these ideas together. It was a crazy process but a lot of fun.

Were there any other movies or composers that inspired your musical choices for this movie?

For this movie kind of giant action music and alien invasion things, I should definitely mention Steve Jablonsky. He was definitely a mentor for me; I started out doing assistant work for a handful of composers over the years in the paying the dues days and at one point I was Steve’s assistant which grew into other things. That included working on projects together and he became a very important mentor for me across the board. I think being a part of movies like Transformers 3 and Battleship definitely helped. I had attempted things on this scale before; I was part of a team there obviously and I think that gave me some inspiration and preparation which was very useful. Not that we followed exactly in their footsteps but there was a nod here and there. I think as a composer it’s exciting to work on a lot of different genres but looking at this film it’s this giant Hollywood spectacle that is a lot of fun to watch in a theatre, especially as a kid. Movies like Predator or Terminator were darker but there’s that excitement which just got me to go to the movies as a kid. I love watching movies that are ideal for the big screen. That was all inspiration and I just saw it that we were making a giant action thrill ride so I was channelling all the fun and adventurous experiences I had growing up and going to the movies.

We kind of went in a different direction; Liam was involved in the first movie but I think Beyond Skyline covers a lot more territory certainly geographically but it also combines a bigger variety of characters and different situations in various parts of the world. It felt like a bigger story and that seemed like a good enough reason to go in a different direction. I think it’s interesting that people have said the movie stands alone and I think it does. It’s kind of a simultaneous continuation of the first movie but I didn’t go into it too much though. I kind of followed Liam’s direction where we said let’s try some stuff; no need to particularly follow the language of the first one. I really liked the music to the first one and a friend of mine did the score but we just wanted to make a different movie.

What is usually your process and how does that start off?

My process is basically spending enough time with the movie to feel immersed in the story. I want to get familiar with the world of the movie so I can start experimenting with sounds or tunes. I do this until I get a gut feeling that says “that sounds like Beyond Skyline” or “that weird noise sounds like Beyond Skyline”. So there’s a process at the beginning where I try to form my own ideas and gut reactions that sounds like this world. It might not be the end of what it sounds like but in my experience when I’m able to really sit with it and focus on my own gut feeling (when say Mark is plowing through these creatures with a shotgun or something) and it resonates with me then it most of the time generates a positive response from other people too.

If you don’t have much time of a project it can get really hard to get to that place; if you just have to get that music done ASAP it’s hard to slow down and say “OK, what does this story or character sound like?”

So that’s pretty much how I start out; preferably with as little pressure to produce anything as possible. The more I can free up my mind and say my goal is not to turn in 2 minutes of music today; my goal is to try and understand the story a little bit more so I can spend some time exploring. Through that exploration eventually (so far) things start to sound like the movie.

Do you think music should remain in the background that’s just used to tell the story or do you like bombastic scores that really stand out?

I don’t think every score should be bombastic; we have some bombastic moments in this movie but I think it should be both. I know sometimes people say a good score is one you don’t notice but I think music has a job to do and even more than that. There are a lot of amazing opportunities and I think the central one which is most critical and basic is helping to tell the story, but my favourite scores are ones I enjoy listening to outside of the movie.

My favourite scores do stand alone and they conjure some of the atmosphere, the magic and even the art of the movie. In a sense I don’t want music to be distracting from the movie but it’s very satisfying when things line up nicely and you finish a cue and it feels like it just always belonged in that scene. That’s a great moment when it feels like one thing. I think the best scores don’t blend into the background and go unnoticed. They can be bombastic or really subtle but they should have something compelling and have something that resonates with people even outside of the movie.  I always think of Carter Burwell as he is a favourite composer of mine. I feel like he’s always good at putting music you wouldn’t expect and still not doing it just to call attention to the music but to maybe bring something that we don’t see on screen, bringing a surprising perspective. I prefer this rather than the obvious composing by numbers which can be an obvious shadow of what is happening on-screen is happening with the music.  That’s how I think and what I aspire to; I think the bests scores always do that and have a life of their own.

Any word on when the score for Beyond Skyline will become available?

Yes, we’re working on that and there are still some details to be sorted out the plan is to have it released in time for the US release of the film. It’s not a guarantee at this point but that is the goal.

Beyond Skyline will hit theatres and on Demand on December 15th.