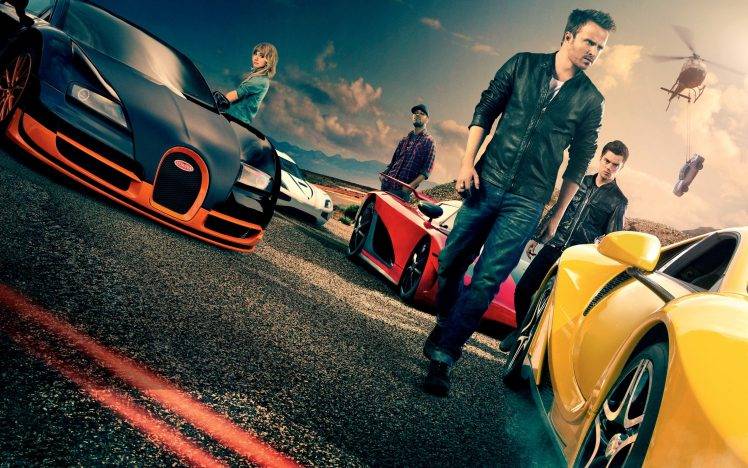 Need for Speed is a fun ride in places but the dragged out length takes away a lot of tension, making it ultimately pretty forgettable. The car chase scenes are very well done and it will appeal to car junkies; if you do buy it I’d pick up the Blu-Ray as it looks fantastic.

Plot: Fresh from prison, a street racer who was framed by a wealthy business associate joins a cross country race with revenge in mind. His ex-partner, learning of the plan, places a massive bounty on his head as the race begins.

Review: Although it is over-long and certainly not a classic film there’s enough vehicular carnage in Need for Speed to get you through a tedious Saturday night.

The car scenes are what elevate the movie above a 2 star rating; director Scott Waugh comes from a stunt background and that much is very clear. The action/racing scenes are quite jaw-dropping in places and it’s beautifully shot; it looks fantastic on Bu-ray too with great surround sound. There are some excellent camera angles and I liked the POV shots from the inside of the car; it gave the video game feeling which made it a little more immersive.

The acting is all fine but the characters just weren’t all that interesting; Imogen Poots was just lovely though and definitely the highlight for me. Dominic Cooper has made a habit of playing despicable bad guys of late and I’m worried that if I ever meet him I might punch him in the face. Great actor though…

Michael Keaton steals the movie and it’s great to see him back in big movies again; he has all the best lines and frankly I’d have watched a movie just about his character.

As everyone has said, Need for Speed is ridiculously long; it opens with a dragged out exposition which you probably could have done in a montage. It lacked tension when any scenes weren’t in the cars and as all the characters never actually felt like real people then it was difficult to get involved in the story.

A movie called Need for Speed should be an adrenaline rush and it simply wasn’t; it could have been first rate and Aaron Paul is a great actor but all he does in this is brood and look moody.

The music was fine but there wasn’t really anything memorable; some cool guitar riffs in places but aside from that are not even any truly great tunes.

I got the feeling it was trying to be a “classier” version of Fast & Furious but it fails because it forgets to actually be fun; it’s surprisingly humourless and any “jokes” just aren’t all that funny. The character of Maverick was quite entertaining but once again, he just didn’t feel natural and the humour fell flat.

Overall, Need for Speed is a fun ride in places but the dragged out length takes away a lot of tension, making it ultimately pretty forgettable. The car chase scenes are very well done and it will appeal to car junkies; if you do buy it I’d pick up the Blu-Ray as it looks fantastic.