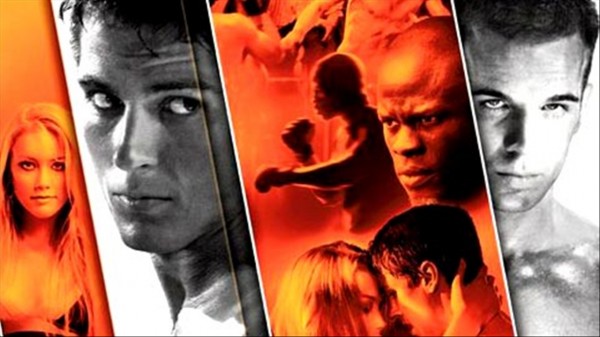 Never Back Down isn’t remotely original and it’s pretty predictable but the characters grabbed me and there are plenty of good fight scenes with a few training montages thrown in for good measure.

Plot: At his new high school, a rebellious teen is lured into an underground fight club, where he finds a mentor in a mixed martial arts veteran.

Review: Sean Faris, Amber Heard and Cam Gigandet star in this formulaic yet hugely entertaining MMA film. Storywise it’s like a million other movies (Karate Kid, etc.) but the reason I enjoyed it, aside from the excellent fight scenes were the characters.

I liked how Jake (Faris) wasn’t the put upon good guy; he actually looks for trouble and is filled with anger…. which we later discover is fuelled by guilt over the death of his father. Being someone who is angry a lot myself, I kinda got where Jake was coming from and it was good how he isn’t just a bland victim character. Faris also looks remarkably like a young Tom Cruise…

For the first half of the movie, you almost want Ryan (Gigandet) to kick his ass until you discover that Ryan is actually a pretty nasty guy, especially when he beats the crap out of Jake’s friend Max.

Max is the typical sidekick character; the guy who thinks he’s cool but is a bit of a dork so when he gets his ass kicked, you know it’s coming.

Amber Heard looks amazing as always but I liked how her character wasn’t one note either. She sets up Jake to fight Ryan at the start and if I were Jake I wouldn’t have forgiven her… ever.

Djimon Hounsou is the Mr. Miyagi type mentor Jean Roqua who helps Jake to control his anger issues and become a better fighter. It’s no wonder Hounsou keeps getting work as he has amazing screen presence and his character is instantly likeable.

The mixed martial arts scenes are well done with fluid camera work and you basically feel every punch. I was surprised at how brutal some of it was considering its PG-13 rating; namely the scene with Max getting beaten up. It’s not like ‘Raze” violent, but considering the rating I thought they got away with a lot.

I liked how after the final fight Jake walks past Ryan and they nod at each other in respect. Believe it or not that actually can happen; I became friends with people I got into fights with in school.

Overall, Never Back Down isn’t remotely original and it’s pretty predictable but the characters grabbed me and there are plenty of good fight scenes with a few training montages thrown in for good measure.