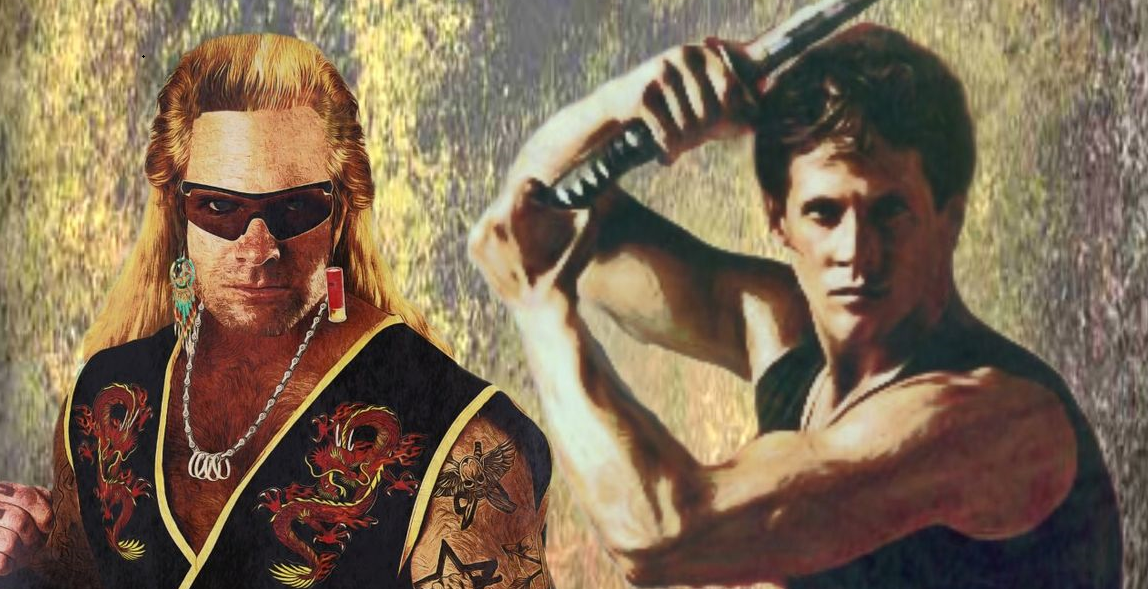 NEVER WORK WITH CHILDREN OR ANIMALS, OR SHANE MOXIE

“Back in the Cannon days, Menahem quite frankly would have had Moxie killed and cashed the insurance check.” Sam Firstenberg, director American Ninja

Prima donna movie stars are nothing new in Hollywood, yet the stories of Shane Moxie’s ‘bad boy’ behavior have become the stuff of legend: from the wild tales of drink and drugs, to the questionable company he keeps (Heidi Fleiss and the Nazi Low-Riders, et al); from his notorious feud with his chimpanzee co-star during the making of ‘caveman cop’ action/comedy Copsicle; to his unprovoked assault on American Ninja actor Michael Dudikoff at The Viper Room.

A troublemaker on set, and a hellraiser off it, a movie director would have to be out of his mind agreeing to work with Moxie… but no one ever accused Sam (Ninja III: The Domination) Firstenberg of being sane. 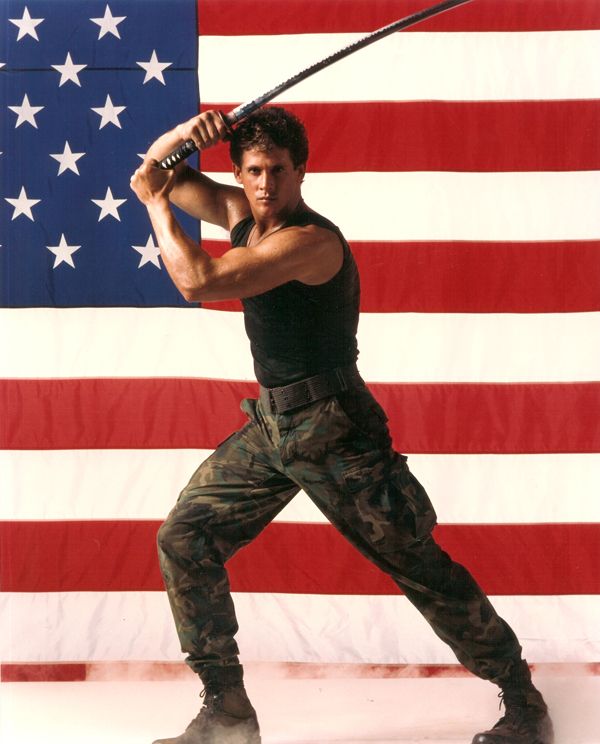 From social justice… to street justice!

SYNOPSIS: A mild-mannered social worker (Moxie, cast against type as the world’s unlikeliest limp-wristed liberal) turns judge, jury, and executioner following the savage murder of his wife, daughter, housekeeper, and dog by a gang of street-punk home invaders.

“The script was a piece of shit, written by a Britisher – Adam Howell? – I don’t believe he ever worked again, and on the evidence of his work on Bleeding Heart, Smoking Gun he certainly didn’t deserve to.

I accepted the directing assignment for two reasons.

Firstly, I was curious to see if the stories I had heard about Moxie were true.

If anything they were understated.

Constantly late, on the rare occasions he deigned to arrive on set, he remained uncooperative and aloof, and distressingly tactile with the female cast and crew (I’m astounded that Moxie wasn’t outed during the #MeToo campaign).  He was also in appalling physical condition, and could barely climb a flight of stairs or even rise from his chair without requiring oxygen, let alone perform his own action scenes.  I only wish we had doubles for his dramatic scenes!  His performance fluctuated from scene to scene depending on how much phencyclidine he had abused that morning.  This accounts for the “uneven” tone that many critics of Bleeding Heart, Smoking Gun have commented on.

Back in the Cannon days, Menahem quite frankly would have had Moxie killed and cashed the insurance check.

Like the rest of the world I was horrified when Moxie hospitalized Michael Dudikoff in an unprovoked sneak assault at The Viper Room nightclub.  Michael is like a son to me, and as I kept vigil by his hospital bed, praying for his recovery, I swore vengeance on Moxie then and there.  But one does not make as many ninja movies as I have without learning a trick or two; I bided my time, waiting for the opportune moment to strike.  On the last day of shooting (for if nothing else, I am a consummate professional and made certain that the film, such as it was, was in the can) on the pretext of rewarding Moxie for his “hard work,” I lured the fool to an abandoned warehouse… where Michael was waiting for him.

As realization dawned, Moxie’s reaction was akin to Joe Pesci’s death scene in Goodfellas.  Now it was The Dude versus The Mox… or snake versus mouse.

What happened next shall remain between Michael and Moxie and I, and our maker.  But let us just say that Michael reclaimed his title as the one and only American Ninja.” 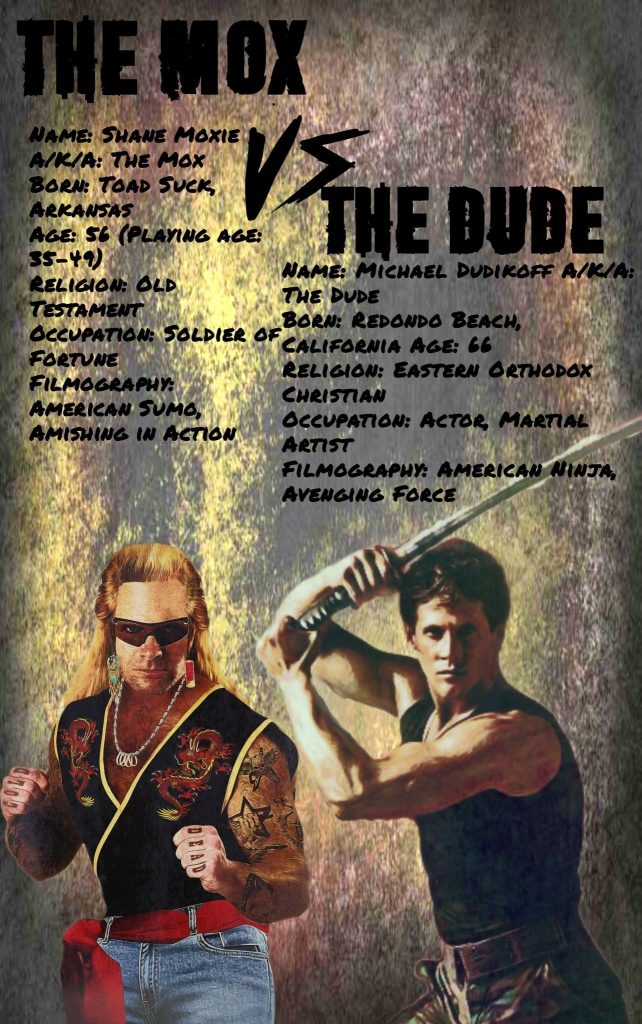 THE DUDE VS. THE MOX

Tale of the Tape

Mr. Firstenberg is not the only filmmaker to butt heads with The Mox.

Here, director Marko Mäkilaakso (It Came From The Desert, War of the Dead) recalls working with Moxie…

One man, Two Feet, Dim Mak in Every Toe

SYNOPSIS: After a bungled black-ops mission leads to the death of his team, US Delta Ranger SEAL John Stryker retires from the service vowing never to handle a firearm again… But when a vicious biker gang (led by Michael Madsen) murders his friend (Keith David), Stryker swears vengeance. Remaining true to his vow, Stryker ventures to the mysterious back alleys of Chinatown, where with the help of a martial arts master (George Takei), and the love of a beautiful woman (Kobe Tai), Stryker undergoes training in the Death Kick, a mythical mawashi geri capable of decapitating a man. And now heads are gonna roll! 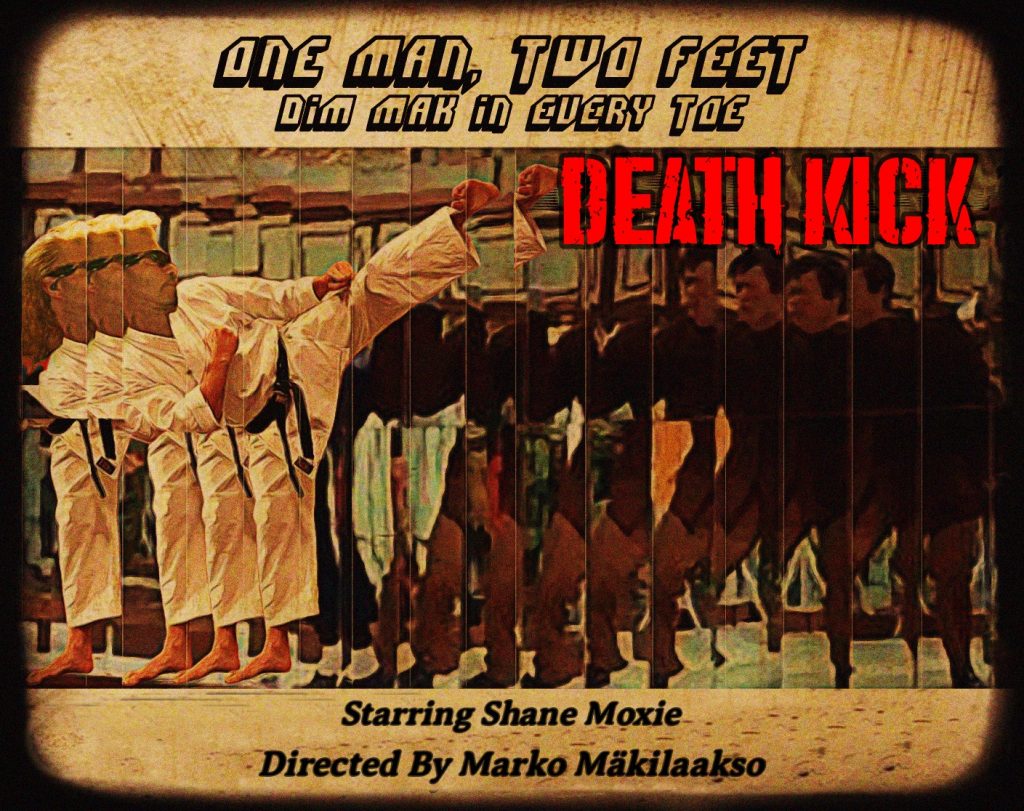 “My fellow Finnish director Renny Harlin, who had worked with Moxie on Lambadass, warned me against working with Shane. I just wish I had taken his advice. But I was a young, hungry director. I believed I could control the Mox.

We had a tight shooting schedule at Bufo Studios in Bulgaria, too tight to deal with any “star” bullshit.  But Moxie arrived late to set – there went two shooting days – and in such poor physical condition that he was barely able to kick above waist level, which was a problem, because his character, Stryker, was supposed to be kicking off people’s heads. We tried lifts in Shane’s shoes, having his co-stars stand in trenches, the usual Tom Cruise tricks. In the end, I was forced to hire dwarf stunt performers, but as anyone who’s worked with dwarfs will tell you, and the Little Person Performers’ Union, they bring their own baggage.

Death Kick was originally written for Jean-Claude Van Damme. I’d worked with JCVD before – a mercurial performer himself, but a dream compared to Moxie – and he visited the producers and I on set one day. It was a much-needed morale boost for what had already become, thanks to Moxie, a strained shoot. But Shane took exception to JCVD stealing the limelight. He was high that day – higher than usual, I mean – and I think he actually believed he was the character of Stryker for real. When he and JCVD got into a heated argument regarding a past cease-and-desist Shane had filed about JCVD’s hair in Hard Target, Moxie attempted to perform the “Death Kick” and stubbed Jean-Claude’s toe.  JCVD reacted with lightning speed, performed one of his famous spinning kicks, and BOOM! We lost three more shooting days of a twenty-day shoot while Shane recovered in a hospital in Sofia. That’s why Shane’s face appears swollen in certain scenes of Death Kick – JCVD left him with a jaw like Robert Z’Dar.

Moxie can also be a prankster – some say a bully – but when someone returns in kind, things can get ugly. One night after shooting, Michael Madsen – who Moxie knew better than to fuck with – arranged a screening of Copsicle for the cast and crew. When Shane arrived, not knowing what he was walking into, and found everyone wearing chimpanzee costumes, he went crazy – I mean, batshit crazy – throwing chairs and punching holes in the movie screen; he even did a protest shit in the theater! Michael got a real kick out of it, but Moxie’s reaction was so extreme that the producers and I finally realized he had been providing phony urine samples for his mandatory drug tests, that he was still actively using phencyclidine. That’s angel dust. Have you ever seen what that stuff does to kids?

By the mercy of God, we somehow survived the shoot, though I think the experience of working with Moxie must have aged me ten years! Would I work with The Mox again? Not a snowball’s chance in hell. Is the guy even still alive?”