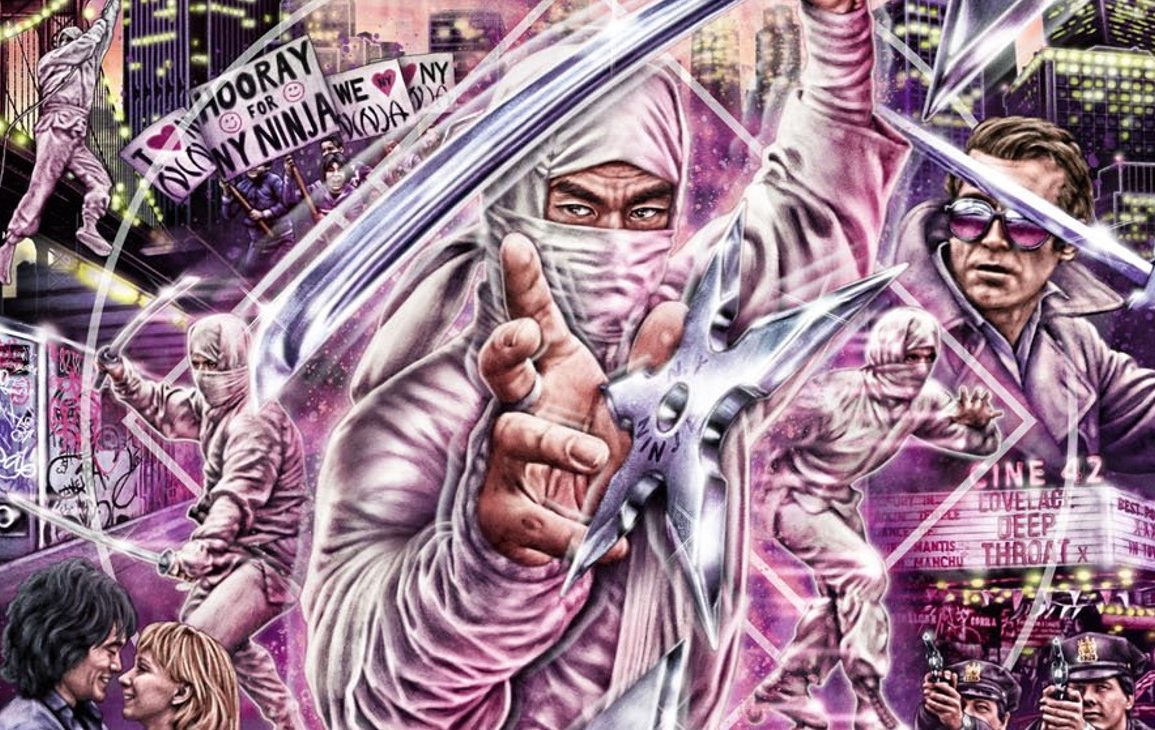 Plot: John is just an average man working as a sound technician for a New York City news station, until one day his pregnant wife is brutally murdered while witnessing the kidnapping of a young woman in broad daylight. Turning to the police for help, John soon learns that the city is overrun with crime and the police are too busy to help. Dressing as a white ninja, John takes to the streets as a sword wielding vigilante hell bent on cleaning up the streets of the city he once loved by ridding it of muggers, pickpockets, rapists, and gang members. However, in John’s quest for justice, he soon finds himself the target of every criminal in the city, including a mysterious villain known only as the Plutonium Killer. Will John survive to become the hero that New York City so desperately needs?

I never knew how badly I needed to see a ninja on rollerblades until today but here we are after I just watched the soon-to-be-cult classic New York Ninja.

Released by Vinegar Syndrome (who are really killing lately with their old-school action Blu-rays) New York Ninja was originally written, directed by and starred John Liu but the film was never completed as Liu retired from the business. Vinegar Syndrome found the supposedly lost film and decided now the world was finally ready for this trashterpiece to be unleashed upon the world.

The original sound was lost so filmmaker Kurtis Spieler got some new blood involved including Don “The Dragon” Wilson to voice Liu and Cynthia Rothrock to voice Det. Janet Flores; we also get horror legend Michael Berryman lending his vocal talents to the main villain The Plutonium Killer and Linnea Quigley as Randi Rydell.

This was never meant to be taken seriously and after being reedited with the new sound New York Ninja has its tongue planted firmly in its cheek and will have you smiling throughout. It still manages to capture that grittiness of New York in the 80’s when it was one of the most dangerous places in America but there’s nothing disturbing in it as it’s mostly played for laughs.

It has an awesome 80s score courtesy of Voyag3r and the end credits theme is still going through my head.

There are plentiful ridiculous fight scenes and even if they are mostly bloodless they are a load of fun; John Liu could certainly move so he looked the part even in his white ninja costume in the middle of New York City…

There are some continuity errors which just adds to the entertainment value; one scene for instance has our heroic ninja on rollerblades then in the next shot they are gone, then back on again. But let’s just sit and think about what I just said here… there was a ninja on rollerblades – I think we should just cancel the Oscars as we already have our Best Picture right here.

I love how there is never really an explanation as to why The Plutonium Killer makes all these weird sounds and he overacts wonderfully. Liu also doesn’t shy away at various points screaming “WHY?” after his pregnant lady is murdered but it’s all deliberate feeling like a parody of movies like Death Wish.

Keep your eyes open for a poster for Ninja III: The Domination in the background in one scene; man I miss the 80’s…

Overall, New York Ninja is not a good movie any stretch of the imagination but it sure is entertaining and will leave you with a smile on your face by the time the end credits roll. It did promise us L.A. Ninja which sadly never materialized, and I feel like this is a tragic loss to cinema.