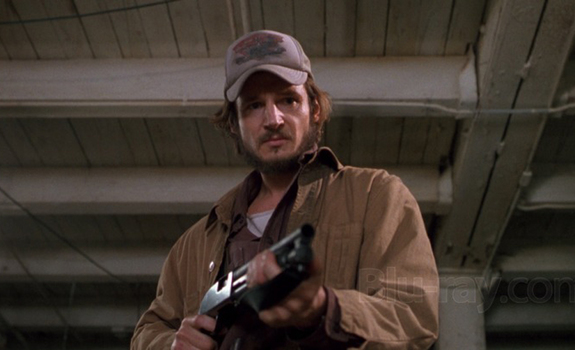 Next of Kin may not be cheesy fun like Roadhouse but it has an excellent cast, intriguing story and an action-packed finale to be worth checking out.

Review: Next of Kin doesn’t get talked about in the same way as Patrick Swayze’s other action movies Roadhouse or Point Break, which is a shame as it’s hugely entertaining and has a pretty incredible cast too. Not only do we have the late great Swayze but he is joined by Liam Neeson, Bill Paxton, Adam Baldwin and Ben Stiller.

Sadly the weakest link is actually Liam Neeson whose accent is all over the place; he really can’t hide it and doesn’t even sound American. It’s not that he’s bad in the movie though as his character Briar is suitably badass and a nice precursor to the roles he’d be known for in later years.

The movie is a little slow in parts and takes a while to get going but I really enjoyed the family dynamic where Briar’s relationship with his brother Truman (Swayze) is on shaky ground. Briar thinks Truman let the family down by leaving the mountains for the city life in Chicago. The two brothers are forced to face their demons when their other brother Gerald (Paxton) is murdered by vicious gangster Joey Rosselini (Baldwin).

The interesting thing about Next of Kin is that it still stands up really well; it was released in 1989 and surprisingly hasn’t dated. It isn’t cheesy and the serious tone exploring family relationships is timeless.

Adam Baldwin is suitably nasty as the villain and it’s a revelation to see a very young Ben Stiller as an up and coming gangster. He should try more of these roles rather than sticking to comedy so much as I always thought he would play a decent bad guy.

The climactic shoot-out in the cemetery is definitely the action highlight with Truman’s redneck family taking on the evil city folk using bows and arrows, guns and more.

The acting in general (aside from Neeson’s wonky accent) is first rate and the script manages to avoid becoming melodramatic. The story is unpredictable with fleshed out characters making this more than your average action movie.

The music wasn’t all that memorable but did the job in creating the right atmosphere for the story.

Overall, Next of Kin may not be lighthearted fun like Roadhouse but it has an excellent cast, intriguing story and an action-packed finale to be worth checking out. It’s a little slow in parts and Liam Neeson’s accent is rotten but it’s entertaining stuff with a satisfying conclusion.