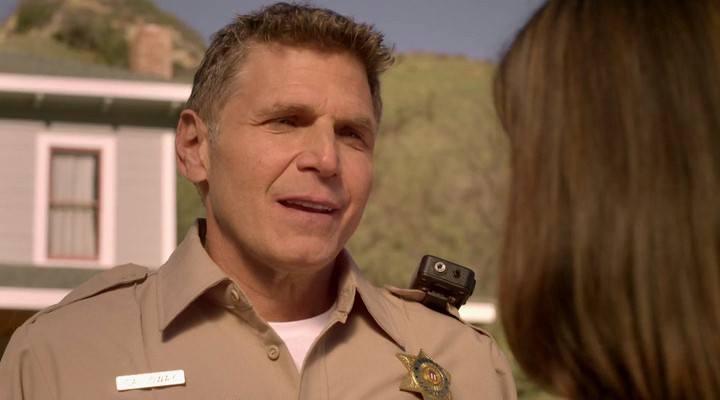 Nick Chinlund has starred in some classic action movies including Con Air, Tears of the Sun, The Chronicles of Riddick, Eraser and many more.

He has also starred in countless TV shows like The X-Files, NCIS: LA, Criminal Minds and Castle.

His most recent role has him starring as the Sheriff in Isaac Florentine’s Close Range which stars Scott Adkins.

Nick stops by to chat with Eoin and Alex about the movie as well as previous roles including Billy Bedlam in Con Air and working on Tears of the Sun.

ALEX: Your character (The Sheriff) in Close Range wasn’t your typical bad guy; he was a man forced into the situation to protect his family. Is that what appealed about the role? I liked how there were grey areas to him…

NICK: Yeah, it’ always more interesting to play a character who is forced to do things he wouldn’t ordinarily do because of love for his family or something strong like that. So yeah there was definitely something interesting in that for sure.

NICK: I haven’t actually seen the finished film yet so I don’t know anything about it. Is out yet or is it about to come out?

EOIN: Yes it came out on December 4th.

NICK: I vaguely remember some references to Stallone and First Blood but to be honest, I’m not sure.

EOIN: How would you describe working with Isaac Florentine?

NICK: He’s awesome, he really is and I’m not just saying that. He has great energy and he really listens to everybody around him then he makes really strong decisions. So he combines being a strong collaborator with being a very strong Captain of the ship. That was a lot of fun to have that firm hand but also that open mind. I completely got him and was on the same page with him and I had a lot of fun working with him.

EOIN: Would you say he encourages improvising on the set and is open for suggestions at the spur of the moment?

NICK: Yeah, not encouraged but he was very open to any improvements or suggestions and if any changes were made then he would be very happy with them.

ALEX: For a great deal of your career you have been cast as the bad guy. Do you find that type of role to be more fun and nuanced than playing the good guy?

NICK: It goes role by role. Complexity, shades and levels are the most interesting things to me so whether those sorts of roles come from playing a good guy or a bad guy doesn’t really matter. Rarely does a bad guy think he’s a bad guy; usually he thinks he’s doing good. (laughs) “I’m freeing so and so from the torture of this Earth” or “I have to do this” as in this movie Close Range. I mean I thought Adkins’ character was a bad guy and a little shady whereas I was also trying to save my family so I wouldn’t say that I’m a bad guy.

ALEX: Are there any roles that you have yet to do that would really appeal to you?

NICK: I would like to do more complex characters that are more fleshed out and deep that have a lot of multiple layers. So I would love to get a chance to play some more of those. As far as labels go I’ve done cowboys, Navy SEALs, corporate raiders, submarine guys… so I’ve played many different types of roles. It’s more who you would want to work with so that’s more what I’m looking for. I’d love to work with Martin Scorsese or Ridley Scott. It would be cool to do that.

EOIN: Of all the characters you’ve played was there one who you identified the most with in terms of your own personality?

NICK: No, not really; I’m a totally different guy from who I was 20 or 40 years ago but there are big chunks of me in every part I play. I may a serial killer and I may even identify with that character a lot; not that he’s a serial killer but he’s really pissed off and insecure that he’s misunderstood and he’s fighting for a connection. That is maybe what I would relate to so if I say that I relate to that character then people would jump to the conclusion that I’m connecting to the serial killer part (laughs). But that’s not what you’re playing; you’re playing those deeper elements that are fueling his actions.

EOIN: When playing a character like Billy Bedlam in Con Air, was there any research you did to base him on anyone from real life?

NICK: No, it’s the elements that makes them human is what makes them so real. Being a Corrections Officer or a captain of a ship or an ER doctor; you don’t go to medical school to play the doctor, you go to the place of the arrogance or confidence that it takes to make life or death decisions at a split second and be OK with what the outcome is. That’s what’s interesting about playing that guy and that’s the sort of research you need to do for that type of character. So you would think about that and maybe talk to some people about it.

For Con Air, Billy Bedlam was just so angry at everything; to kill his girlfriend and then go over to the next town and kill everyone associated with her, something has happened there. So you go back to when your heart was broken and you take how you were feeling and multiply it by a million times, then you start thinking where you get so angry. Normal people calm down after 5 minutes or an hour but this guy just kept on going for 5 weeks or a year and it escalated from there.

ALEX: When working on a difficult set, surely that must inflect on your character. We’ve heard that the shoot for Tears of the Sun was pretty tough; can you tell us what that was like to work on?

NIC: Yeah and it’s tough whenever what is going on on set doesn’t serve your character so if it’s a tense or dysfunctional set it would be harder to play a happy, carefree, jovial guy. So yeah that would be an uphill battle.

With Tears of the Sun, everybody got a long and Bruce was great to work with. There were just script issues and where the film was going issues that caused problems.

ALEX: So you’re not in a hurry to do a sequel to that one?

NICK: (laughs) No they’re not getting that; they might do Sobbing of the Sun though…

EOIN: You’ve worked in TV and movies; do you have a preference as an actor?

NICK: TV has become so brilliant that if you’re a regular on a show then you’ve got this huge long canvas that blows two hours away for a film. You’ve got 100 or even 200 hours but television just moves really quickly; they shoot a lot more days and you get a couple of takes then you’re out. With film they shoot more angles, more setups and more takes so you get a chance to really go further with each scene which can be fun or tedious. The medium is not so much important as are the nuts and bolts which are who you’re working with, what the script’s like and how you connect with it.

ALEX: You have completed two more action film Mercury Plains and The Prey – what can you tell us about those?

NICK: I’m really excited about them! I think Mercury Plains might be some of the best work that I’ve ever done and I’m hoping that it gets a good life.  I saw it and Scott Eastwood is everything that people are talking about. I mean he’s a real movie star! That’s going to be exciting to see his rise; he’s a great actor and this is the first time in a long time where I’m really proud of my own work.

The Prey I’m hopeful for; it was a lot of fun to shoot but there were a lot of practical effects which sometimes look genius when you’re shooting them and sometimes not but I hear it’s amazing. The Hensman brothers are geniuses so I‘m looking forward to seeing the final product.

ALEX: You’ve been in so many films; what roles do you find people recognize you the most for?

NICK: I would say X-Files, Con Air and Training Day. It’s always a fun game to play. “Hey man, you’re that actor from…” “You were in that movie…” then you say something and they’re like “No… no that’s not it” then they finally get it… or they never get it (laughs).

ALEX: It must be kind of a thrill though to know that you’ve made that mental bookmark in somebody’s psyche…

NICK: Oh its fantastic and I‘m very appreciative of the love I get from fans occasionally. What I usually get is “Oh man, I love watching you work!” or “you play a great bad guy!” or they give more specific instances of how moving something was. That’s why I do it, to reach out and touch people so it’s fantastic to get that kind of feedback.

EOIN: I can say without a word of a lie that Con Air is arguably my all-time favourite film.

EOIN: Even at the time it got great reviews and still holds up well with fans.

NICK: It’s genius; Scott Rosenberg really knows how to write characters; Simon West really shot it beautifully right out of the gates of doing commercials. Jerry Bruckheimer believed in him, took a chance on him and he delivered. John Cusack really got the tone of the film and nearly 20 years later that’s what really shines out to me.

EOIN: I think a lot of people don’t get that it’s meant to basically be a comedy but it still has enough drama and heart to keep you engaged too.

NICK: Exactly! You got it; you’re a fan for a reason because that’s what it was. It was a fine line to tread where you get too campy and not action hero enough or one of the other. It was well done by a lot of people.

ALEX: When you say nearly 20 years ago you make me feel really old, Nick. Pretty sure it was only out 2 years ago…

Close Range is out now on Video on Demand.