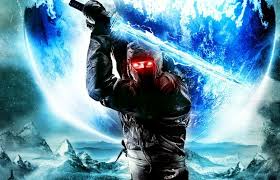 Plot: Framed for assassinating the Grandmaster, the Lost Ninja Clan must battle their way up an underground nuclear bunker filled with hordes of supernatural enemies, mutants and flesh eating zombies. Trapped a thousand feet below the earth’s crust, these ninjas will face hell.

Review: I’ve been excited for Ninja Apocalypse for a while now; it was just the kind of movie I love and the sort of film we used to get back in the 80’s. The movie even comes complete with awesome cover art just like Revenge of the Ninja.

It actually turns out that the movie was quite different from what I was expecting and was a cross between The Warriors and last year’s Extraction. Aside from those similarities it manages to be quite imaginative with unusual visuals and impressive fight scenes.

Sadly, Cary-Hiroyuki Tagawa has a smaller role than I would have liked but he does have one of the action highlights of the film; the “triplekill” is something I haven’t seen before and despite the film’s modest budget the visuals are pretty impressive. Sure, there is some CG in places but it’s frankly better than I’ve seen in a lot of blockbusters and the fight scenes are nicely shot too.

The story itself is preposterous with everybody having all these insane powers, but it’s the kind of movie that doesn’t require an explanation; it’s a post-apocalyptic movie with ninjas and zombies, it’s meant to be crazy and it succeeds.

What surprised me was the serious tone of the movie; it isn’t played for laughs but is actually quite stone faced. I actually liked that there weren’t any winks at the camera referencing other movies, and it ended up being pretty well paced with inventive action scenes too.

There is plenty of violence too, with limbs being cut off and zombies being destroyed in the second half. There isn’t even an explanation as to why there are zombies… there just are.

There were a few plot twists which I didn’t see coming which just added to the fun and I can definitely see a sequel happening.

The acting is better than you’d maybe expect and the cast in general do a good job keeping their faces straight.

Overall, Ninja Apocalypse is certainly a acquired taste and it won’t be for everyone but it has enough innovation and and cool fight scenes to be worth checking out over a few beers.