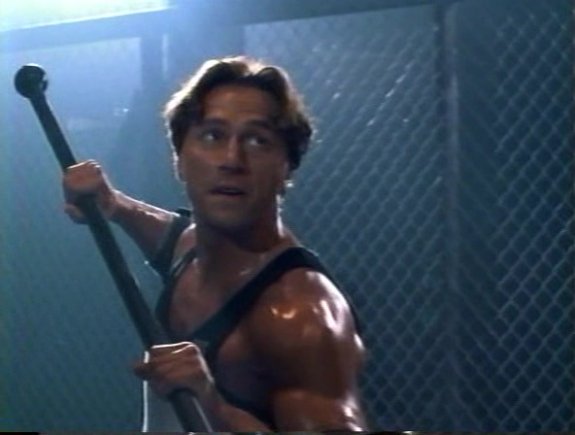 No Exit remains relevant today with an interesting subject matter and some decent action. It has a bit more depth than you’d maybe expect and is definitely worth checking out.

Plot: Professor John Stoneman Teaches at the local university. John philosophy is to prevent violence and handle any situation without hurting anybody. But his way of life changes when a few punks attack his wife and stab her, which causes her to lose her baby. This incident catches the attention of a man who makes illegal broadcasts of fights between two people, where they have to kill or be killed. John is kidnapped by him and is brought to the place where all the fights are taking place. At first John refuses to kill any opponent, but will he change his mind when his wife’s life is on the stand…?

Review: If you watch No Exit AKA Fatal Combat you may find it seems rather familiar and that’s because The Condemned practically ripped off the entire story. In this movie Jeff Wincott is a Professor who is against violence and yet keeps finding himself beating people up.

When his wife is attacked by a group of thugs, he accidentally kills one and is chosen to join a group of men in the middle of nowhere and forced to fight to the death. They have explosive wristbands and the fights are watched by an “Elite” group of viewers who have a taste for blood-sports.

This is a surprisingly harrowing movie in places, especially the young guy getting raped by Darcona (Sven-Ole Thorsen). You don’t see it happen but you know what’s going on and it’s enough to make you feel ill. Sven is on classic villain duty here and is a complete nutjob who genuinely crushes his enemies.

However. I have to give props to Richard Fitzpatrick who plays Armstrong, the man running the show as he is one of the most smug, hateful bad guys you’ll ever see. Thankfully his comeuppance is rather satisfying but he gives a great boo-hiss performance and you will love to hate him.

It is a little slow and you’d maybe expect a bit more in terms of fighting, but this movie actually has more to it than action and questions the whole idea of voyeurism. When is killing justified, etc.? A recurring theme in Wincott’s 90’s movies is violence in movies/television and how it affects real life so it’s all very relevant today.

One of the best scenes is actually Wincott’s opening scene where he isn’t fighting but going up to a Jewish student in a classroom and insulting him, calling him pretty offensive names and you’re wondering what the Hell is going on. We discover that he’s a Professor and he’s teaching the student how to avoid conflict, unless absolutely necessary. It’s a real attention grabber and must have been hard for both actors to go through that scene.

In terms of action, there is plenty of martial arts and it all has a satisfactory conclusion, but I would have liked a bit more ass kicking.

The music is awesome with pounding drums and epic electric guitar only making the action more involving. I would love to buy the score but alas, no such score exists.

Overall, No Exit remains relevant today with an interesting subject matter and some decent action. It has a bit more depth than you’d maybe expect and is definitely worth checking out.