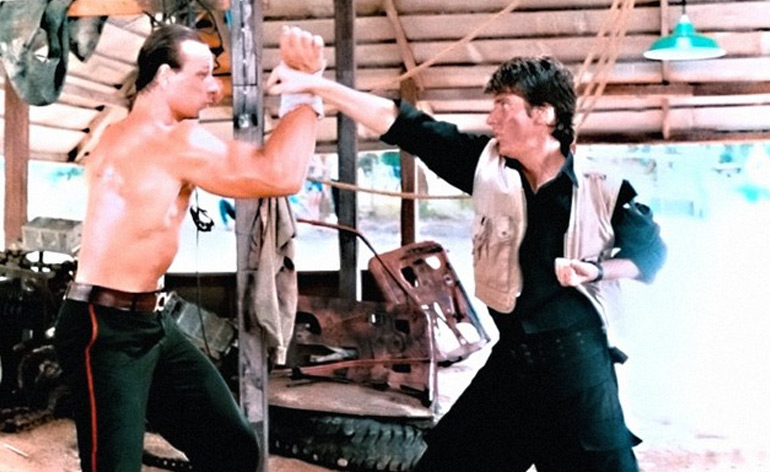 No Retreat No Surrender Part 2 vs. Part 3

No Retreat No Surrender 2: Raging Thunder turns 30 this year so what better time to compare it with the third entry in the series? I go into some spoilers in this article so if you’ve never seen the movies then best move along.

I never really understood why this was called No Retreat No Surrender 2 as it bears no resemblance to the original movie; they should have just called it Raging Thunder. Apparently it was never meant to be a direct sequel. According to IMDB in an interview, Keith W. Strandberg claimed that the title was decided on because of the popularity of the first film. Jean-Claude Van Damme and Kurt McKinney were set to star because of their contracts with the Seasonal Film Corporation but would not have reprised their roles from the original movie.

Anyway, Raging Thunder stars Loren Avedon who plays a martial artist whose girlfriend has been kidnapped by Russian and Vietnamese troops. He teams up with his arms-merchant buddy (Max Thayer) and their pilot (Cynthia Rothrock) to stage a rescue in Indochina.

If you were to watch the movie now for the first time you’d probably laugh at how cheesy and badly acted it is but it’s always had a place in my heart and has plenty of action. Loren Avedon could certainly move and his fight scenes are particularly impressive. Cynthia Rothrock gets several scenes to show off her martial arts prowess too but I can’t help but feel she was underused and I hated how she got killed off at the end.

The movie is also far too long and despite only having a runtime of an hour and 45 minutes it felt longer and could have trimmed a few scenes just for pacing.

Matthias Hues is on villain duties and he is frankly just awesome; he looks bored while fighting as no one can really provide him a real challenge. One classic scene has him fight with a prisoner who he toys with then allows to run away, but then shoots him a few times and feeds him to some alligators that he keeps in a pit nearby. I plan on getting one of those installed in my place soon.

His final battle with Loren Avedon is a highlight and it should be noted that Hues’ death scene is one of the all-time great bad guy deaths.

Overall, despite being overlong and having some dodgy acting No retreat No Surrender 2 is still a lot of fun even after 30 years.

Loren Avedon returns once again but this time he plays a completely different character called Will Alexander and Keith Vitalli plays his brother Casey. The two brothers don’t see eye to eye and share different political views but when their father is brutally murdered by a terrorist group they join forces to avenge him.

For the first half of this movie I really didn’t like the character of Will; he seemed like a whiny little bitch and I thought Avedon’s character in Raging Thunder was far more interesting. Keith Vitalli was a fun addition as his character was quite smug and arrogant so they both played off each other nicely.

Rion Hunter plays the albino looking villain Franco who is the man responsible for the brother’s father getting killed so they do whatever it takes to get close to him to take him down. Franco is controlled and rarely loses his cool but I found him less entertaining than Matthias Hues.

I think the fight scenes in this entry are possibly superior to Part 2 and the final battle between the two brothers and the villain Franco is well done. It takes a little while for things to get into gear action-wise but when the fights begin then the movie gets into its stride.

It never takes itself too seriously with its tongue planted firmly in its cheek. One of the best scenes is when Will goes into a bar trying to look tough (wearing shades) so he’ll get hired by the bad guys… it works and I’m going to try it this weekend.

Overall, Blood Brothers has arguably superior fight scenes than part 2 but I found Will Alexander a less sympathetic character than Scott Wylde from part 2.

I’m going to have to go with Raging Thunder here mostly because it’s called Raging Thunder but also Matthias Hues’ villain, his epic death and frankly just the sense of chaos that the film has throughout.