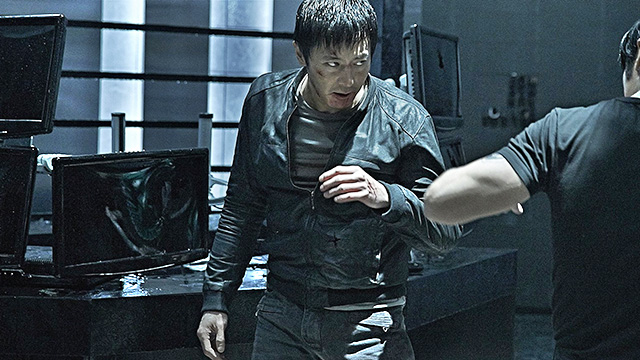 No Tears for the Dead has some incredible action sequences and great performances by the cast; it’s let down by some dull pacing in places and isn’t quite as intense as it looked from the trailers. It is definitely worth seeing though on the big screen if you’re looking for a more adult oriented action movie.

Plot: Abandoned by his mother shortly after immigrating to America, Gon is raised by the mafia and grows up to become a cold-blooded hit-man. Though usually flawless in taking out his targets, Gon makes a terrible mistake of killing an innocent young girl. A flood of guilt takes over his life and the situation becomes worse when his boss assigns him the job of killing the young girl’s mother. Gon’s new target, Mogyeong, is a risk manager at an investment firm and has buried herself in work to bury her grief. She is completely unaware of her role at the heart of a dangerous conspiracy. Finally, she meets the man who wants to tell her the truth behind the death of her child.

Review: No Tears for The Dead has been my most anticipated movie for a while; from the trailers it looked like it was going to have some jaw-dropping action and an intense story, so did it live up to expectations? I’d have to say… eventually.

It does take a while to get going and is also a bit melodramatic in places; there’s far too much crying and not enough necks snapping.

The movie certainly has heart though and there were a few moments which were genuinely emotional.

Dong-gun Jang is perfectly cast as ruthless hitman Gon and he really looks the part with eyes that constantly look haunted. He is quite difficult to sympathise with at first but we soon realise he is riddled with guilt after accidentally killing a child in the brutally effective opening scene.

It’s great to see Brian Tee in such a big role as the main villain (and also friend of Gon). He has real screen presence and deserves to be a huge star. He arguably steals the movie and his character is the most interesting as he isn’t an out and out bad guy.

Once everyone has finished feeling sorry for themselves though, the action really kicks in and it’s some of the most spectacular I’ve seen for a while, especially the rooftop shoot-out which has a real sense of scale. The gunshots echo around the neighbourhood and people are just torn apart by bullets. No Tears for the Dead is as violent as you’d expect and reminded me of The Raid with some of the insane fight scenes.

I will say though that I preferred The Man from Nowhere; it had a more memorable visual style and the final twenty minutes were outstanding.

No Tears for the Dead’s finale is still suitably blood-soaked with Gon desperately trying to save Mogyeong from the men trying to kill her but it just lacks… something and I can’t quite put my finger on it.

The story isn’t very original reminding me of The Replacement Killers, The Killer and practically every other ‘hitman with a heart’ movie but it does have enough originality to make it interesting.

Overall, No Tears for the Dead has some incredible action sequences and great performances by the cast; it’s let down by some dull pacing in places and isn’t quite as intense as it looked from the trailers. It is definitely worth seeing though on the big screen if you’re looking for a more adult oriented action movie.