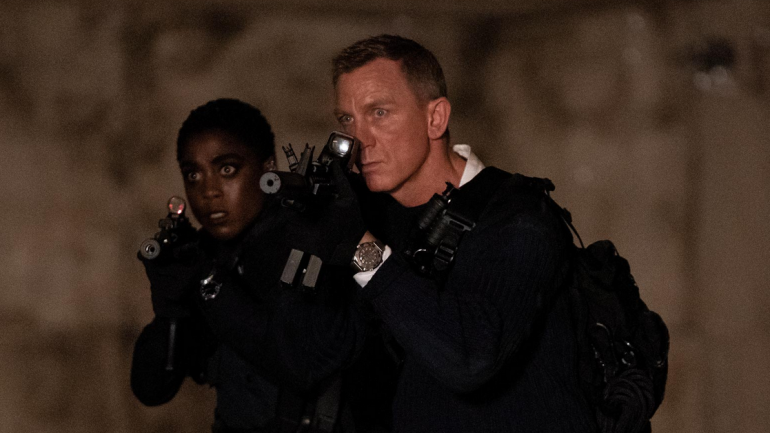 No Time to Die is going to be the most divisive Bond film of all time and I think many fans (like myself) will hate what they did with it. It isn’t badly made by any means and has a few decent set-pieces but lacks the sense of fun that past entries had and after that ending I have no desire to ever watch it again.

Plot: In No Time To Die, Bond has left active service and is enjoying a tranquil life in Jamaica. His peace is short-lived when his old friend Felix Leiter from the CIA turns up asking for help. The mission to rescue a kidnapped scientist turns out to be far more treacherous than expected, leading Bond onto the trail of a mysterious villain armed with dangerous new technology.

Review: *MINOR SPOILERS ENSUE* After various delays thanks to the Covid pandemic Bond is finally back in Daniel Craig’s final outing as 007. So has it been worth the wait? Simply put, no. I’m still trying to process what I just watched but as a lifelong James Bond fan I can only imagine that Ian Fleming must be turning in his grave.

Daniel Craig has spent the majority of his tenure as James Bond complaining about it and aside from Casino Royale his movies are for the most part joyless affairs desperately trying to be gritty and serious but rarely having the sense of fun which is what has always been the appeal of 007. The character was essentially a male wish fulfilment fantasy where he kills the bad guys, gets the girl and saves the day but I guess we’re not allowed to do that anymore.

A part of me wishes the Austin Powers movies never existed as they essentially killed the formula for Bond and turned it into a joke so I do understand why they have tried to make a more grounded version of Bond. Craig himself even said in an interview a few years back that it was hard to do a old school Bond movie after Austin Powers.

Craig’s iteration of Bond seems to suffer from depression and especially in No Time Die it feels like he has just given up on life especially the scene in the Aston Martin where the bad guys are shooting at them and he just sits there almost asking for it to end. Admittedly that is the best action scene of the film but it does lay the groundwork for the type of movie this is going to be.

I was enjoying the first 40 minutes and there were some slick action scenes; the sequence in Cuba with Ana De Armas was fantastic and she was a welcome breath of fresh air and my favourite aspect of the entire film; I wish she had a bigger role as she is one of the best bond girls of recent times.

There are lots of nods to classic 007 movies and a few choice one-liners; I also thought the henchman Cyclops was a highlight and felt like vintage Bond.

This was nearly going to be a 3 or 3.5 star movie but then decisions were made for the 3rd act of this movie that will divide the fanbase the way The Last Jedi did. I’m actually struggling to form coherent sentences here without spoiling anything but I have never been so angry walking out of a film at the end.

As others have said this is far too long at nearly 3 hours and it felt it; the pacing was sluggish at times, the plot convoluted and despite some truly spectacular action scenes I felt there weren’t enough stakes. As I said above it had its moments especially in the first half but it then felt like director Cary Joji Fukunaga and Barbara Broccoli especially wanted to close the book on this franchise… permanently.  There were several twists and many will think this was bold filmmaking and I suppose it was but I am sick of seeing my childhood heroes getting disrespected by modern Hollywood.

The story continues on from where SPECTRE left off and references a conversation that was had in said film about a visitor to Madeleine’s house when she was a child. I liked the connection and it’s been interesting to see a Bond series of films with a connecting arc which is something rarely done in the franchise before.

Everyone keeps saying how they think Craig is a great Bond… why? Aside from Casino Royale he never actually goes on a mission and he just mopes around showing little sense of duty for his job. He walks away from it constantly and in this one he ends up working for the CIA instead!

Rami Malek was underused and lacking in threat as Lyutsifer Safin and his motivations for his grand scheme weren’t particularly clear; it didn’t help that in IMAX we struggled to hear some his dialogue.

The trailers made Lashana Lynch’s character Nomi look like she was going to be obnoxious but she was actually fine and had some decent banter with Bond. I’m still not sure why she seems to hate Bond simply for existing but I guess she is representing modern sensibilities. You’re probably thinking the reason I gave this such a low rating is it trying to be “woke” but that’s not it at all; I’m referring to the finale and once you’ve seen the movie if you are a lifelong Bond fan like I am then you’ll understand why I feel the way I do.

Léa Seydoux is more fleshed out this time as Madeleine but Christoph Waltz was wasted as Blofeld and you have to wonder why they even brought the character back just to treat him like that.

Casino Royale remains Craig’s best outing as 007 but I’m not sure I will want to watch any of his Bond films again after this. I get that it is for a modern audience so it’s more somber but I do miss the days of gadgets, double entendres and basically the sense of outrageous fun that the franchise used to have. Like I said there were a few moments of humour but there wasn’t much sparkling dialogue that you’ll quote later.

Hans Zimmer’s score has some nice moments referencing some classic Bond themes and and Billie Eilish’s title song is perfectly miserable for the tone of the film.

Many have said that the only way to do Bond in the future would be to actually have it set the 60’s which I used to agree with but I think perhaps it’s time for Bond to hang up the tux as M said in Goldeneye “you’re a relic of the cold war” and it’s hard to see Ian Fleming’s James Bond find a place in the modern world.

Overall, No Time to Die is a Bond movie you’ll never forget but whether that’s a good thing or not is up to you. Try to see it before the twists get spoiled and if you liked the movie then good for you but I am still trying to get over what I just watched.