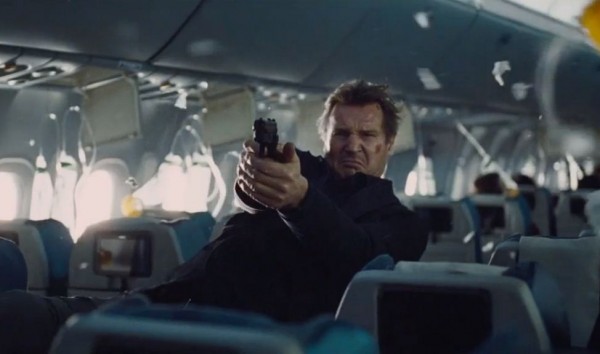 If you’re looking for a contained thriller with plenty of tension and action then you’ll love Non-Stop. Strap in tight and prepare to never want to fly again.

Plot: An air marshal springs into action during a transatlantic flight after receiving a series of text messages that put his fellow passengers at risk unless the airline transfers $150 million into an off-shore account.

Review: Liam Neeson once again proves he’s one of the best action stars in the business with Non-Stop, a hair-raising thrill ride of an action thriller.

It’s a contained movie, sort of like the original Die Hard where nearly the entire movie is set inside a plane. Its starts off a little gloomy and at first I thought “Oh it’s one of those modern movies where everyone is depressed” but I’m pleased to report that is not the case.

Liam looks genuinely sad and disheveled at the beginning and he has clearly had tragedy in his life, which we don’t find out until towards the end.

It keeps you guessing who the villain is with one red herring after another; is it this guy? That guy? So by the end you’ll be completely worn out. It gets unbearably tense but also isn’t short of action with Liam beating up a few people along the way for good measure.

Julianne Moore is never bad in anything and this movie is no exception; although you aren’t sure if she’s good or not, you’re so hoping she isn’t the villain.

Michelle Dockery played Air Hostess Nancy who pretty much looks untrustworthy from the start; is she evil? Well, you’ll just have to watch the film for yourself.

The CG during the finale isn’t the greatest and reminded me a bit of Air Force One but it wasn’t too bad, I’ve seen plenty worse.

The film went into some interesting themes about modern security and asked some poignant questions… in between the punching, shooting and exploding.

It took me a while to relax after watching it and it’s easily one of Neeson’s best roles in years.

Overall, if you’re looking for a contained thriller with plenty of tension and action then you’ll love Non-Stop. Strap in tight and prepare to never want to fly again.