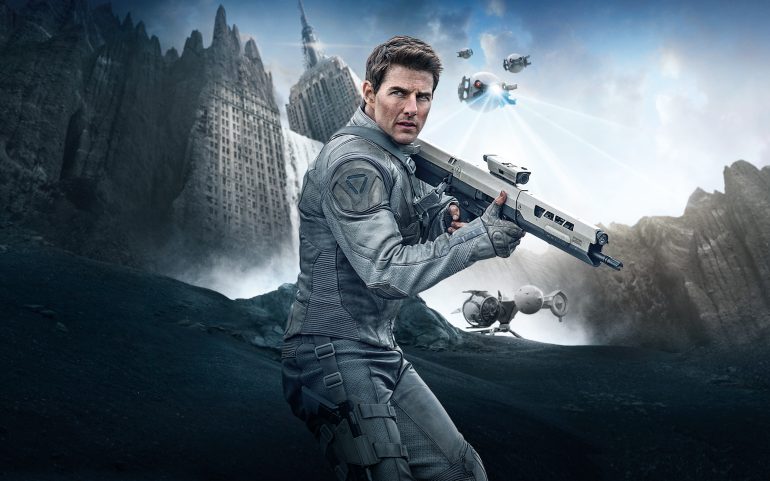 Even if you aren’t a fan of sci-fi you should see Oblivion on the big screen as it has some of the best visuals you’ll ever see, a great score and excellent performances.

Plot: A veteran assigned to extract Earth’s remaining resources begins to question what he knows about his mission and himself.

Review: I’ve been looking forward to this movie for a long time and finally got the chance to see it tonight and I’m pleased to say that it didn’t disappoint. It’s not flawless but we’ll get to that. I can safely say that it is one of the most visually perfect movies I’ve ever seen. Just jaw dropping visuals from beginning to end and I foresee this becoming a sci-fi classic in the coming years.

There are scenes which will stay etched in your mind for days after watching and one scene actually wasn’t even action; it was involving a swimming pool at night; just the visuals and the music make the scene a work of art.

Speaking of the music, Oblivion has the best score since Tron:Legacy, which handily enough is from the same director. Like Tron, it uses electronica mixed with orchestra to create a genuinely epic sound which transports you away to another world. I can’t stop listening to it, it’s just fantastic music and one of the all time great sci-fi scores.

The performances are all top notch but I have to say that Tom Cruise has rarely been bad in anything. No matter what you may think of him, he’s a talented actor and his films are always worth watching. This is one of my favourites of his and I can’t wait to see it again.

Cruise is extremely sympathetic from the very start so you are with him all the way. Morgan Freeman doesn’t have all that much to do but when he’s in it, he’s great. Olga Kurylenko is a Goddess and gives arguably the best performance of her career.

As great as all that is though, like I said it isn’t a perfect movie; it does feel (especially in the second half) like several other sci-fi movies including Moon and obviously 2001. It is a little predictable and you kinda see the twists and turns coming.

Those little niggles weren’t enough to ruin the film by any means and I found it an almost euphoric experience with some genuinely breathtaking moments.

Joseph Kosiniski is going to be seen as one of the greatest visual directors of all time as the way he mixes music with what’s happening on screen is something really special. I think he should direct one of the upcoming Star Wars sequels because he would make them unforgettable.

Rather than using CGI all the time, he uses real locations and adds the odd thing digitally which works so much better. There are some spectacular pieces of camera work too with some great tracking shots. There’s also zero shaky cam which puts him at the top of my list as a genuinely talented director.

Overall, even if you aren’t a fan of sci-fi you should see Oblivion on the big screen as it has some of the best visuals you’ll ever see, a great score and excellent performances.