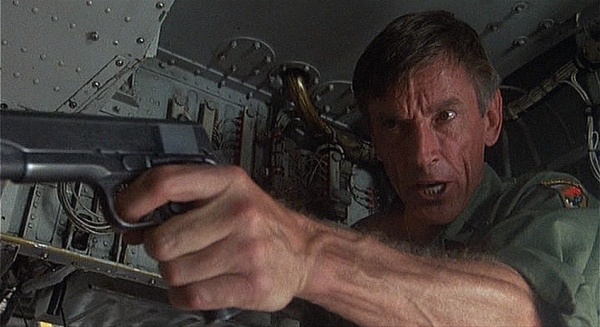 So technically this movie was released in March 1988 but I’ll put my hand up and say I hadn’t even heard of Off Limits until recently; thanks to Chad Law talking about it the other day I thought I would give it a watch and I’m glad I did.

Off Limits stars Willem Dafoe and Gregory Hines as McGriff and Albaby who are probably doing the worst law enforcement job in the world – they are plain clothes U.S. military policemen on duty in war-time Saigon. However, their job becomes even harder when they start investigating the serial killings of local prostitutes. Their prime suspect is a high ranking U.S. Army officer which puts their lives in danger.

It wastes no time getting going immediately creating a threatening atmosphere where violence can break out at any time; luckily McGriff and Albaby can handle themselves so when they come across angry locals vying for blood they can (most of the time) handle it.

They get some help along the way from local nun Nicole (Amanda Pays) who has a French accent one minute then gives up by the second half and sticks to her native English accent.

It’s a sleazy little tale with talk of hookers and sexual encounters never shying away from how some soldiers behaved during the Vietnam war.

Dafoe and Hines make a great double act trading banter as they get deeper into this sordid tale; although there is some humour this goes quite dark in terms of tone with our heroes hitting rock bottom towards the end especially Hines (RIP) who is still sorely missed from cinema.

There is plenty of action with shoot-outs, fights and explosions but it’s never unbelievable with tensions always running high and our two cops testing the patience of the locals.

It’s a little predictable and you’ll know from the opening credits who the bad guy is but Off Limits still has a fantastic supporting cast including Keith David, Scott Glenn and Fred Ward. There are some harrowing and intense scenes including an interrogation in a helicopter which should be regarded as one of the best of the 80’s.

After 30 years I’m surprised more people don’t talk about Off Limits but it’s definitely worth tracking down as it’s a bit of an underrated classic. Thanks Chad!