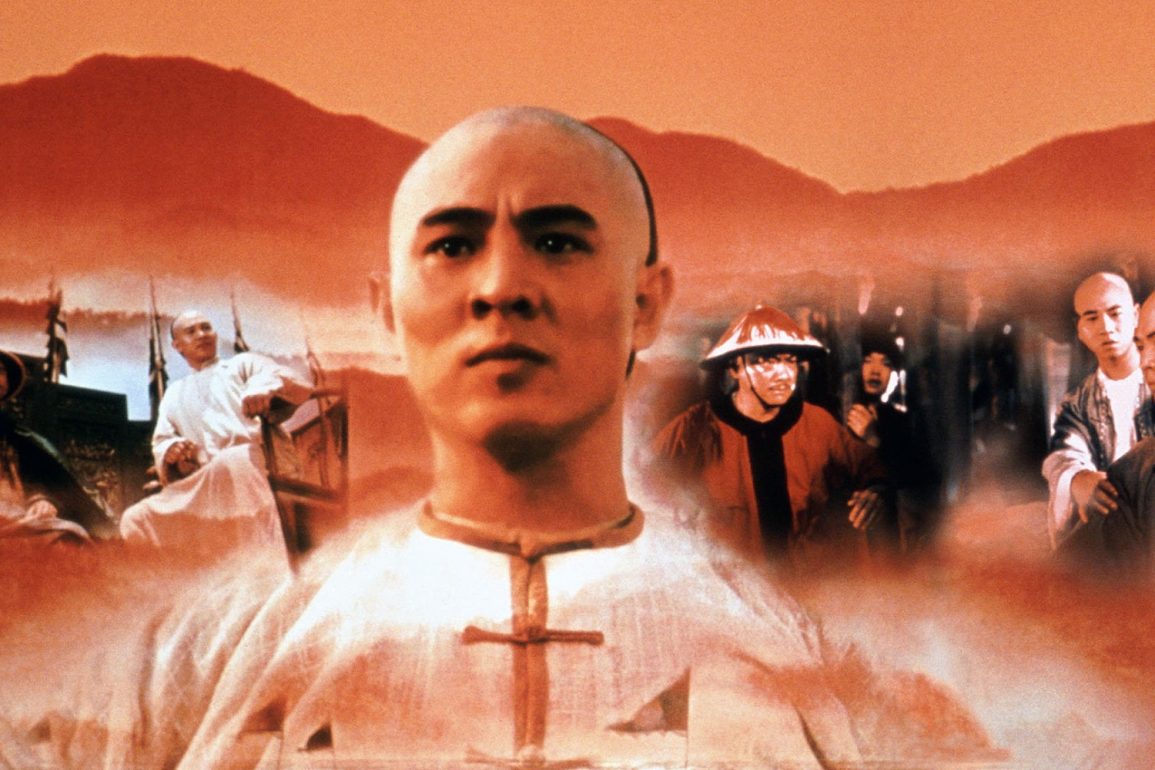 Once Upon a Time in China Collection Eureka Blu-ray Review

I recently picked up the Once Upon a Time in China Eureka Blu-ray box set and I admit that I had only ever seen the first movie previously so I figured it was about time I reviewed the series as we haven’t covered it before. So let’s begin with the first movie… which makes sense.

Plot: In 19th century Canton, Wong Fei-hung battles ruthless imperialist forces determined to subjugate his country and enslave his people, leading to a climactic fight sequence still regarded as one of the best ever filmed.

Jet Li stars in one of his most iconic roles as Wong-Fei Hung the now legendary Chinese folk hero. Several actors have played Wong-Fei Hung over the years but Jet Li has very much made the character his own and in this first movie he portrays him as a man struggling to see a future in the modern world as his family/friends have been to America and are boasting about the new technologies from the West. Wong-Fei Hug sees that the future of martial arts is in danger as guns are becoming the weapon of choice for the military and criminals. Facing betrayal from allies and constant harassment from the local police Hung tries to be a man of piece but his “militia” keep getting into fights and bringing the law after them.

As with so many of these movies every Western character is pretty much the Devil himself and all rather one note villains but the main selling point is of course the martial arts and when Jet li was young there were few who could compete. He is incredible in this where the camera can barely keep up with his movements and there are so many great fights it’s difficult to choose just one however, the final battle between Wong-Fei Hung and another master using ladders as weapons (amongst many other things) is a definite highlight. Another great fight is Hung using an umbrella as a weapon and the choreography is simply breathtaking. Yes, there is a little wirework (and you even see wires at one scene) but it doesn’t bother me in the slightest as this is more of a fable (as Scott Adkins said a while back) so it’s not exactly going for a documentary.

It takes a little while for the action to kick in but t’s worth the wait and the final 45 minutes is practically one prolonged epic fight scene.

Yuen Biao also stars as Leung Foon who is looking for a master but turns to a newcomer who ends up working with a local gang. There is a great supporting cast including Jacky Cheung and Kent Cheng making this a must-see for kung fu fans.

Overall, Once Upon a Time in China is a classic martial arts film with Jet Li at his best; when the action comes it hits hard and is profoundly satisfying.

Plot: Wong Fei-hung faces off against the White Lotus Cult, a dangerous xenophobic group seeking to drive all European influence out of China, as well as a corrupt military officer, played by Donnie Yen in his breakthrough role.

In this sequel to the acclaimed martial arts epic, Hong Kong superstar Jet Li stars as Wong Fei Hung, who becomes caught up in the chaos surrounding the collapse of the Ching Dynasty when he travels to Canton for a medical conference.

Once Upon a Time in China II is arguably the best of the series as it introduces to Donnie Yen; this was the role that really put him on the mainstream map and watching him battle it out with Jet Li is the stuff of legend.

This franchise has always surprised me with how good the story is; with martial arts films you are normally jut counting the seconds until the next fight scene but this entry deals with themes of Chinese identity and how there is unrest due to the influx of foreigners. This creates The White Lotus Clan who are nationalists and want nothing to do with the foreigners who they see as corrupting their country and identity.

Wong Fei-hung (Jet Li) has always been conflicted as he is a man who believes in traditions but knows that you have to change with the times.

Gone is Yuen Biao as Foon and has been replaced by Max Mok Siu-chung who makes the character nothing more that the idiot comic relief.

It’s easy to understand why Donnie Yen became a huge star as he has always had great screen presence. In this he plays Commander Yan who at first seems like he is one of the good guys but this is not the case leading up to the classic showdown between him and Fei-hung.

There is still wirework so if you don’t like it then this likely won’t win you over but the choreography is still incredible with several stunning set-pieces; the showdown in the White Lotus lair is a feat to behold and is one of the most insane of the series.

The Blu-ray is nicely remastered with various audio options available although the version I watched still had some dodgy accents during the English spoken scenes.

It takes a little while for anything to happen but it’s setting up the story and characters so it still moves along well.

Overall, Once Upon a Time in China II is a kung-fu classic with Donnie Yen fighting Jet Li a battle for the ages making this a must-see.

Plot: Master Wong and his disciples enroll in the ‘Dancing Lion Competition’ to stop an assassination plot and to battle an arrogant, deceitful opponent.

I don’t really love this entry of the series; the story just wasn’t as interesting and the fight scenes pretty much all are ridiculously done with wirework which immediately took me out of them.

What’s funny is how much of a dick Wong Fei-hung is in this one and he showed elements of it previously too. He’s stubborn and jealous especially when anyone comes near 13th Aunt (Rosamund Kwan). He can come across as a petulant child but he is still a force to be reckoned with when pushed. What is nice however, is that this is more of a love story as his relationship with 13th Aunt was always in the background but this time it’s slightly less secret.

Foon (Siu Chung Mok) is less of a comic relief this time around and was never annoying; he actually provides a lot of the humour which was genuinely funny. The scene where he and some of Wong’s men are trying to hide weapons in their trousers provided several laughs.

The best new cast addition was Xin Xin Xiong as Ghost Foot Seven (awesome name I might add) who looked fierce and had a great story arc I didn’t see coming.

It has a grand sense of scale shot on location in The Forbidden City so every scene there looks truly epic. The themes of modernity and “progress” are still prevalent with Wong still not wanting to truly embrace a more international lifestyle and hung up on older traditions.

Chiu Tin-Bai was nothing more than a street thugs really so he wasn’t all that exciting a villain but his constant maniacal laughter made you hate him enough.

Something about this movie just didn’t grab me; there are far too many fights featuring lion’s heads and the hand to hand combat just paled in comparison to the first two movies.

A scene in the middle where Wong rides some horses was well done however, and Jet Li’s physicality and martial arts skills are never in dispute but I do wish we got to see him do more without wires. I know I sound like a broken record but I fucking loathe wirework, so there.

Overall, Once Upon a Time in China is my least favourite of the series but it’s hardly a terrible movie; I’m just not a fan of wirework and there is too much of it during the fight scenes. Also, how do you outdo having Donnie Yen as a villain? Simple. You don’t.

Plot: Following an ambush in his visit to America, Wong Fei-hung becomes separated from his fellow travelers and suffers memory loss.

With this box set there are some excellent booklets which give some nice insights behind the scenes of these movies and for Part III and Once Upon a Time in China and America James Oliver provides some fascinating notes.

This is apparently an entirely fictitious story as Wong Fei-hung never went on a tour of America but it still manages to be a good time.

Sammo Hung takes over directing and although there is still wirework there is an energy to the action which is far superior to the last entry. Mixing the western genre with kung fu works surprisingly well and we still get the familiar themes of progress and xenophobia. I liked how we got to see how poorly the Chinese were treated during this period and it shows the struggles they went to adapting to the new world.

Thankfully Foon isn’t in this entry and is replaced with Seven who is a far more likable character and is still total badass while never being the tedious comic relief.

Although some of the acting is a bit dodgy I couldn’t help loving this movie because I am such a huge fan of Westerns. I was engaged with the story and I liked how it poked fun at Wong’s normal serious countenance.

Hearing the main theme over the end credits mixed with the Native American chants was a nice touch too.

The villains are all cartoonish and one dimensional but they are still mean enough that you can’t wait to watch Wong introduce them to his fists.

Side note: Keep your eyes open for a young T.J. Storm and Roger Yuan in early roles.

Overall, Once Upon a Time in China and America is a lot of fun with plenty of action and Jet Li still showing he has the moves to be one of the world’s greatest martial arts heroes. 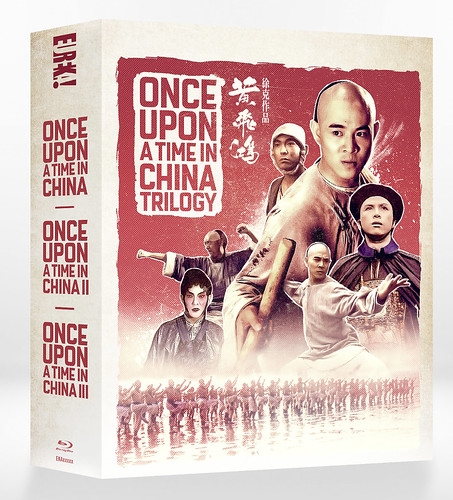 This box set has a plethora of special features that I haven’t even scratched the surface of yet but rest assured they are essential for fans of the series,