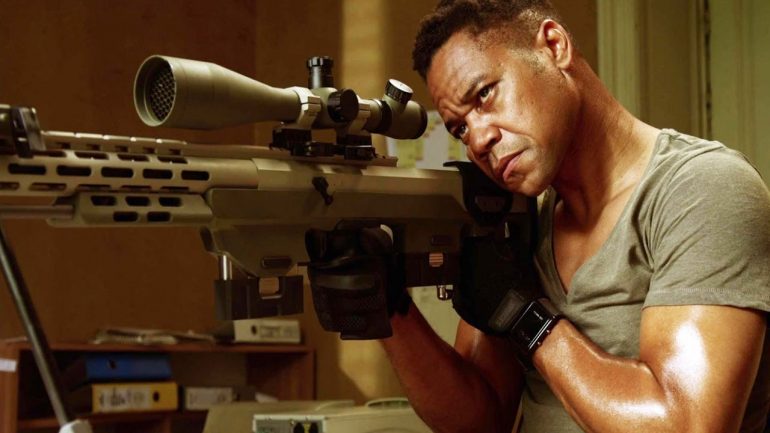 One in the Chamber is in my top ten action movies of 2012 and thoroughly recommended. Check it out or we’ll send “The Wolf” to find you!

Plot: An experienced assassin works for both sides of a Russian gang war and becomes the target of a hidden enemy.

Review: I’ve been looking forward to this one for a while as Dolph Lundgren has always been one of my favourite action stars. One in the Chamber is Dolph at his very best, playing an oddly likable assassin. He breaks fingers and murders people for money and yet Dolph’s charisma makes his characters interesting and likable. He’s never typecast as an out and out villain and his characters always have memorable traits.

His wardrobe really stands out in this movie, with his Hawaiian shirts and Sinatra-esque hat, he just oozes personality.

But that’s not to say that his co-star lets the side down; Cuba Gooding Jr. is on full badass form as rival hitman Ray. Cuba is another actor who is very likable on-screen but I don’t think I’d ever believe him as a bad guy.

Both actors are clearly having a ball and the action really is top notch; it really showcases that you don’t need $100 million budgets to have a kick-ass action movie. There is no shaky cam and the fights are hard hitting and believable.

The pace is fast but not so fast that you don’t care about the characters; the script flowed well and there wasn’t any clunky dialogue.

I thought Claudia Bassols was lovely in it; she had a very gentle and friendly personality so you empathised with her straight away. Sadly she doesn’t have much more to do than look nice and get kidnapped. However, there’s always the sequel…

Now, I don’t want to spoil the ending but the movie is primed for a follow up and I would definitely love to see where they take the story next.

I really liked the music score as well which was never overly intrusive, but really helped provide the atmosphere.

Director William Kaufman is one to watch as the man knows how to make a slick action movie. Great locations, production values and a memorable script lift this above the average direct to DVD actioner.

Overall, One in the Chamber is in my top ten action movies of 2012 and thoroughly recommended. Check it out or we’ll send “The Wolf” to find you!