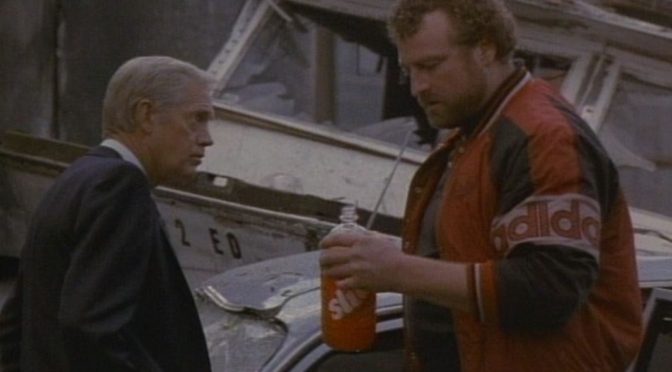 One Man Force is a pretty bad film with a poor script and some ropey acting but it sure is fun and although it’s not that memorable some of the action is entertaining.

Plot: In this action packed film, an L.A. cop speeds off to get revenge upon the dirty drug-dealing dogs who killed his partner.

Review: Did somebody order the cheese? Well that’s handy because this has plenty to go around. One Man Force is the type of 80’s movie I absolutely adore; awesome electric guitar flavoured score, a great supporting cast in Ronny Cox, Charles Napier, Sam Jones and Richard Lynch.

Our hero Jake (John Matuszak) is your typical 80’s badass who is a cop that plays by his own rules however, this movie does have a dark cloud above it, namely that Matuzak died in 1989 at the young age of 38. He also played Sloth in The Goonies but this was his shot at being the next action star; he may not have been the greatest actor ever but he had the bulk and the look of a one man army and fits this movie well. Jake is like a crazed bear who just shouts and punches his way around town as he hunts for the men who killed his partner.

The action though is sadly quite underwhelming and lacks anything truly memorable except for a rather awesome bad guy death. He is thrown off a building but is connected by a rope and rather than falling to his death he swings into a building that is on fire and he burns to death.

It’s predictable stuff which follows every cliche in the book and the majority of the acting is pretty poor too. Sam Jones is wasted in a short role and is killed in the opening few minutes, which is a shame as he never really got to shake off the role of Flash Gordon.

There are some terrible lines of dialogue in it but that’s what makes it all the more fun; it’s the ultimate guilty pleasure and requires a few beers for maximum enjoyment.

The best thing about the film is the guitar flavoured theme tune from composer David Michael Frank which is unapologetically manly and I listen to it in the gym every day; in fact my iPod now has abs.

Overall, One Man Force is a pretty bad film with a poor script and some ropey acting but it sure is fun and although it’s not that memorable some of the action is entertaining.