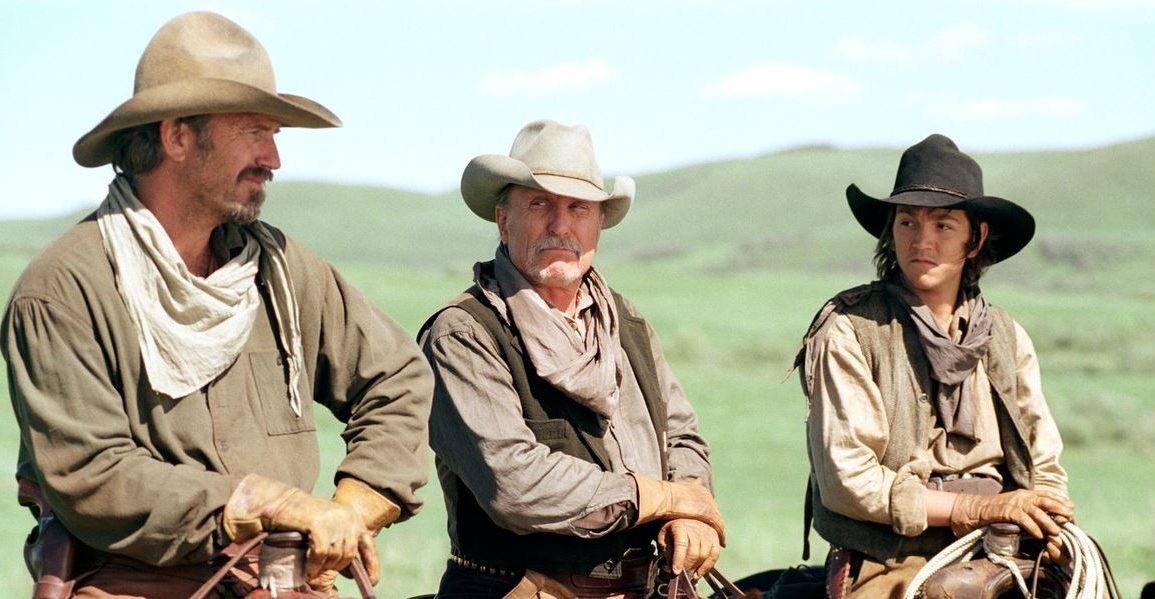 Despite a wonky accent from Gambon and a slow pace Open Range is a fantastic Western and should be watched on as large a screen as possible.

Plot: A former gunslinger is forced to take up arms again when he and his cattle crew are threatened by a corrupt lawman.

Review: I’ve always loved Westerns; the sweeping vistas and amazing landscapes with outlaws, gunfights and tough as nails characters. Open Range came out in 2003 at a time when the Western genre was essentially dead. Thankfully Kevin Costner is a huge fan as well and starred alongside Robert Duvall in one of my all-time favourite Westerns.

Filmed in Alberta, Canada Open Range looks stunning and Costner has a real eye for authenticity. The costume design and the way everyone looks feels completely believable and doesn’t make the life look exactly glamorous.

They are men who just want to raise cattle and live a peaceful life, but when they come across Denton Baxter (Michael Gambon) things take a dramatic turn and the two men are forced to take up arms.

I’m a big fan of Michael Gambon but his Oirish accent in this movie is pretty bad; could they not have hired y’know, a real Irishman to play the part?

The film may also be a little slow for some parts but you don’t watch Westerns for a quick pace; I find the longer and more slowburn they are, the more involved you get and you really get to experience that world.

Annette Benning is a great actress and she’s lovely in this as Sue Barlow, Waite’s potential love interest. I love how he is awkward around her and not used to being around women… at least women he fancies.

The score is suitably epic sounding too with a huge orchestra only adding to the spectacle.

What makes this movie such a classic though is the climactic shoot-out; when Waite walks up to one of the bad guys and says “Did you shoot my friend?” and then shoots him in the face, all Hell breaks loose and we get one of the greatest Western shoot-outs of all time.

There are some fantastic character moments like our two heroes having what they think will be their last ever cigar before the final battle, which makes their friendship feel believable and is just a nice moment of calm before the storm.

Overall, despite a wonky accent from Gambon and a slow pace Open Range is a fantastic Western and should be watched on as large a screen as possible.