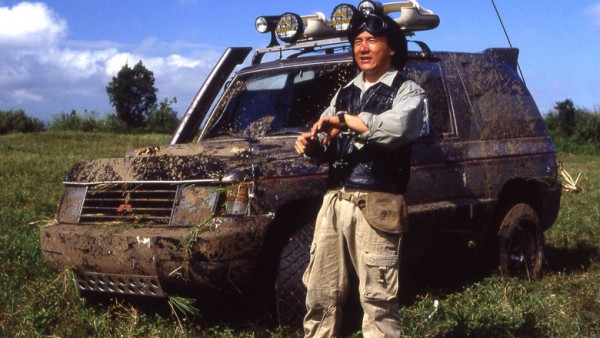 Operation Condor is one of Jackie Chan’s finest hours and is never less than thrilling and entertaining.

Plot: Asian Hawk (Jackie Chan) — code name Condor — is a secret agent for hire. Assigned by a Turkish duke to find stolen Nazi gold buried in the Sahara Desert, Condor must face mercenaries, guards and one remaining Nazi (Aldo Sánchez) who wants the treasure he helped steal all those years ago. Even after teaming up with three inept ladies (Carol “Do Do” Cheng, Eva Cobo de Garcia, Shoko Ikeda), Condor still has his work cut out for him on his hunt for the stolen loot.

Review: Operation Condor (or Armor of God 2: Operation Condor as it’s also known) is a favourite for Jackie Chan fans and no wonder; it has the usual spectacular and imaginative action scenes we’ve come to expect from Chan as well as plenty of humour.

It wastes no time in getting going with an innovative action sequence that has Chan escaping some angry natives (Ala Indiana Jones) except in an inflatable bubble as he bounces off a cliff to freedom. It’s funny, exciting and perfectly sets the tone for what is a massively entertaining adventure film.

The finale with the huge turbine fans is frankly a work of genius and the fact that this was before the days of CGI means the action doesn’t look dated. It all holds up well, although admittedly some of the humour won’t be for everyone; personally I found it hilarious.

The two supporting female leads spend most of movie bickering at each other but it’s done in such a way that it is never annoying which it easily could have been.

The villains are fun too so we get some fantastic fight scenes that are thoroughly satisfying.

No review would be complete without mentioning the awesome motorbike chase through the cramped city streets which is one of the best chases you’ll ever see.

Overall, Operation Condor is one of Jackie Chan’s finest hours and is never less than thrilling and entertaining.