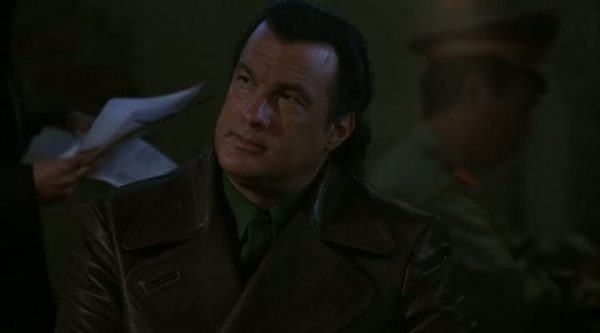 Out for a Kill is practically unwatchable in its awfulness and I recommend avoiding it at all costs. It’s not even guilty pleasure bad; it’s just plain terrible.

Plot: An unsuspecting university professor is an unwitting accomplice in a foiled Chinese cocaine deal. Wrongly imprisoned, he escapes to take his revenge and prove his innocence.

Review: I like to think I’m a pretty fair guy when it comes to reviewing films; I try to find something positive to say about anything I watch as it’s very easy to just dump all over someone else’s hard work.  Out for a Kill however, deserves every piece of abuse as it is frankly one of the worst films I’ve ever seen… and I like some bad movies.

I will always watch a Steven Seagal movie in the vain hope that it might capture the awesomeness of movies like Out for Justice, Hard to Kill or Marked for Death. Sadly, this doesn’t capture anything remotely awesome and is just a trial to watch.

This was one of the first movies I saw where Steven Seagal was dubbed over in a couple of scenes and made me think “did that really just happen?” making it come across as incredibly amateurish.

Then there are the “performances” from the cast which at times feel like failed auditions for a YouTube short, but the worst culprit is the lead villain who just sits behind a table saying “This gwilo must be stopped. He is becoming a problem!” after Seagal has killed half of Chinatown. His delivery was terrible and there was a lot of unintentional humour too; the fact that his men all sit around the table smoking cigars while trying to look scary was hilarious; I’ve literally seen better fan films than this.

We also can’t forget that bizarre fight scene where Seagal (or his body double) fights a henchman called ‘The Bird’ who can run up and down walls and behave like an animal (certainly not a bird) while also using some of the worst wirework I’ve ever seen.

I so wanted to turn the movie off but I figured it might get better towards the end so I kept going; in its favour Seagal is the lead and it’s not just a glorified cameo which many of recent films have been.

It also has a few imaginative kills and Michelle Goh and Tom Wu do their best with what they’re given; I understand that indie film is tough with ridiculous deadlines and short shooting schedules but that’s really no excuse for a film to look this incomplete.

The story is also pretty  non-existent with a tired revenge plot involving Seagal’s (unconvincing) archaeologist Prof. Robert Burns who is out for said kill to avenge his murdered wife. She probably isn’t dead but just trying to hide her embarrassment from the terrible “explosion” special effects as their house blows up. Another not so special effect is when Seagal is flying a plane with some horrendous green-screen work which is as convincing as the fight scenes.

At least the Sensei isn’t playing an ex-CIA agent for once which is a pleasant change but he still shows zero personality. I mean his wife is blown up and he never sheds a tear; you’d think he’d maybe be a little upset. Also that has to the shortest prison sentence ever with Burns being incarcerated and befriending an inmate within a matter of seconds then in the next scene he is released after about 45 minutes hard time.

Overall, Out for a Kill is practically unwatchable in its awfulness and I recommend avoiding it at all costs. It’s not even guilty pleasure bad; it’s just plain terrible.