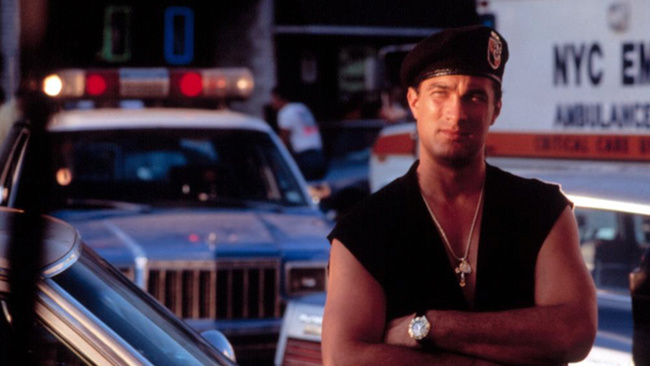 Out for Justice is easily Seagal’s best film with plenty of action and bad ass moments to be considered a classic of the genre.

Plot: Gino Felino (Steven Seagal) is a Brooklyn police detective whose partner and longtime friend is shot down in the street in front of his wife and children. The culprit is Richie Madano (William Forsythe), a drug lord in the neighborhood who has known Gino since they were kids. With the blessing of his captain (Jerry Orbach), Gino is sent alone into the drug underground to find Richie by any means necessary. Along the way, Gino uncovers secrets about his deceased partner that he never suspected.

Review: It’s a rare thing to use the word “masterpiece” for a Steven Seagal film but I definitely consider Out for Justice to be his.

I’ve discussed with a few people in the past about this film and how it could arguably be seen as a Martin Scorsese style film; the whole New York neighbourhood vibe with the childhood friends turned enemies feels like Goodfellas, Mean Streets, etc all in one movie. This is one of the few films where Seagal gives a genuinely great performance and his character feels very real and believable, despite wearing a beret…

Gino is not a man to be messed with as demonstrated in the classic “Anybody seen Richie?” scene, which is now the stuff of legend. He beats up an entire bar full of scumbags without even breaking a sweat. The film is uncompromisingly violent and the most shocking scene is when Richie shoots an unarmed woman in the head after she shouts abuse at him from her car. It’s still a very disturbing scene to this day and gives the film a very gritty feel.

None of the action is unrealistic, with only fist fights and car chases moving the story along at a breakneck (literally) pace.

As great as Seagal is in this movie however, this film is owned by William Forsythe. Richie is a drugged up psychopath and every time he is on screen you dread to see what he’ll do next. He’s a force of nature that has no conscience and you are literally counting the seconds until Gino catches up with him.

The finale is utterly satisfying with a great fight between hero and villain. Keep an eye out for an early role from Gina Gershon as well.

Overall, Out for Justice is easily Seagal’s best film with plenty of action and bad ass moments to be considered a classic of the genre.