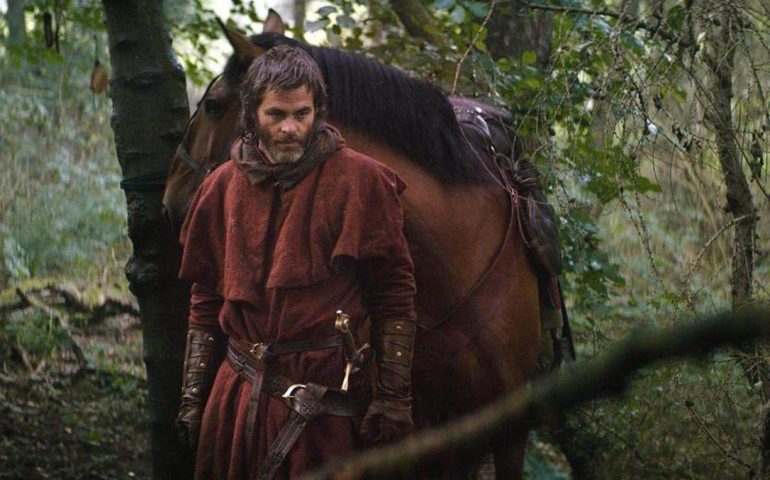 Outlaw King is far better than I expected and although many may complain about historical inaccuracies I just watched it for entertainment purposes and for that reason alone I had a blast.

Plot: A true David v Goliath story of how the great 14th Century Scottish ‘Outlaw King’ Robert The Bruce used cunning and bravery to defeat and repel the much larger and better equipped occupying English army.

Review: When I first heard that Chris Pine had been cast as Scottish legend Robert The Bruce in the new film Outlaw King I was to say the least a little baffled. I’ve never known an American actor to do a decent Scottish accent so I figured it would be quite laughable and reminiscent of Groundskeeper Willie.

I was happy to be proven wrong and Pine gives a subtle and understated performance where his accent isn’t perfect but it’s never bad enough that we’re taken out of the movie. My friend Erin thinks I’m the only person who cares if someone has a terrible accent in a movie or not and she may be right but I literally can barely sit through Braveheart due to Gibson’s awful Scottish accent.

Comparisons to Braveheart are inevitable however, Outlaw King is more of a companion piece taking place after it so it would work as a perfect double bill.

When it premiered at TIFF in September Outlaw King was an extra 20 minutes longer and I really wish I’d got to see it but as it is the film is lean and well-paced with some bloody and spectacular battle scenes. It is quite brutal at times but it felt authentic for the period as did the set and costume design.

It was filmed where I used to live in Scotland and it was quite awesome to see familiar locations in a big Hollywood film even if some were disguised with (very convincing) CGI.

Aaron Taylor-Johnson nearly stole the show as James Douglas, Lord of Douglas who joins Robert on his quest and is suitably unhinged but still likeable. Billy Howle was utterly hateful as Edward’s sniveling son Edward, Prince of Wales who has a satisfying sword fight with Robert during the spectacular finale.

I think I preferred Stephen Dillane as King Edward I of England in this movie as he was less of a pantomime villain that Patrick McGoohan in Braveheart. This does lack the memorable dialogue though like “The trouble with Scotland is that it’s full of Scots” which was a classic. Apparently a lot of the film isn’t historically accurate too but neither was Braveheart; it isn’t a documentary but an entertaining film that will at least bring attention to these iconic Scottish heroes.

Where Braveheart had an amazing music score from the late great James Horner Outlaw King lacks a memorable theme which is a missed opportunity. The music is fine but doesn’t stick with you after watching… like most modern music scores I suppose.

Overall, Outlaw King isn’t short on action with several impressive battle scenes and although it never quite reaches the scale of Braveheart it is still massively entertaining with Chris Pine surprisingly good as Robert The Bruce.