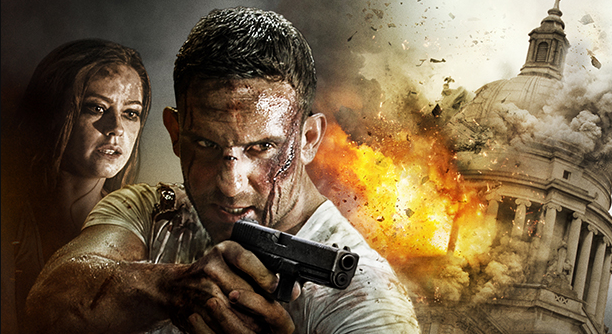 Outlawed certainly doesn’t lack ambition but the messy story and sub par acting let it down; you could do a lot worse on a drunken Saturday night though and Adam Collins is definitely going places.

Plot: An action packed story of corruption and murder. Outnumbered, outgunned and against all odds, a Commando fights his way through a siege to save his girl.

Review: If there’s one thing Outlawed doesn’t lack it’s ambition; from the Hans Zimmer-esque epic music score to the explosive action-packed finale this is a movie that feels like it should be better than it actually is.

First off, I have to tip my hat to Adam Collins who is not only the lead (who looks remarkably like Bradley Cooper) but he also wrote, produced and directed the picture which is an impressive feat in itself and frankly more than I will likely ever achieve.

Collins will surely go on to bigger better things and he certainly has the chops to be a new action star on the block; according to his IMDB page he served six years as a commando in the Royal Marines, spending two operational tours including Afghanistan. He’s also a trained specialist in military skills including helicopter abseiling / fast roping, amphibious training, unarmed combat and firearms training. He also holds a black belt in Karate and kickboxing. And I feel tired after walking up the stairs to my apartment…

Despite Collins’ particular set of skills personally I found Outlawed a little disjointed and some of the acting from the supporting cast is amateurish at best. The pacing just wasn’t tight enough with too many extraneous scenes which could easily have been cut to make it 90 minutes. The plot lacked urgency and never really grabbed me but also some character decisions just made no sense.

Maybe I missed something while scrolling through Instagram during the film but the character of Smudge is clearly a loose cannon (and also a bit of a knob) who “accidentally” is responsible for a kid getting shot and killed. Jake (Collins) for some reason comes to him for help later on stating he knew he could rely on him… you mean you can rely on the guy who was reckless, a total dick to you and killed an unarmed child? Yeah, stand-up bloke right there. At no point do we ever get the idea that this character would be helpful or nice so it was hard to believe that Jake would want his assistance with anything.

As awesome as the music score was it felt like it belonged to another film as it had a really big sound to it which didn’t match what was going on onscreen.

Like I said, Adam Collins is great though and clearly the best thing about the film where he looks the part during the action scenes and is believable in the fight sequences. Considering the film’s budget the action was pretty impressive too with some squibs, fist fights, shoot-outs and that final 20 minutes is thoroughly satisfying. The dude having his legs blown off is definitely going to miss football practice next week…

Overall, Outlawed is an entertaining enough Brit actioner with Adam Collins certainly one to watch; it’s a shame the pacing and acting weren’t better. I’ll be intrigued to see what Collins does next though.