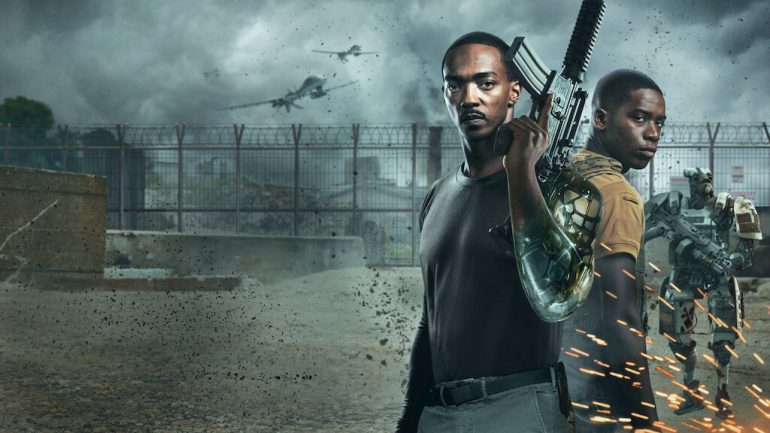 I had no real expectations for Outside the Wire so I can’t say it was disappointing; there is no shortage in the action department and Anthony Mackie is always worth watching but Harp is such an unsympathetic character that it’s hard to root for him.

Plot: Outside the Wire stars Anthony Mackie as an android officer who works with a drone pilot (Damson Idris) to stop a global catastrophe.

Review: Outside the Wire is the latest actioner from Netflix and this time it stars Anthony Mackie as a very humanlike robot called Leo who teams up with drone pilot called Harp (Damson Idris) to go on a mission to stop a nuclear attack.

Harp isn’t a particularly appealing character who questions every order and even disobeys them but his arc is that he will eventually learn the error of his ways for the greater good. I still never took to him and the majority of the supporting cast are all generally bland and forgettable too.

I don’t know what it is about Netflix films but I find I only ever want to watch them once; Outside the Wire is the same as it has plentiful action scenes and any movie featuring robots with guns deserves a watch but it’s colourless visuals give it a drab atmosphere and by the time you reach the end credits there isn’t much you’ll remember or care about.

I enjoy watching Anthony Mackie as he has an amiable presence onscreen and he does the best he can as Leo even saying “I can do this all day” as nice nod to the MCU. He is definitely the movie’s biggest asset but even then there is a little too much over editing in some of the fight scenes so you don’t get all that involved emotionally.

The visual effects are impressive for the most part and the GUMP robots are definitely the best thing about it; the music isn’t particularly memorable but it does the job for the movie.

The overly preachy message about the evils of drone strikes and war in general as well as our reliance on technology we’ve all heard before so it doesn’t say anything new in that respect.

It’s easy to understand why Outside the Wire was a Netflix film as I doubt it would have made much money at the theatrical box office.

Overall, Outside the Wire is passable enough entertainment with plentiful action scenes and Anthony Mackie bringing his usual charisma as Leo but the drab visuals and dull story make it a one-time watch. There are worse ways to spend an evening and it’s not like there’s anything else to do right now so you should check it out for yourself.