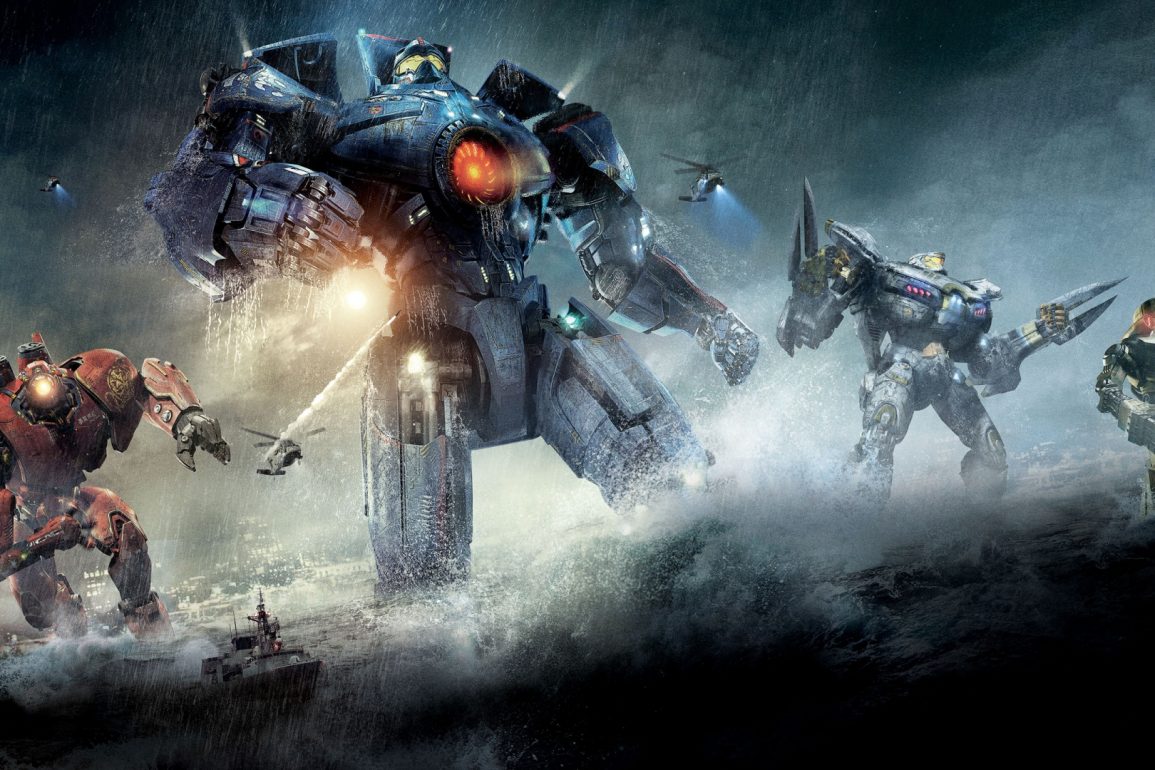 Plot: As a war between humankind and monstrous sea creatures wages on, a former pilot and a trainee are paired up to drive a seemingly obsolete special weapon in a desperate effort to save the world from the apocalypse.

Review: I love when I am looking forward to a movie and it exceeds pretty much every expectation and I’m pleased to say that Pacific Rim is one of those movies. Where a lot of people were thinking this just looks like another Transformers movie, this has something those movies don’t, heart and likable characters.

Charlie Hunnam plays Raleigh Becket, the hero of the piece, haunted by a tragedy that occurs early on the movie.

Fans of Sons of Anarchy will enjoy this very different role as he’s incredibly likable, but still a bit of a tough guy. The cast in general are great but the movie is owned by Idris Elba as the fabulously named Stacker Pentecost (Best. Name. Ever). He’s a man of few words but when he does speak it’s usually something awesome, for example “Number one: don’t ever touch me… and number two: don’t EVER touch me!”

From the trailers you are expecting his big speech to reek of more cheese than Independence Day but that isn’t the case at all. It’s a great speech and is a very stirring moment, why? Because you care about the characters and you are (surprisingly) emotionally engaged.

This movie is the return of the “fun” blockbuster; it feels like a 90s movie with outlandish characters, over the top action and a grand sense of scale. It’s easily the best movie of the summer for me because it delivered in every way. There’s no gritty angst here, it’s not a remake or adaptation but something fresh and a loving homage to the monster movies of old.

So we’ve talked about the characters and the fact that it has heart but what about the action? Well, I can safely say that the action is purely and simply jaw-dropping. Several people were literally cheering throughout it, especially when the Jaeger uses the sword for the first time.

There are so many entertaining moments that I was smiling from beginning to end. The fights between the Jaegers and Kaiju must have taken ages to design and the attention to detail, including names like Gipsy Danger and Crimson Typhoon are fabulous.

The music by Ramin Djawai is just utterly cool; as my review stated a few weeks back, it’s pounding electric guitars mixed with orchestra and has a great theme tune as well.

The movie isn’t without its flaws though; the two scientist/researcher guys were annoying as hell and the only people I didn’t like in it. I also found that too much of it took place at night so it’s sometimes difficult to see what’s going on. It’s obviously done to disguise the limitations of CGI as it only ever really looks decent when done in night time scenes.

It’s funny how I loved this movie when I normally hate CGI, but because it was done very well (despite being dark) I was just carried along with the sheer imagination on display. The Jaegers are the coolest things ever (and surely a toy company’s dream) and the Kaiju are all huge, terrifying monsters which all look fantastic.

If you have kids then take them to see this movie; they will have an absolute blast and the 12 year old in you won’t complain either.

Overall, I hope this movie is a huge hit as it deserves to be one of the biggest movies of the year.