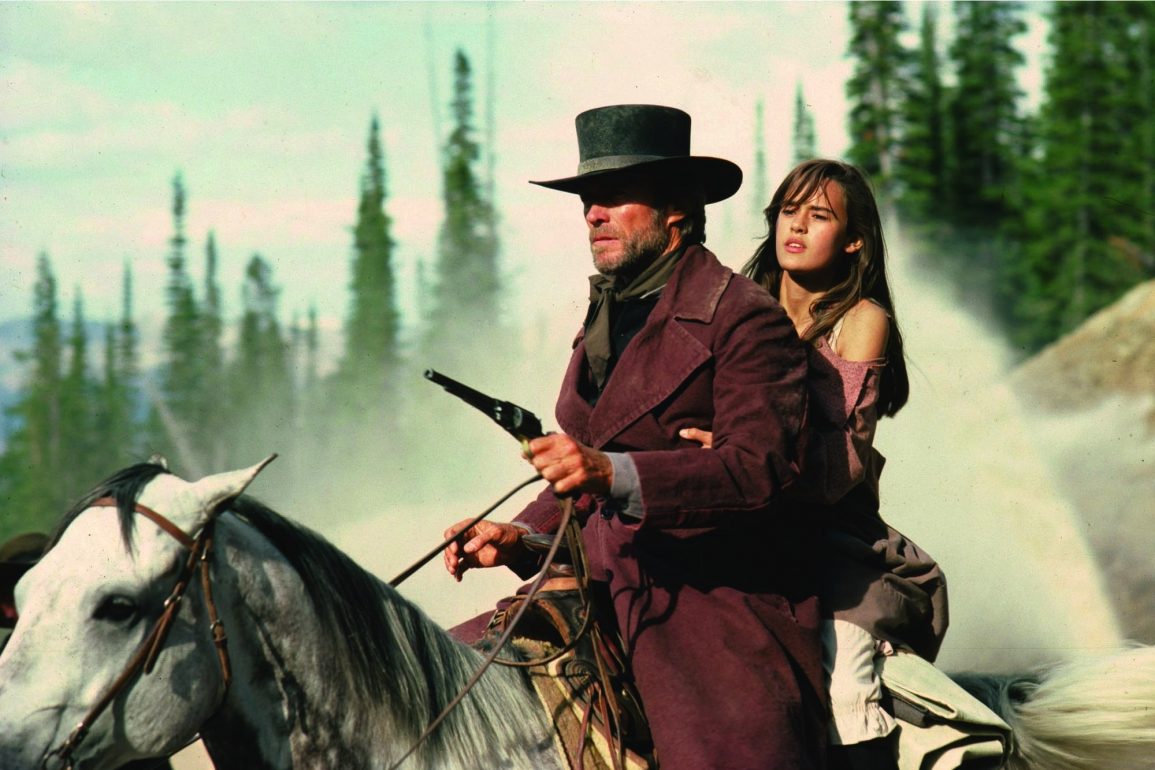 Pale Rider is one of Clint Eastwood’s finest hours with his mysterious Preacher endlessly fascinating and ice cool; he has razor sharp dialogue that is only matched by the quickness he can dispatch his enemies. It is packed with shoot-outs and the ending is thoroughly satisfying.

Plot: When property owner Coy LaHood (Richard Dysart) starts using a band of hooligans to terrorize a group of small-town gold miners into giving up their territory, an enigmatic man named “Preacher” (Clint Eastwood) arrives in town. Preacher fends off the attacks, and then goes directly to LaHood to negotiate. When the miners, led by Hull Barret (Michael Moriarty), refuse the terms, LaHood sends in Marshall Stockburn (John Russell) to take down Preacher and the others.

Review: Clint Eastwood stars in this classic Western which I consider a perfect companion piece to High Plains Drifter as he plays a similar mysterious character who appears out of nowhere to save a group of people desperate for help.

In High Plains Drifter Clint is known only as The Stranger and is an avenging angel that feels like he has crawled out from the depths of Hell. He is there to help but isn’t afraid to rape women when the mood takes him making him a far more complicated character to empathise with.

In Pale Rider he is an angel of death known only as The Preacher and he comes to the rescue of Hull Barrett (Michael Moriarty) when he is being attacked by some local thugs. They are determined to get rid of him and his family from an area of land so Coy LaHood (Richard Dysart) can have full access to it for “progress”.

The Preacher is one of Eastwood’s best characters as he is the invincible badass who is always one stop ahead of his enemies but still sympathetic and of course endlessly cool with lines like “you shouldn’t play with matches”. Barrett and his people aren’t violent and just want to be left in peace to prospect for gold but LaHood’s son Josh (Chris Penn) and his crew won’t leave them be. When The Preacher shows up and stands up for Barrett, La Hood and his men are shocked as Barrett and his friends were near breaking point. Thus begins a battle of wills between LaHood and the prospectors that will only end one way – bloodshed.

This is one of Chris Penn’s most memorable roles and he is truly hateful as Josh LaHood; at one point he attempts to rape Megan (Sydney Penny) but is stopped by The Preacher. That is a tough scene to watch but thankfully it doesn’t go on too long. I always felt he didn’t get a satisfying enough comeuppance at the end as he deserved to be riddled with bullets.

Pale Rider wastes no time getting started with the first raid on the prospector’s land as visceral as can be with the horses trampling through the small makeshift town and one of the thugs even shoots poor Megan’s dog. She prays to god that a miracle will come and save them and so enters The Preacher…

There is more to The Preacher than meets the eye and he clearly has a past but we never find out what it is; this makes him endlessly fascinating proving that you don’t need to give a character huge backstory in order to root for them.

There are several shoot-outs throughout with the climactic battle between Preacher and 7 Marshall’s easily the highlight as he moves with supernatural ease to take each of the Marshall’s down one by one.

I love Richard Kiel’s silent giant who is working for the thugs but after he is bested by The Preacher he sort of becomes his protector. It was only on my most recent viewing that I noticed Billy Drago was one of the Marshalls; he doesn’t have any dialogue but it’s still cool to see him face off against Eastwood.

When I was younger I associated the music to the UK Channel 4 News with this movie but that theme was only ever used in the trailer for Pale Rider (see below); the score itself isn’t especially memorable but it has a darkness and mystery to it which works well for the film’s tone.

Pale Rider looks fantastic with the mountains making for a stunning backdrop and director Eastwood knows exactly where to place the camera in every scene.

Overall, Pale Rider is one of my favourite Clint Eastwood movies with plenty of action, an engaging story, memorable dialogue and stunning vistas making it a must-see for Western fans.