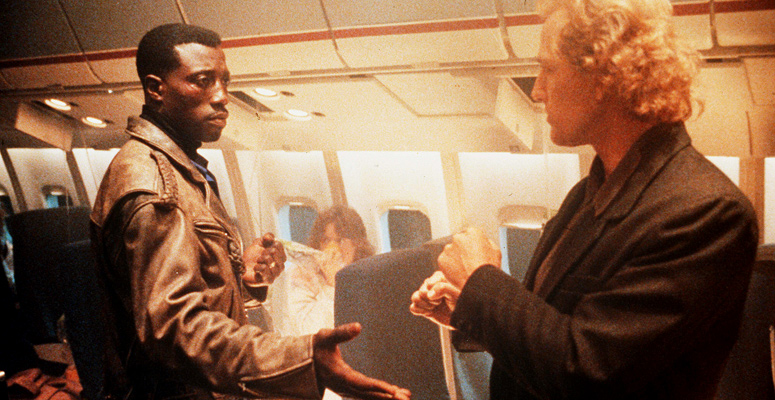 It’s been far too quiet these days on the Wesley Snipes front so I thought it was time we hearken back to the golden age where Snipes is in classic action hero mode. Passenger 57 is one of the most quotable action movies of the 90’s and Drop Zone has some impressive action but which is the better movie?

Plot: An airline security expert must take action when he finds himself trapped on a passenger jet when terrorists seize control of it.

Even at the initial time of release this movie was cheesy but by God is it ever fun. Bruce Payne hams it up more than a Sunday dinner and clearly has a ball as the terrorist villain Charles Rane. Snipes plays John Cutter, the badass who has to bring Rane to justice; how he says some of the lines without laughing is a feat in itself.

The acting in the movie is ropey at best but the dialogue is hilariously awesome with such classic lines as “always bet on black!”

You also have a side order of Tom Sizemore who is always worth watching; and yes that is also Liz Hurley as one of the villains.

The movie is well paced with plenty of action and Snipes has rarely been a bigger bad ass. It has a cool score which adds to the action and amps up the tension in the right moments.

The story is so ridiculous that you just have to sit back and enjoy it, while drinking copious amounts of beer.

Plot: “A team of skydiving crooks led by DEA-agent-turned-bad Busey specialize in landing on police roofs and breaking in so their evil computer nerd can steal undercover agents’ files and sell them to drug lords. Federal Marshal Snipes lost a brother to this crew and learns skydiving with the help of tough-but-lovable instructor Butler so he can track them down.”

This is one of my favourite Wesley Snipes films and was clearly cashing in on the success of Point Break; and why not? Point Break is a classic!

There is some (pretty) decent aerial photography in his movie but unlike Point Break there is a bit too much obvious blue screen here. It is kind of off-putting as it takes you out of some of the action.

Drop Zone also steals a cast member of Point Break; the one, the only GARY BUSEY!! He’s on villain duty in this and practically owns the movie. You also have Yancy Butler from Hard Target who is believably tough yet heroic.

The plot isn’t all that original and does feel a bit too similar to several other movies but there’s still plenty to enjoy here.

Overall, Drop Zone has a great cast, some decent action and an awesome score, but is let down by blue screen and a lack of originality.

I actually think Drop Zone is the better movie with an awesome music score and a Gary Busey flavoured villlain but for the more memorable/quotable action flick with a hilariously over the top villain and Wesley Snipes on classic form then Passenger 57 wins every time.