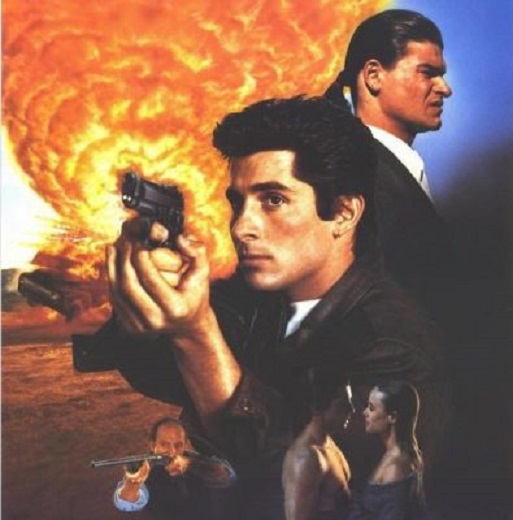 Payback is pretty forgettable but there are some entertaining moments with Michael Ironside owning every scene.

Review: Not to be confused with the Mel Gibson film of the same name, Payback is a 1991 actioner that stars Don Swayze, Corey Michael Eubanks and Michael Ironside.

It got my attention from the entertaining opening scene with Clinton Jones (Eubanks) escaping prison/labour duties so he can get revenge on the drug dealer who screwed him over. After that Clinton goes to a small town and gets a job at a gas station and then… nothing much really happens until the end.

Eubanks is a pretty likable lead but I enjoyed how he was kind of a smug dick to people at times and when he starts making moves on the town bully’s girl things almost get exciting. The problem with this movie is that it kind of builds up and you’re expecting something interesting to happen but it’s quite slow with too much time spent with Clinton and Shelly.

Although it’s not an amazing movie but there are a few enjoyable moments mostly brought by Ironside who elevates any movie he is in. With Payback he plays the Sheriff of the small town who discovers that newcomer Clinton is actually an escaped con. Rather than report him to the feds however, he decides to use him as the bust will make the Sheriff look good. I wasn’t quite sure what to make of the Sheriff character at first and wondered if he was a good guy or villain but all is revealed by the end and it’s arguably the most satisfying part of the film.

It all wraps up a bit too neatly at the end and stretches credibility at certain points but the climactic shoot-out is decent.

Overall, Payback is pretty forgettable but there are some entertaining moments with Michael Ironside owning every scene. Worth a rental if you can find it. It’s one of the many VHS tapes I picked up recently.