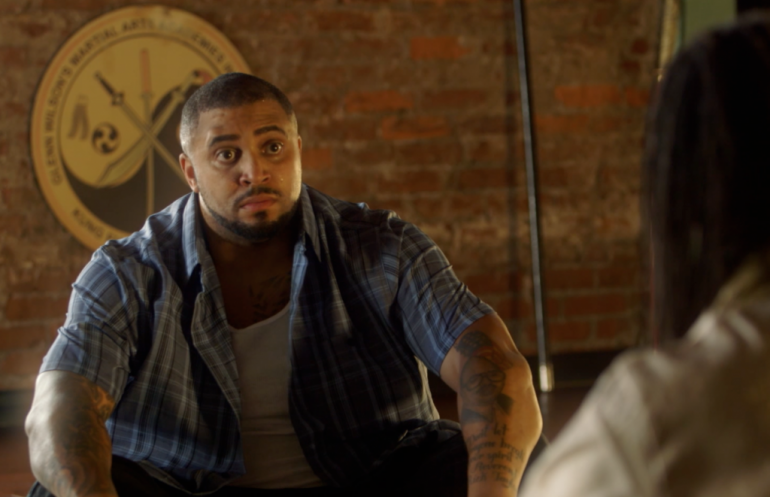 Paying Mr. McGetty is dare I say it, a cute little oddity with a fun atmosphere and a cast who are just there to enjoy themselves.

Plot: After a night of drinking and gambling, Tyrell (R. Marcos Taylor) is awakened by an angry call from his girlfriend, Meena (Anita Clay) and finds himself in bed with a strange woman, Cecelia (Alissa Schneider) — a local mob boss’ daughter. Once the local mob boss finds out, he hires Shota (Wilson) — a relentless hitman. To make matters worse, the reward on Tyrell’s head has dozens of others looking for him, too. Adding to Tyrell’s troubles, the worst thing of all… Meena, the love of his life, is put in harm’s way. Tyrell must make a stand by taking on the mob, taking on Shota, and finding the money to pay their landlord — Mr. McGetty — before the day ends.

Review: Paying Mr. McGetty is unlike any other movie I’ve watched this year or any year for that matter.  It’s a low budget affair starring Don “The Dragon” Wilson in a supporting (but pivotal) role; he’s an enforcer called Shota Kabu who beats people up who owe his boss money. His main task in the movie is track a down on his luck loser named Tyrell (R. Marcos Taylor) and teach him a lesson for messing with a mobster’s girlfriend.

Tyrell is a very sympathetic protagonist as we’ve all had days where it feels like everyone is out to get us… in his case they actually are. His girlfriend is nagging at him over the phone trying to get him to pay the rent (fair enough) while he is driving around town making deliveries for his boss Mrs. R (Forbes Riley). He also has to avoid mobsters and assassins who are all after him so he really is not having a good day. At various points Tyrell stops off in a music studio as he tries to (desperately) make a success at something and there is a moment where he breaks down in easily the most moving moment of the film.

The movie has a charming and gentle of sense of humour and although it is rarely hilarious it may give you a gentle smile. For the most part it is pretty family friendly although there are a few jarring moments; one moment which stood out is Shota confronting someone in a hotel room as he is coming out of the shower and pulling out a towel from under him; he slips and splits his head open which kills him. Then it plays some playful music as if something funny just happened but I was thinking “you just …murdered… someone…” so that left a strange taste in the mouth.

Other than that, there are several nicely done fight scenes (choreographed by John Kreng) where we get to see Wilson demonstrate that he can still kick ass with the best of them. A highlight is Wilson facing off against Demetrius Angelo in a parking lot with smooth moves and camera work that lets us see the action.

Paying Mr. McGetty is not exactly excitingly paced and there is some pretty dodgy acting by the supporting cast and frankly you could probably destroy the movie critically if you felt so inclined but I found it difficult to bear any ill will towards the movie as everyone seems to be enjoying themselves and it’s harmless fun.

Overall, Paying Mr. McGetty is dare I say it, a cute little oddity with a fun atmosphere and a cast who are just there to enjoy themselves. It should be out in 2017 so go in with an open mind and you might come out with a smile on your face.