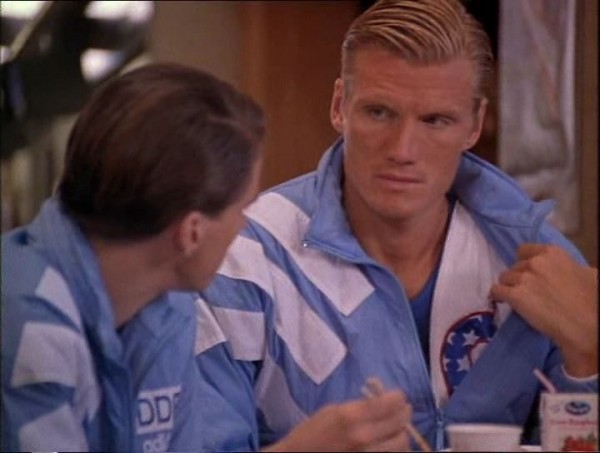 If it’s wall to wall action you’re looking for then Pentathlon isn’t for you but if you’re willing to watch Dolph try something very different then it’s definitely worth a look.

Plot: An Olympic gold medalist escapes to freedom in the US, only to be tracked down by his sadistic ex-coach.

Review: Dolph Lundgren once again proves that he is never afraid to take risks when picking his roles; Pentathlon is probably one of his best films in terms of story and characters.

David Soul is fantastic as the sadistic Neo-Nazi coach Heinrich Müller; at first he comes across as stern and a man who demands perfection but as the story progresses we discover that he is in fact utterly insane.

He pushes his students to the absolute limit and when he tells Eric Brogar (Dolph) to cheat using enhanced blood, Eric resists and ultimately defects to the US (after being shot in the leg).

This is when the story gets interesting. We expect that  Brogar’s life will be transformed for the better when he arrives in the States but it’s quite the opposite. Eric is surprisingly a bit of an arrogant ass and not very sympathetic. He struggles to find his place in America and without Müller’s discipline and an injured leg he starts smoking and drinking, descending into self-pity.

It takes a Café owner called John Creese to teach Eric some humility but he also encourages him to get back in to what he was born to do.

What ensues is a surprisingly inspirational tale of overcoming adversity with Dolph playing one of his most complex characters.

It is a little slow though and there isn’t that much in terms of action; the score is also a bit cheesy sounding but it’s not too bad.

Pentathlon was also quite unpredictable with a story I really hadn’t seen before (or at least not often) and the acting in general was first rate; Dolph’s German accent was pretty good too.

Creese was incredibly likeable and remained patient with Eric, despite him being a jerk but all credit needs to go to David Soul. Müller is not an over the top villain but very controlled which is what makes him scarier.

Overall, if it’s wall to wall action you’re looking for then Pentathlon isn’t for you but if you’re willing to watch Dolph try something very different then it’s definitely worth a look.