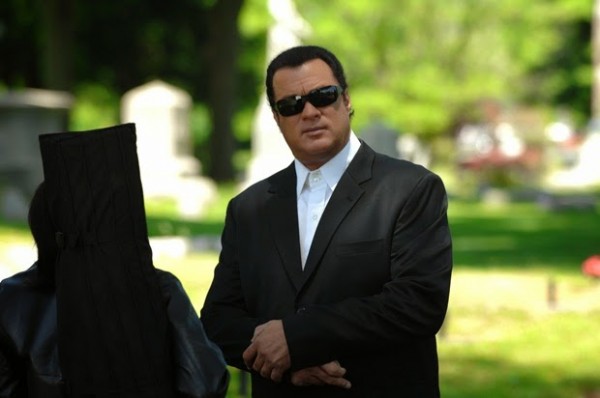 Pistol Whipped is better than a lot of Seagal’s output over the past few years with an engaging story and decent action which is different from what you might expect.

Plot: Matt is an elite ex-cop whose life has gone downhill since he was kicked off the Force. After a rough encounter with a mysterious henchman, Matt is brought face to face with his only chance at reclaiming his life and clearing his gambling debt markers. Only after he gets started on his new tasks does he recognize good guy from bad. Meanwhile Matt’s love for his only daughter helps him battle one of his greatest enemies, alcoholism.

Review: Steven Seagal stars in what is arguably one of his better movies from the past decade; it’s quite a different role for him for once where he plays a drunken gambler who doesn’t spend enough time with his daughter. I didn’t hear any mention of his ex-CIA past in this story either which was definitely refreshing.

Lance Henriksen has a small role as the mysterious “Old Man” and we’re never really sure whether he’s good or bad. Paul Calderon plays his henchmen Blue who just might not be as evil as we first think either; that’s what was interesting about this movie is that the characters weren’t just one-note heroes/villains. They are people who have made choices, some are good and some are bad and they have to deal with the consequences.

The acting is surprisingly decent for the most part, aside from Seagal who you can barely understand as he mumbles through the dialogue.  It also takes a little while for the action to kick in and goes on a bit longer than it maybe needs to.

The final 20 minutes has some nicely executed action scenes and as it’s from director Roel Reine (Dead in Tombstone, Death Race 2 & 3) then it won’t as much of a surprise. He’s a man who can do innovative action with very little budget. There’s nothing that will blow you away but the final shootout is well done and the use of blood squibs rather than lazy CG blood is always a plus.

It’s always fun watching Steven Seagal bitchslap bad guys but he doesn’t do quite as much in this as you’d maybe like. At least he actually says his own lines though and isn’t dubbed over like in some recent fare.

Overall, Pistol Whipped is better than a lot of Seagal’s output over the past few years with an engaging story and decent action which is different from what you might expect.