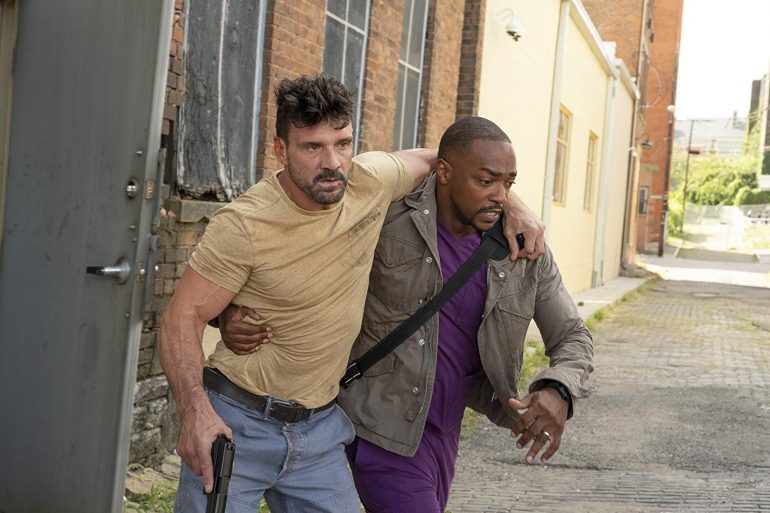 Point Blank is worth watching for Frank Grillo doing what he does best and his banter with Anthony Mackie makes for a good time. It has no shortage of action and is pleasingly short so I’d recommend checking it out.

Plot: To save his pregnant wife, an emergency room nurse teams up with an injured murder suspect in a race against time, rival criminals and renegade cops.

Review: I need to put on the record that I haven’t seen the original Point Blank so I am judging this purely as a film in its own right. Frank Grillo is one of my favourite actors today and he is also one of the hardest working as he has several movies coming out over the next few months. When playing a villain he can come across as threatening and believable but he can also play a sympathetic good guy and in Point Blank he is essentially both.

Grillo plays Abe who we meet as he is jumping out a window and being pursued by guys with guns; he is suddenly hit by a car and taken to hospital. His brother Mateo basically can’t function without Abe and ends up kidnapping the pregnant wife of a nurse called Paul played by Anthony Mackie. Paul is forced to break Abe out the hospital and escape the cops otherwise his wife will be killed. Abe wakes up and then the two men have to survive rogue cops, criminals and each other.

You get the idea from the trailer that this is going to be a diverting action comedy with Grillo and Anthony Mackie generally hurling insults at each other throughout and making for an entertaining buddy duo. It doesn’t exactly break any new ground but the two leads are appealing and the script has some great one-liners.

It’s just under 90 minutes and moves along at a fast pace and although the action isn’t all that spectacular there are fights, chases and shoot outs; it’s gritty in parts but the tone is generally pretty light with some black humour added into the mix.

It’s predictable stuff and you know early on how it’ll pan out but you can just sit back and enjoy the ride with two great actors clearly having a ball. Mackie and Grillo make for a fun duo with Frank obviously playing the tough guy and Mackie being the weaker of the two but he will do whatever it takes to save his wife and comes across as sympathetic.

Overall, Point Blank is a fun ride with two leads bouncing one-liners off each other with ease and although it may not reinvent the wheel it delivers the action goods and some solid laughs. I’d give it a watch with the usual copious amounts of alcohol and some buddies unless you don’t have any but in that case it means more beer for you.