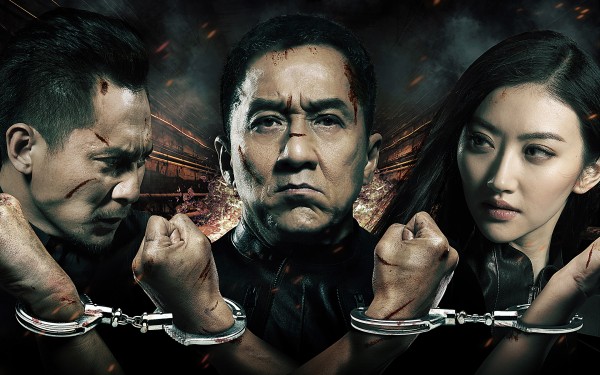 It takes a while to get going but Police Story: Lockdown shows a more serious side to Jackie Chan which I’m always happy to see. He gives a wonderfully world weary performance while still wanting to make things right with his daughter as well as saving the lives of others because he considers “every life precious”, even the villain which was a nice touch. There are no huge stunts so this is more subdued but definitely worth a reevaluation.

Plot: While visiting his estranged daughter (Jing Tian) at a nightclub, a police captain (Jackie Chan) must spring into action when an elaborate kidnapping plan unravels right before his eyes.

Review: Police Story: Lockdown (the US name for Police Story 2013) is the latest entry in the series with Jackie Chan now playing Zhong Wen and this is a far darker and grittier entry to the series than anything that’s come before. You know when your movie opens with Jackie Chan holding a gun to his head and pulling the trigger that this isn’t going to be one of Chan’s lighter movies.

For me this is a good thing as the humour sometimes got to be too much in the earlier entries of the series taking away some of the drama.

Chan has rarely been better in terms of acting, giving a serious performance playing a battered and bruised cop who is trying to make things right with his daughter. When they are both kidnapped, Zhong does whatever it takes to make sure his daughter is safe.

The first time I watched Police Story: Lockdown I found it to be rather dull but I don’t know what I was thinking as on my most recent viewing I thought this was one of Jackie Chan’s better performances and tonally different from many of his other movies.

Lockdown is incredibly stylish and has no shortage of action with several fight scenes but this isn’t Jackie jumping off buildings and being a superhero. In this he is older, world weary and has just come to visit his daughter who he has a bad relationship with. He ends up (along with several others) being held captive in a nightclub by Wu Jiang (Ye Liu) who  considers them responsible for the death of his sister.

Wu Jiang (Ye Liu) was an interesting antagonist because you could totally understand his motives; he wanted revenge for his sister’s death so both Jiang and Zhong were similar in that they would go to any lengths for family.

It’s nicely shot and has a bit of a Die Hard vibe going on and I liked that they tried something a little different. I found some of the flashy editing got a little confusing at times and it’s hard to keep your eyes on one thing. On the other hand it helps build up the tension and a sense of paranoia.

The action highlight for me is the cage fight where Chan has to face off against one of Wu’s goons and he gets badly beaten but his sheer willpower has him just come out on top. It’s a desperate fight and we rarely see Chan get so humiliated in an action scene so there are some bold choices in this movie.

Overall, Police Story: Lockdown benefits from several viewings to pick up everything that’s going on; it’s a different vehicle for Jackie Chan and has become a bit of a favourite in terms of his modern fare as this is gritty and brutal with little of Chan’s trademark humour.