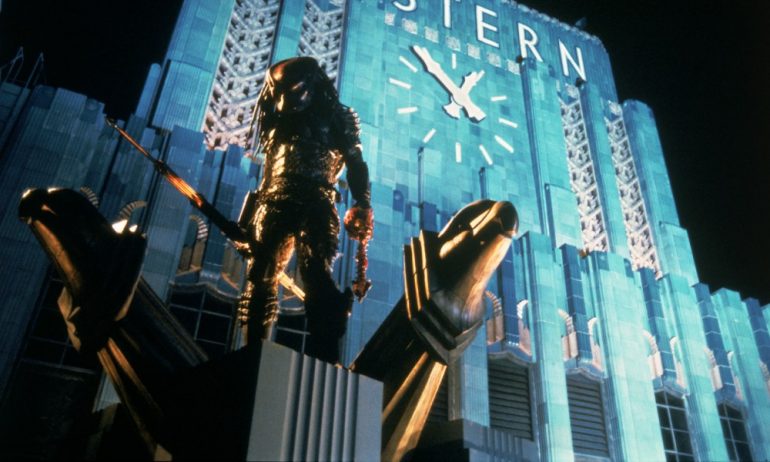 Predator 2 doesn’t deserve a lot of the hate and yes I miss Arnie but for me the star of this movie is the Predator himself. There are some great action sequences and gore, a fun supporting cast and it moves along at a great pace.

Plot: Amidst a territorial gang war, a sophisticated alien hunter stalks the citizens of Los Angeles and the only man between him and his prey is veteran L.A.P.D. officer, Lieutenant Mike Harrigan.

Review: I think Predator 2 gets a bad rap and I actually love it nearly as much as the original; the first one will of course always be the best but this movie still has a lot going for it.

This time Arnold Schwarzenegger is replaced by Danny Glover, which was an odd choice as he wouldn’t really be much of a physical threat to the alien hunter. Like Dutch though, it’s all about using your brains to outsmart the Predator and Lieutenant Mike Harrigan (Glover) holds his own nicely.

I have to admit though that I always found Harrigan to be quite an unsympathetic character as he’s just an asshole to pretty much everyone but then I realized, there’s a war going on and he has to be tough in order to survive.

The supporting cast is impressive including Gary Busey, Robert Davi, Bill Paxton (who has some choice lines) and Maria Conchita Alonso who plays a complete badass; the polar opposite of her annoying character from The Running Man.

Gary Busey is as bonkers as always but his scenes with Glover are filled with tension and it’s also a nice little nod to the first Lethal Weapon.

The film opens in the far-distant future of 1997… errr, anyway there is a war going on for the streets of Los Angeles and bodies are dropping like flies. It’s a real attention grabbing opening scene and sets the pace for the intensity of the rest of the movie.

Where the first Predator was tension and build up in the first half, Predator 2 really ups the action and even has some of the best action sequences of the series. I know I talk about this a lot but the subway scene with the Predator attacking armed commuters remains one of the all-time great action sequences as it’s nightmarish and yet awesome at the same time.

I like how even in all the chaos he leaves Maria Conchita Alonso alone because she was pregnant, so he doesn’t consider her a potential enemy.

There is also plenty of gore in this one and the extra threat of the Jamaican posses adds something a little different to the story.

The finale in the spacecraft is actually now pretty legendary with multiple Predators appearing; one of them hands Hartigan a gun from over a century ago proving that these creatures have been hunting humans for many years. We also get our first glimpse of an Alien skull hinting at Alien vs. Predator… which sadly wasn’t worth getting excited about.

Alan Silvestri returns to provide another excellent score maintaining all of the original themes from the first movie; the music manages to really add to the tension and stays quiet when it needs to but gets explosive during the action scenes.

Overall, Predator 2 doesn’t deserve a lot of the hate and yes I miss Arnie but for me the star of this movie is the Predator himself. There are some great action sequences and gore, a fun supporting cast and it moves along at a great pace. Want some candy?