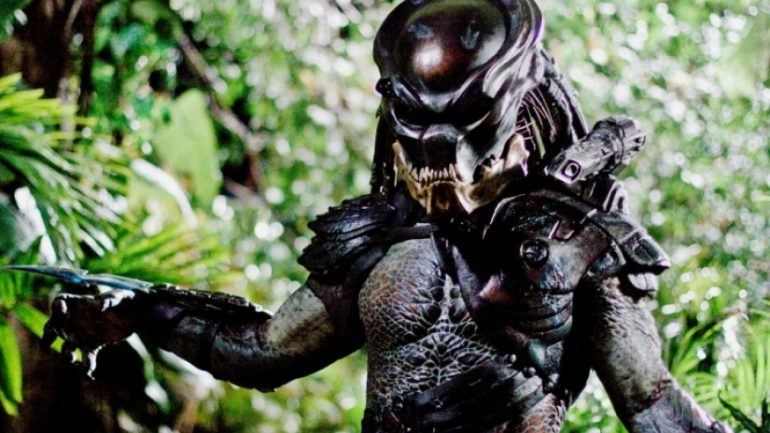 Predators is a a fun ride but it lacks the intensity of the first two movies and I did find the pacing dragged in parts. I still would have liked a sequel to see how they got off the planet but maybe we’ll get a comic to explain that some day.

Plot: A group of elite warriors are hunted by members of a merciless alien race known as Predators.

Review: Although it wasn’t a massive box office success, Predators is still very much a worthy addition to the canon. I still would have preferred if it had been Robert Rodriguez’ original script which featured the return of Dutch but this has plenty in its favour.

The biggest surprise was just how badass Adrien Brody is as Royce; he’s pretty huge in this movie and does the growling voiced hero well. His character is interesting too as we aren’t quite sure what his angle is or if he is just out for himself.

The supporting cast includes Danny Trejo, Topher Grace, Alice Braga and Laurence Fishburne which should make it engaging but sadly the scenes with Fishburne practically kill the pacing and go on for far too long and it would have worked better if it was Danny Glover or Arnie instead. You can also see the “twist” involving Topher Grace’s character coming pretty early on.

Danny Trejo is killed off in the first twenty minutes and was utterly wasted in the role; you don’t cast Machete and then do nothing with him!

Predators feels a little too similar to the original film once again taking place in the jungle; it may be an alien planet but it looks too much like Earth; you can’t help but feel it doesn’t really add anything new to the mythos other than the Predator dogs which were a cool idea.

The opening scene with Royce plummeting to the ground is a real attention grabber and provides a nice shot of adrenaline; the characters then find out they have all been kidnapped and dumped in this jungle with no idea why they are there.  As the story progresses and we find out that they are in fact the real Predators, things get interesting and the enemies they face aren’t just monsters.

Speaking of the monsters, the Predators have had a bit of a makeover and we are introduced to a new species which is every bit as hideous as the original creature; the only thing which bugged me is that they took away the Predator’s roar and made them sound different which was annoying.

The climactic fight between Royce and the Predators is a nice nod to the original and doesn’t skimp on violence; the film has a few choice moments of gore actually, although I think the first two are probably more bloody and intense.

I thought the sword fight between Hanzo and the Predator was nicely done too as it gave the Predator another chance to show it has a sense of honour, which is a core element of all the movies.

John Debney provides the music score this time and thankfully he keeps Alan Silvestri’s themes and just adds his own sound to them, mostly adding some electric guitar which is thoroughly awesome.

Overall, Predators is a decent addition to the franchise and it’s a shame we never got a follow up as I really liked the character of Royce; maybe Shane Black’s impending reboot may include him but I sadly doubt it. There are some pacing issues in this one and it’s not as tense as the original but it’s pretty damn close.